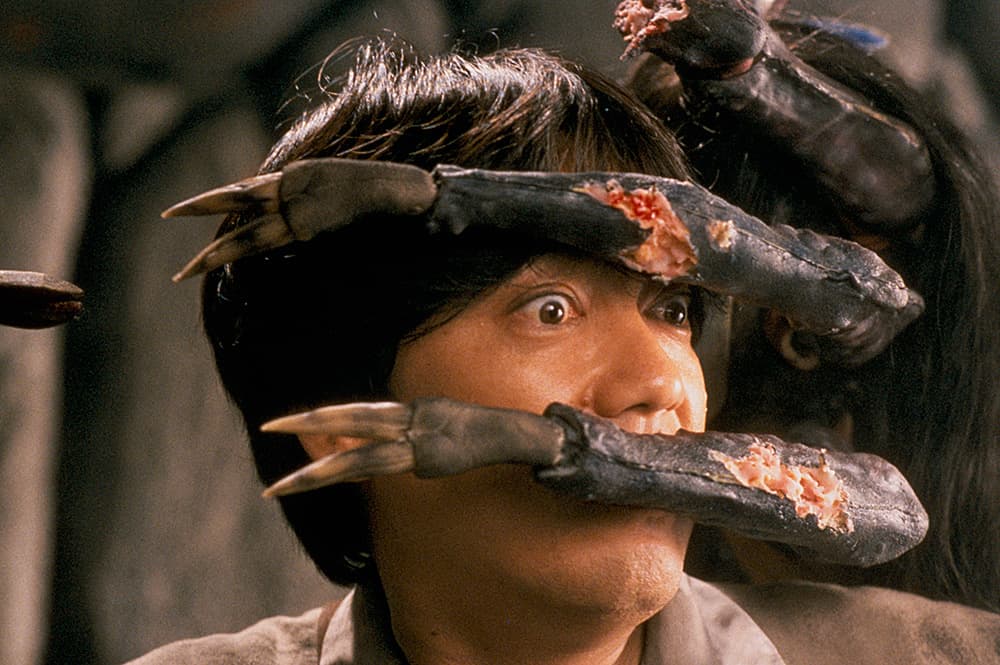 After Shinya Tsukamoto burst onto the international festival scene with Tetsuo: The Iron Man in 1989, his first feature after having produced a number of Super-8 shorts, he soon became a cult favourite, the B&W 16mm cyberpunk nightmare still enjoying incredible popularity amongst midnight movie fans today. Unsurprisingly, this meant that there was a great deal of interest in his next film, which arrived in 1991 in the form of Hiruko the Goblin, based on a manga by Daijiro Morohoshi. It’s fair to say that the film received a mixed reaction, mainly due to just how different it is to Tetsuo, being a bizarre, hard to describe affair, and as a result it’s remained relatively underseen compared to the rest of Tsukamoto’s filmography. Curious fans now have a chance to rectify this, with the film receiving a new Blu-ray release from Third Window, coming in a remastered HD version and with a host of extras.

The film is set in a small, Ghibli-esque countryside town, where archaeologist Hieda (popstar and actor Kenji Sawada, later in Takashi Miike’s musical The Happiness of the Katakuris) arrives after having received a mysterious letter from his teacher brother-in-law Yabe (Naoto Takenaka), who went missing along with several others after discovering an ancient tomb on the school grounds. An eccentric inventor who believes in yokai spirits and goblins, Hieda teams with Yabe’s son Masao (Masaki Kudou) to investigate, and they soon discover that the tomb is part of a burial mound housing some kind of gateway to hell, with the disappearances being the sign of a coming demon invasion.

Following a debut like Tetsuo always going to be a tough act, and it’s easy to see why Hiruko the Goblin received the reaction it did, being a film that still stands out from Shinya Tsukamoto’s other works, eschewing his usual visual and aural assaults on the senses in favour of a more whimsical kind of weirdness. At the same time, though wildly different, Hiruko is still a film with a great deal to offer, and one which is impressively unconventional in its own way – mutterings of Tsukamoto having taken on the manga adaptation as a director for hire are a little unfair, and it’s more a case of the film revealing another side of his talent and imagination, and showcasing just how versatile a filmmaker he is.

These differences perhaps shouldn’t be too much of a surprise given that Hiruko was a big change for Tsukamoto in many ways as a production, seeing him going from garage grunge to having a budget, and with a shift in focus from urban decay and body horror to an idyllic countryside setting and a mix of folklore and Lovecraft cosmic terror. Various western horrors have been cited as influences, though while Alien, Evil Dead 2 and John Carpenter’s The Thing all loom large, it’s Nobuhiko Obayashi’s 1977 classic Hausu which the film most recalls, with a similar sense of the surreal, alternating between oddball comedy and nightmarish visions, with moments of haunting beauty scattered throughout. The film features lots of effects and visual trickery, ranging from practical makeup and stop-animation through to inventive use of matte overlays, all of which has aged very well, giving the proceedings a far more magical and other-worldly feel compared to more modern CGI-packed genre productions. There’s lots of action, and while the film doesn’t always make much sense, it’s never dull, and is consistently surprising and unpredictable throughout its short running time, if in a less abstract manner than in Tsukamoto’s other works.

Hiruko certainly looks fantastic in its new HD restoration, which makes for a massive upgrade on older DVD editions, and which really helps to bring out the intricacies of the practical effects and production design. As well as the usual trailer and a commentary by Japanese film expert and writer Tom Mes, the new Blu-ray also comes with a solid set of interviews including a new chat with Shinya Tsukamoto looking back on the film, as well as an archive interview, plus an interview with Takashi Oda on the creature effects, accompanied by a short featurette.

Hiruko the Goblin is a film well-deserving of rediscovery, and while still likely to be a bit of a surprise for Tetsuo fans, its status as one of Shinya Tsukamoto’s lesser works is in need of re-evaluation. Tsukamoto has continued to prove himself a filmmaker of singular vision, and though his second feature is more on the wacky side of bizarre, it’s nevertheless a highly entertaining film that’s rich with creativity and visual flair.

Hiruko the Goblin is available on remastered Blu-ray from 24 January from Third Window Films.