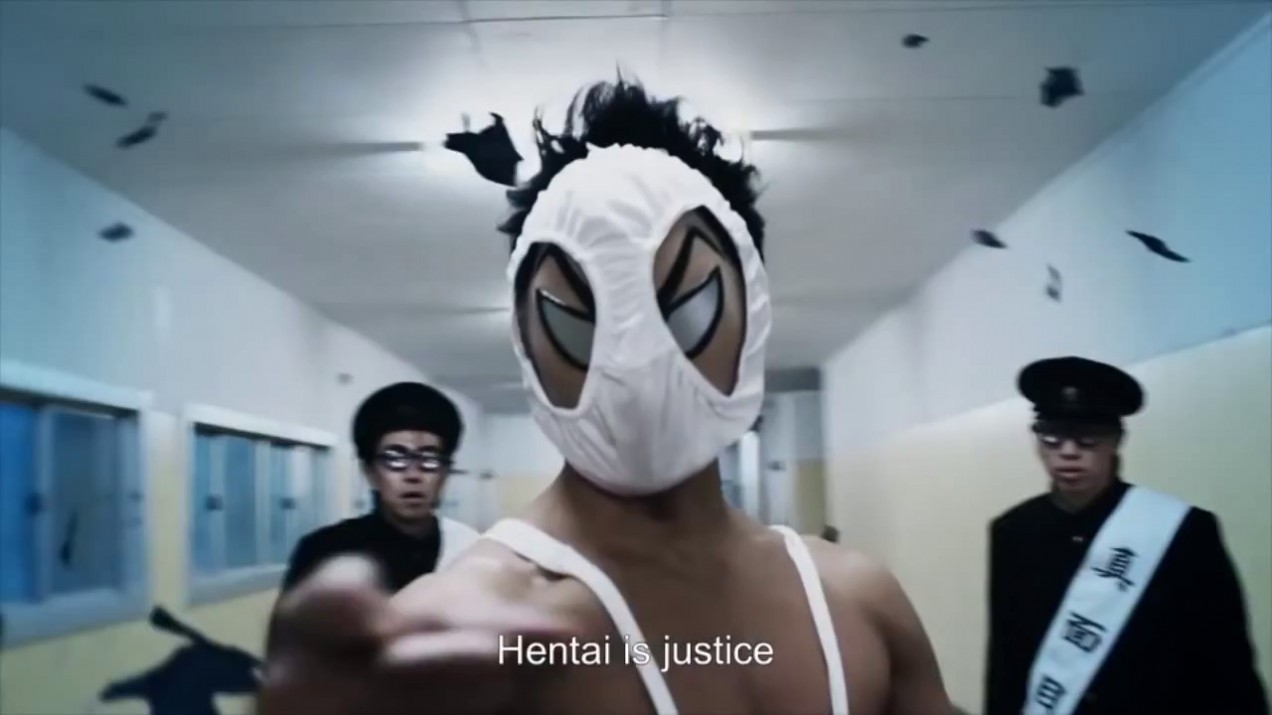 Except, this film doesn’t really make its mark. Unfortunately the humour provided may have worked in a graphic novel, but it crashed and burned on screen. The comedy shown was neither clever nor original and they make no attempt at trying to gain a greater audience other than the original manga fans. If you aren’t familiar with the bizarre and outright twisted comedy that Japan turns out once in a while, you will probably find this offensive and simply outrageous.

The story follows Kyosuke Shikijo (Ryohei Suzuki, Tokyo Tribe, Judas, Gatchaman) who has recently lost his father but seems to be occupying his mind and excelling at martial arts in his school’s fist club. As well as obsessing over girls like all teenage boys, he also has quite a bizarre secret. Kyosuke likes to wear ladies knickers, except he wears them on his face and transforms himself into ‘Pervert Mask’, gaining superhuman powers. When classmate Aiko (Fumika Shimizu, Kamen Rider, Avatar, Seki Seki Ren Ren) along with a group of students are being terrorised by a horrible teacher it is down to Kyosuke and his lady pants to seize the moment. Except he can only access his special powers if said knickers have been worn. I know, I know ludicrously crude right but this is the only way to save his classmates. Clad in practically nothing, pants on his head it is down to Kyosuke to save the day and in turn win over Aiko.

Certainly not the standard issue superhero but hey, he is still wearing the pants just on his head. It is apparent the eastern world was likening this character to Spiderman, as we see his sweep majestically through the city and effects over his eyes creating a spidey look. Nevertheless, ‘Pervert Mask’ stands out amongst the crowd, but at no point does this wow you. There is no wow factor, there is only why factor. Of course, this film has its moments and all you can do is laugh at the ridiculously perverted things the characters do and say throughout this film. However, the question that screams at you is ‘Why turn this into a film?’ Perhaps this sort of comedy should have been left in the pages whence it came.

Putting the horrendous comedy to the side, this film offers us an insight into why people are they way they are. In this case it is down to Kyosuke’s somewhat dysfunctional childhood. Having a masochistic detective as a father and a mother who is somewhat of a sadist, constantly carrying a whip in her hand is more than the average upbringing. It’s obvious the filmmakers were trying to get a bit of back story in taken previously from the manga, yet they focused very heavily on ‘Pervert Mask’ bizarre super powers.

By the by, HK: Forbidden Superhero is definitely not a film for everyone. And if you watch it, just prepare yourself for a very off the wall production.

HK: Forbidden Superhero is released on UK Blu-ray and DVD on Monday, 15 September by Manga Entertainment.

Gloria Daniels-Moss
A former student and graduate of Canterbury Christ Church University where she had the pleasure to study English and most importantly Film! Her main love for Japanese Cinema comes from seeing Spirited Away when it was screened at Pinewood Studios for Club 7 at the mere age of 11... more
Read all posts by Gloria Daniels-Moss