In Hot Soup magic is technology, love is chemistry, and fate is an algorithm. Chinese filmmaker, Zhang Ming, returns behind the camera after his seventh fiction full-length feature, Pluto Moment (2018), premiered in Cannes and travelled the film festival circuit. Amidst this year’s disarray in film production, the director carved time in between teaching at Beijing Film Academy to complete his next work – sci-fi influenced urban drama about four women and life-changing decisions. Since his 1996 debut film, Rain Clouds Over Wushan, Zhang Ming explores the topic of relations between men and women set in a slightly uncanny environment, but it is the first time he directly incorporates sci-fi genre conventions into the narrative. In Hot Soup technology and nature come extremely close together as the characters are on the quest to look for happiness. Gamification worked wonders throughout centuries of development of human civilization, but is coincidence something that really can be put out of the equation?

Hot Soup follows seemingly unconnected stories of four women. A teenage daughter of a mafia boss is pressed to introduce her boyfriend as her parents urge her to marry and produce an offspring as soon as possible. A PhD student tries to get a recommendation letter from her supervisor, who advises her to change the topic of her dissertation. A 30-something executive argues with her tech-genius fiancé about starting a family, but is offered with an alternative solution instead. A young woman is determined to move to the U.S. and accepts the help of an Uber driver turned immigration consultant who is desperately in love with her. The logic of separate storylines get disrupted when objects and motifs start to travel between them, introducing doubt about the identities of the four main characters. Time gets out of joint until a pink bikini links all the intertwined stories in one moment of true happiness.

Although the story takes place in 2020, memories and alternative life paths are the basis of Hot Soup. The most interesting aspect of the narrative are the circulating objects – urban happiness survey, engagement ring, hairband, credit card, pink bikini, Buddha’s hand citrus fruit – that contain the four women’s memories and transmit them in between storylines. In Zhang Ming’s film, the past recollections are activated by concrete images, objects become artifacts of the characters’ past and present identities all coexisting as time within the film gets compressed into one year. The eponymous soup takes on many different shapes and meanings in the film: a medication that might improve man’s fertility, a steaming sticky rice ball soup which reminds the professor of his hometown in Ningbo province, a hot spring bath that male characters in the film are especially fond of. A hot soup echoes Proustian madeleine, but it is treated more as a remedy for unknown health issues, regrets or social pressures. For extremely goal-oriented women in Zhang Ming’s film, hot soup is only a means to an end: finding love, becoming a mother or migrating abroad. These different attitudes reveal the basic discrepancy between male and female characters in the film, the former representing romanticism whereas the latter reason. However, in both cases the function of hot soup can be viewed as part of the gamification of daily life, the process that should bring happiness and content to weary urbanites. 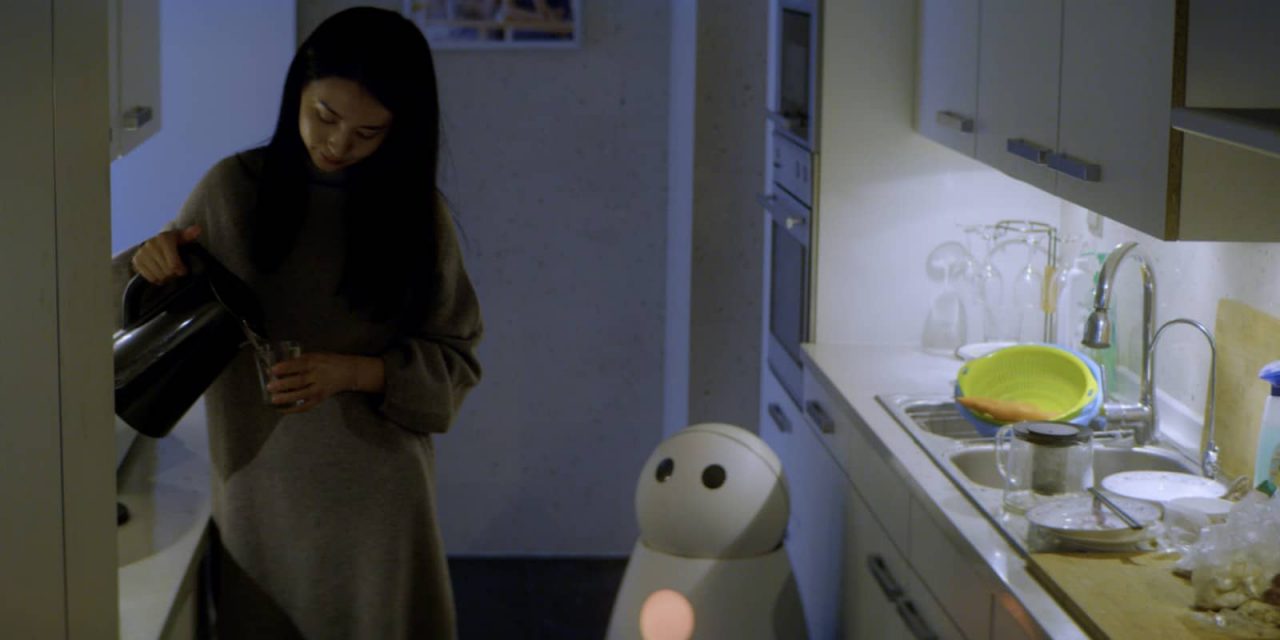 Although sci-fi motifs and technology brings some deliberate artificiality into the film, Hot Soup does not lack the quirkiness that makes it a perfect combination of art, genre and cult cinema. Scriptwriters Zhang Ming, Wu Ming, Liu Qinyu, Gong Yuxi draw from different cinematic traditions in presenting the four stories: gangster film, social or family drama, and indie postmodern romance. The plotline of the PhD student turns out to be the most substantial as well as ambiguous. At the outset, it looked like a story inspired by sex harassment cases at the universities in China (https://www.theguardian.com/world/2018/apr/18/metoo-in-china-fledgling-movement-in-universities-fights-censorship), but soon it proved the least generic and the most enigmatic of the four stories. Researching happiness is definitely one of the hot topics in Chinese academia, alongside thesis on emotions and affect, all backed up by surveys and large quantities of data that come useful in shaping society. As the saying goes, contentment brings happiness (知足常乐), but is it really true? The character of the professor questions this assumption. Spending his days in a secluded spa resort, surrounded by comfort and leisure, it is difficult to tell if he is enlightened, absolute hedonist or cowardly escapist. Watching the film I could not help but to recall the scene of a personal audience with a Cardinal in a steam bath in Federico Fellini’s 8½ but the meetings between the professor and the PhD student are different, filled with confusion, awkwardness and frustration on account of the young woman just trying to finish her dissertation and move on with her life.

However, Zhang Ming seems to have channelled some of his own teaching experiences into this character as the professor does give valid advice and sound supervision to the student. The filmmaker leaves the auteur mark on his latest work also by appearing in a customary cameo as one of the lawyers who handle the professor’s unspecified lawsuit.

In Hot Soup cinematography and the great choice of locations contributes to creating a feeling of simultaneous eeriness and familiarity of the cinematic world. At first, the editing feels random and it is quite difficult to grasp the rhythm and logic of the multiple plotlines, but once all are established it is easier to follow the four stories, especially when they start to intertwine. Dialogue-packed screenplay puts a lot of pressure on the actors. Chen Duling portrayal of uptight PhD student is a bit monotonous, whereas Thomas Price struggles a bit with the role of Chinese American IT engineer not living up to his fiance’s expectations. His performance varies somewhere in between romantic hero and serial killer, it’s a pity the character is not developed further beyond the family-centred plot. Li Meng as a cynical young woman constantly running errands and taking Uber rides is most charismatic, maybe because her character is the one audience knows the least about, so there is a lot of space left to imagine her alternative lives outside of the car.

In Hot Soup Zhang Ming presents a compelling vision of the contemporary world, in which it is almost impossible to differentiate technology from nature. Although the pandemic must have brought many additional obstacles to the production process, it makes the film even more timely, since 2020 gave many opportunities to evaluate one’s happiness, recall distant memories, contact old friends and search for lost time.