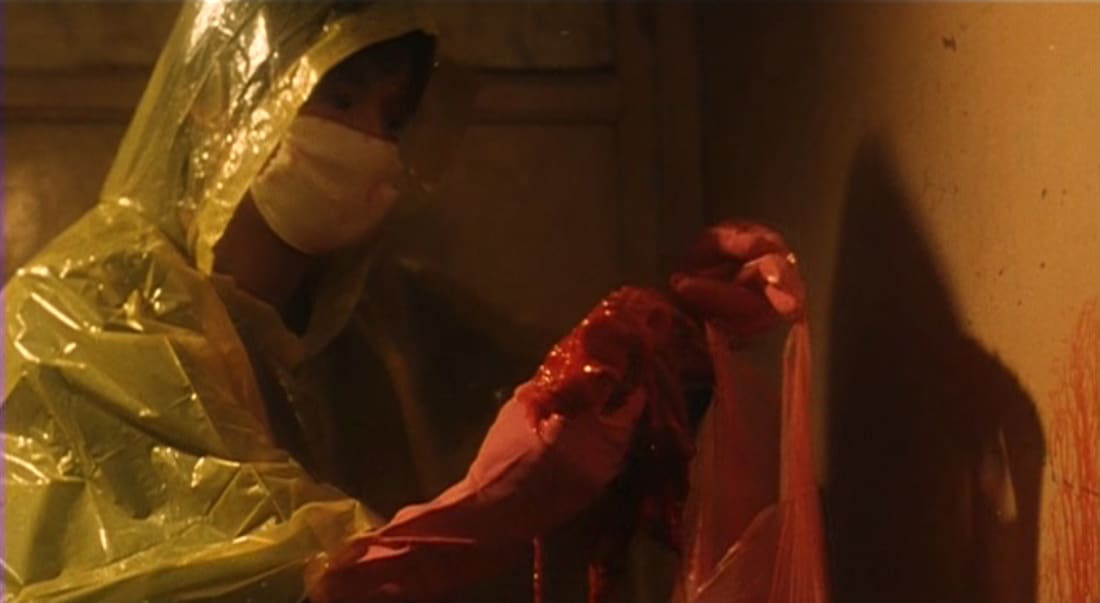 Human Pork Chop is a certain type of film, for a certain type of viewer. Seriously, given the title and the Category III rating proudly displayed on the DVD box, I’m quite sure that fans of more serious cinematic fare and those of a nervous disposition are highly unlikely to even consider watching. Which is probably a good thing, as Human Pork Chop is a film with no morally redeeming features of any kind, a lurid exploitation take on the infamous 1999 Hong Kong ‘Hello Kitty Murder Case’. I guess the only question that really needs to be answered here, for those who care, is whether or not the film lives up to its title.

The answer is a resounding “yes”, as even without a great deal of actual gore, this is one of the nastier, more sadistic and downright repugnant examples of the Category III genre. Everything about this film is unpleasant, nihilistic and just plain rotten, so much so that you’d swear you could actually smell it. To some, this may be a recommendation; to all others, you may want to wash your hands after just touching the DVD case.

The plot begins with the gruesome discovery of the bones and body parts of a missing prostitute Grace Li (Emily Kwan, Dr. Lamb). The police arrest the top suspects, namely her drug-dealing pimp Chan Wan Hok (Wayne Lai Yiu-Cheung, Last Ghost Standing) and his cronies Yang Joe Fai (Sai-Wing Yip, The Wicked Ghost III: The Possession) and Cheung Wai Kei (Sammuel Leung, Crime of a Beast) and drag them in for questioning. After a little bullying and persuasion, we are gradually told in flashback how the unfortunate Grace met her awful fate, being kidnapped, imprisoned, humiliated, degraded, tortured, and finally killed after stealing money from the vicious Hok.

Even for those not familiar with the real-life case, the above synopsis isn’t spoiling anything, as right from the start it’s made very clear that Human Pork Chop is only spiralling down towards one depressing outcome, the film being another entry in the cannibal crime subgenre of Category III, whose high point remains The Untold Story. It is worth noting, however, that the unfortunate Grace is in fact made into soup, and not an actual pork chop, though I’m not sure if that’s really cause for complaint.

Confusingly, Human Pork Chop came out at the same time as There is a Secret in my Soup, which was also based on the Hello Kitty case, and which contains a great deal more sex (including an unbelievable scene involving a vacuum cleaner) while being a bit lighter on the nastier elements. Why the industry decided the world needed two films about the sadly true story of a prostitute being tortured and made into soup is beyond me, but for what it’s worth, Human Pork Chop has the edge, mainly due to the relentless, single-minded vileness on display. However, despite containing a lot of violence, sleaze and revolting scenes of degradation, the film is not particularly exploitative.

Director Benny Chan Chi-Shun shoots the odorous affair quite clinically and with an efficient pace, managing to avoid glamorising anything. As a result, the film is fairly successful as a true-life crime drama, and stands at least a little above most of its peers. Pretty much everything here is ugly and dirty, including the cast, and this adds an uncomfortable air of realism lacking in similar films. This is at least a change from the usual Category III attitude towards this kind of material, and it’s good to see a little gravity being displayed for once.

The cast is mostly made up of Hong Kong genre players, all of who are fairly convincing in their roles. Emily Kwan is actually quite good in the title role (so to speak), and manages to generate a fair bit of sympathy for her wretched character. Also worth noting is Yiu-Cheung Lai as the evil pimp Hok, who is a great example of calculated menace and barely controlled violence. Their good performances are a real plus for the film, and add to the overall believability.

The problem with this realism is that it’s kind of hard to know who the film is aimed at; there’s not enough blood for gore-hounds, not enough nudity or sex for sleaze fans, and the film is far too cruel and grim to be entertaining in the usual lunatic Category III fashion. At the end of the day, Human Pork Chop delivers exactly what it promises: a bleak, often nauseating, portrait of the final days of an unfortunate woman leading up to her drawn out and horrible death. Whether you want to bear witness to this is up to you.