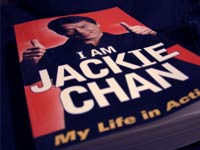 An insightful look into the life of Asia’s biggest superstar, as likable and endearing as the man himself…

Few could claim to be as much a part of Hong Kong cinema as Jackie Chan. From early appearances as a child actor in such films as King Hu’s classic Touch of Zen, appearing alongside Bruce Lee in Fist of Fury and Enter the Dragon, to his eventual phenomenal success and work as a producer – not just on action films, but also arthouse movies like Stanley Kwan’s acclaimed Rouge and Actress. Chan has been a part of every aspect…

Written as Rush Hour – the film that would finally establish Jackie as box office in the West – was about to hit the screens and playing on the title of his recent success Who Am I?, I Am Jackie Chan is as much an insight into growing up in Hong Kong as it is about their movies. It follows his life from his humble beginnings, growing up as the son of a chef for a the French Ambassador. Much of the book centres on growing up in a Chinese Opera school, recounting the hardships his master Yu Jim-yuen put him through. It all seems to have been worth it, though, considering the success not only of Chan but also his fellow schoolmates. They include Sammo Hung, Yuen Biao, Corey Yuen Kwai, Yuen Wah and Yuen Tak. (In fact it’s pretty hard to find a film in Hong Kong with out a Yuen in the credits.)

Gaining more work in film, Jackie eventually followed big brother Sammo for a career in Cinema. There were many false starts. Not least a time when he was contracted to Lo Wei, director of Bruce Lee’s first two movies The Big Boss and Fist of Fury, and groomed as ‘the next Bruce Lee’. To make matter worse, his first film was a sequel, New Fist of Fury. The comparison between Chan and Lee has stuck ever since, and it’s one Chan faces with much trepidation. Chan obviously respects Lee, who opened the doors for martial arts films, but could not be more different in style and has brought so much Hong Kong cinema that he simply doesn’t deserve to stand in the ‘Little Dragon’s’ shadow.

Lo Wei and Chan did not get on, and Chan found himself making movies he hated. They were also box office disasters! It wasn’t until he was loaned to Seasonal Films and teamed up with an older pupil of Jim-yuen’s school, director Yuen Woo Ping, that he found success. Not just success, phenomenal success! Between them, Yuen Woo Ping (who went on to act as action director on The Matrix and Crouching Tiger Hidden Dragon) and Jackie developed a formula based on incorporating comedy into a martial arts flick. It was based on visual humour straight out of Jackie’s love of silent movie stars like Buster Keaton, Charlie Chaplin and Harold Lloyd.

It was a style he would develop in later films and it went a long way to extinguishing the long line of bleak, Fist of Fury inspired revenge flicks that propagated the seventies. After finally breaking free from Lo Wei’s contract, success followed success. The American market, however, proved a lot more difficult. Totally miscast as a Japanese driver in Cannonball Run and working with Enter The Dragon director Robert Clouse (again that unfortunate comparison) on Battle Creak Brawl, where Chan was not allowed to use his vast experience of stunt coordination in the fight scenes.

Project A (1983) really made his name performing the daredevil stunts for which he would become famous. (And which would nearly cost his his life on several occasions.) The sequel and Police Story series followed, but as popular as these films are, from here on they are not really dealt with in great detail.

Considering his audience when this book was published, it seems rather awkwardly placed. Jackie reminisces over too many heartbreaks to be of much interest to his core Action fans, reveals too little of the films he has worked on to be of interest to Hong Kong movie fans. Yet his endearing narrative, constantly veering off on tangents, should appeal to everyone. Whatever Jeff Yang’s input, anyone who’s heard him interviewed or one of his audio commentaries (such as that on Gorgeous) will recognise this as quite genuinely Chan.

If anything, Chan comes across as very down to earth, normal even, despite his extraordinary life. As well as being Asia’s biggest superstars, if not one of the biggest in the world. This, as Chan himself points out, is very much a trait of Hong Kong actors and filmmakers They don’t even have time for pretension due to their immense output. He is extremely self deprecating about his mistakes, yet seemly his worst seems to be a spell of being headstrong and arrogant when he first became successful. There are also a few facts that are very hard to believe, particularly that his mother’s pregnancy lasted 12 months! Perhaps the most startling revelation comes from Jackie’s run in with the triads, they are a large part of the Hong Kong entertainment industry and have been since the turn of the century.

What comes through is Jackie’s loyalty to his Hong Kong audience, however successful he becomes in the west. He’ll never abandon them just to make movies in Hollywood, though this also makes him too conscious of the roles they expect him to play. Having had poor box office takes whenever he’s tried to stretch his roles – such as his impressive dramatic performance alongside Sammo in Heart of Dragon, Jackie is unwilling to make the same mistakes again. We will probably never see Jackie cast as a bad guy, for instance, as Jet Li played in Lethal Weapon 4 and The One. And that’s a shame, as we’re all missing out on seeing just what he’s capable of as an actor…

I am not Jackie Chan. Thank you and goodnight.

One thought on “I Am Jackie Chan: My Life In Action”