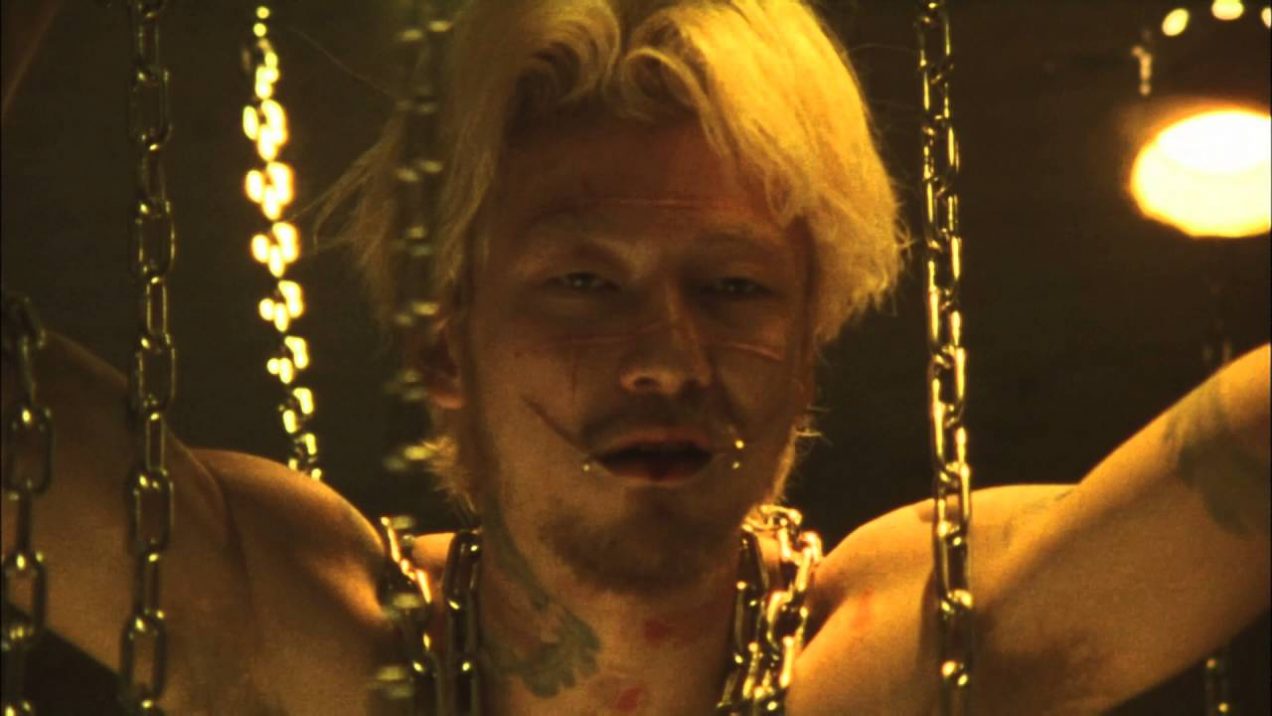 Even now, twenty years after its original release, Ichi the Killer remains one of Japanese director Takashi Miike’s most controversial works, no mean feat considering that it sits on his CV alongside the likes of Visitor Q, Lesson of the Evil and other notorious shockers. Indeed, for many, Ichi is the quintessential Miike film, a hyper-stylised visceral barrage of over the top gore, torture and rape, which hangs loosely on a threadbare skeleton of inconsequential plotting and which boasts a madman’s sense of logic. Whilst this is certainly true, as the film is incredibly grotesque and overwhelmingly sadistic, beneath the surface there lurks a fierce intelligence, antagonising and unapologetically provoking the viewer as much through its narrative and themes as its savagery. As a result, the film works on two levels, either as an archetypal example of pulp comic book splatter cinema (unsurprisingly, given that it is in fact based on a manga by screenwriter Hideo Yamamoto), or as an almost avant-garde exploration of filmic violence and audience implication in onscreen sadism.

Of course, this is an argument which could quite easily be used to justify a number of Miike’s more intense and graphic efforts, such as Visitor Q or Dead or Alive, though here perhaps even more so, as Ichi is a film into which the director has quite clearly projected a sense of his own ego and thematic obsessions. Although this fact is unlikely to win over those viewers unable to see past the violence (which in itself is forgivable, as there is an astounding amount of unpleasantness on display), it does provide a fascinating assault on the senses which begs further analysis not only of its aims and content, but of the viewer’s own understanding of what constitutes ‘entertainment’.

The plot, such as it is, is relatively simple, and more than anything else is a character study of two exceptionally psychotic individuals and the twisted worlds they inhabit. The story begins as a Yakuza boss named Anjo mysteriously disappears, along with 100 million yen, spurring super-masochist henchman Kakihara (the always excellent Tadanobu Asano) into a desperate search for the man who was not only his gangland superior, but his beloved partner in pain, and the only one who had been able to beat and torture him into a sense of fulfilment. Kakihara rapidly makes enemies of the other Yakuza, unsurprisingly as his interrogation methods generally involve kidnapping them and subjecting them to horrific acts of sadism. The truth behind Anjo’s disappearance is that he fell victim to Ichi (Nao Omori), an incredibly disturbed young man who has been dressing in super hero garb and slashing his way through the Yakuza ranks. Ichi is himself acting under hypnosis, controlled by Jijii (cult director Shinya Tsukamoto), a sinister mastermind who has an agenda of his own, leading him inexorably rewards a showdown with Kakihara.

It would be remiss to review Ichi the Killer without a frank discussion of its content, which is in many ways the film’s defining characteristic. Simply put, the film is insanely brutal, and contains truly shocking scenes of horribly inventive torture. The very fabric of the film is soaked with blood, and it is rare for more than a few moments to pass without some unfortunate cast member meeting an unpleasant end. The catalogue of atrocities also includes a number of rapes scenes and acts of sexual violence, and almost every frame exudes perversion and psychosis. Whilst these comments may serve as a recommendation to some, be warned: Ichi the Killer is a visceral, at times nauseating experience, and one which is not to be taken lightly.

Having said all of this, it is worth noting that the film’s brutality often works through playing upon the viewer’s expectations, and actually showing less than first appears. For example, in the latter stages of the film, during a particularly excruciating moment, a woman is stripped, and has her nipples sliced off. However, on closer examination, Miike never actually shows the razor blade make contact with her skin, instead relying on the terrifying screech of the blade against the metal table to almost physically induce revulsion in the viewer. This is a trick he has employed in a number of his other films, though rarely as effectively as he does here.

This in itself is indicative of the film’s heart, in that it deals with the way that the viewer is explicitly involved with the on screen carnage. Although provoking viewers into re-examining their own sensibilities and implications with cinematic violence is obviously nothing new, Miike here takes the theory to a punishing extreme, throwing in an at times bewildering mixture of humour and sadism. Through this, the viewer is challenged to constantly re-assess their attitudes, which may run through laughter all the way to revulsion, complete with feelings of guilt and outrage. This is done in a skilful manner that belies the film’s apparently thick-headed approach, as Miike never passes any kind of moral judgement or explicitly tells the viewer what they should feel, or which character they should be identifying with. In this way, the film can perhaps be seen as a moral void, which exists solely for the purpose of forcing viewers into this uncomfortable position.

Miike furthers this, and indeed adds a personal stake through the character of Jijii, the puppet master who controls both Ichi and the events of the film. Although his actual motivations are somewhat sketchy, Jijii clearly acts as the director’s alter ego, causing mayhem in the manner of an almost god-like figure who wields an omnipotent power over the rest of the cast. During one bizarre scene, this takes on a physical aspect, when the weak-looking man strips off his coat to reveal the heavily muscled body of a wrestler. It is of course interesting to note that Jijii is played by one of Miike’s colleagues, Tetsuo director Shinya Tsukamoto, a fact which makes the role all the more symbolic.

As well as being violent and unpleasant, Ichi the Killer is a deeply nihilistic, cynical film. Whereas most Japanese films concerned with Yakuza extol the values of loyalty and brotherhood, Miike here shows them as a shallow, selfish lot who are solely driven by their own desires. The only loyalty on display here is as a direct result of fear, or as a means for personal gain. This theme is crystallised in the character of Kakihara, who quite clearly does not care for anyone apart from himself, and for whom almost every act he commits is motivated by his own desires, often in a fashion that borders on being masturbatory. There are no positive characters in the film whatsoever, a fact which further defines the film as an antagonistic, visceral assault.

This is not to suggest that the film is underwritten, as it does have a very strong sense of characterisation that is generally lacking in extreme cinema. The characters of Ichi and Kakihara are well written, and the film spends a great deal of time exploring their psychoses, and though perhaps not offering concrete explanations for their behaviour, or indeed portraying them as realistic human beings, it at least presents them as fascinating, complex individuals. Similarly, the relationships in the film are surprising intricate, if not as a result of the plotting, which is at best melodramatic, then through their interactions. Although these are generally driven by self-interest, a number of them are actually quite touching, such as that between Ichi and one of Kakihara’s goons.

Thematic concerns and violent content aside, Ichi the Killer is a very well directed film, and one which arguably represents Miike’s unique style at its best. Here, he uses a wide variety of camera tricks and keeps everything moving at in incredibly kinetic pace, with the result that the film as a whole comes across as being highly energetic. This dynamism, coupled with Miike’s provocative approach to the material, makes watching the film an invigorating experience where the viewer barely has time to catch their breath.

Though it may disappoint some, the conclusion does not take away from what is an undeniably exhilarating experience, and Ichi the Killer retains its power to shock, entertain and baffle. Although the extreme violence and sadism may prove to be too much for some viewers, and may serve to drown the film’s underlying purpose in a sea of blood and viscera, it remains a key work in recent Japanese extreme cinema, and in the career of Takashi Miike.