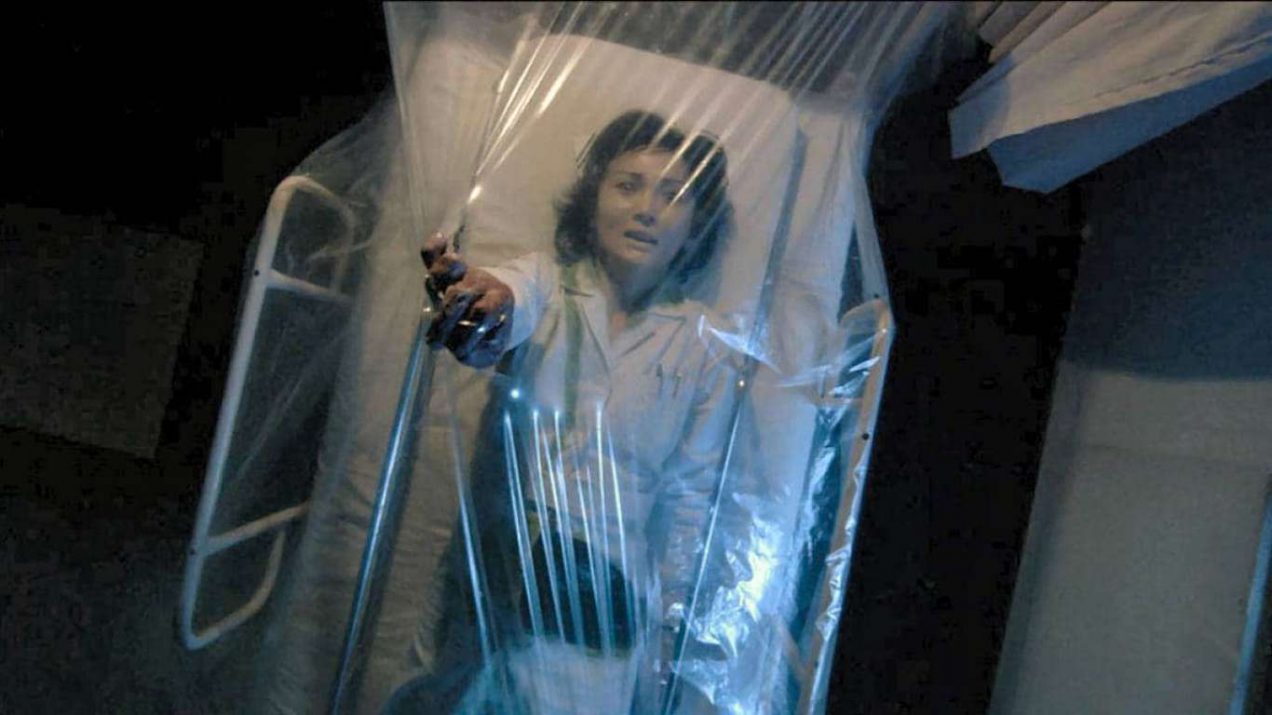 In a rundown hospital in Japan there are some weird goings-on. The management has gone missing, seemingly taking the wages with them, leaving disgruntled and disillusioned staff to trundle along with depleted drug stocks and little concern fro their remaining patients.

When a fatal mistake by one of the nurses causes the death of a patient, those involved decide to cover up their blunder rather than leave themselves open to a malpractice suit. Almost immediately a patient arrives suffering from the strangest symptoms, an infection that seems to be causing his internal organs to turn green mush.

While some of the doctors try to get to the bottom of the mystery, the body goes missing. Soon the staff involved in the cover up begin suffering from the same symptoms – but can they find the source of the virus in time?

Released in the US as the first film in the J-Horror Theatre, Infection is perhaps a better indication the series’ intentions than the highly derivative Premonition. It’s low-budget Asian horror all right, but more parts exploitation than it is cerebral, bringing to mind the schlock horror of the 80’s, such as The Re-animator and Basket Case.

Director Masayuki Ochiai (Hypnosis) is genuinely adept at creating a chilling atmosphere, but beyond cheap thrills and plenty of green ooze the story here doesn’t warrant it. A confusing, even by Asian standards, and frankly rather contradictory conclusion seem a fudged attempt to add that all-important ‘big reveal’. (Unfortunately the logic doesn’t stand from whichever way you look at it!)

If Ochiai intended this eerily set hospital to be reminiscent of Kingdom Hospital, either Lars von Trier’s original or the US remake, then he is only part successful. Sadly the setting and obvious budget constraints (the hospital pictured form the outside is some ten times the size of what we see), also bring to mind something else: the hilarious UK spoof series Garth Marenghi’s Dark Places – The Office’s IT nerd Matthew Holness led this big haired, power ballad, very silly take on 80s TV horror.

The real horror here is the neglected, grimy state of the hospital before the more grisly going on. As a satire on the state of Japan health system, the film misses a chance to be quite effective – this is not somewhere you’d be keen on ending up even however ill you were!

This is goody, pulpy fun, but if you’re expecting something as lasting as the original Ring or Dark Water movies then you’d better look elsewhere…

I can’t comment on the DVD itself, as I have only seen a time-coded review copy, but Tartan have previously had a very high standard of transfers of films.

As with many of there other releases, Tartan have left this a little light on extras.