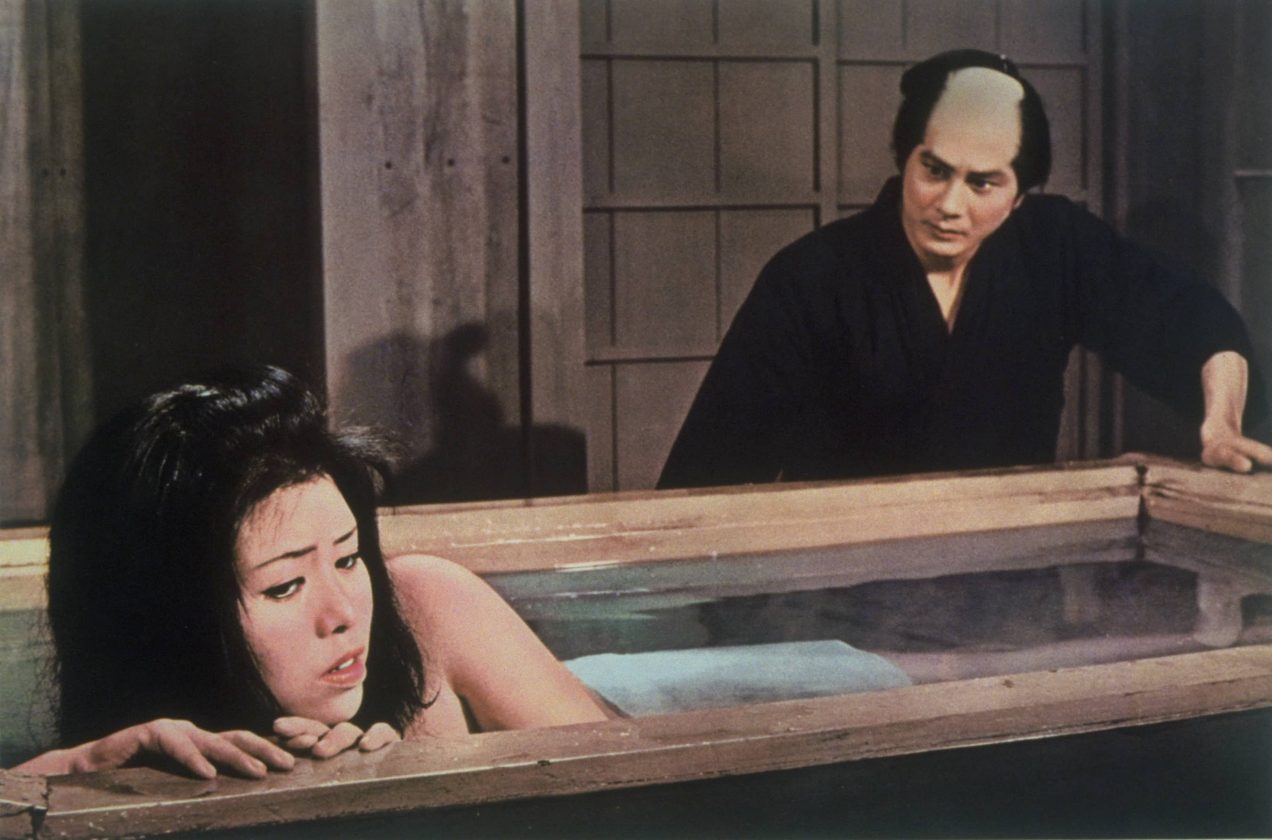 Teruo Ishii is a name synonymous with Japanese exploitation cinema. While during his extremely prolific career, encompassing a jaw-dropping 94 films, he dabbled in numerous differed genres, including science-fiction, film noir and martial art, exploitation is still undoubtedly the genre he is the most known for amongst film fans. In the centre of this is Ishii’s fantastically sleazy Joys of Torture-series, also known as his ero-guro series. Consisting of eight films (all made in within a span of two years) the series consists of erotically charged period gore, the emphasis of torture and erotica varying from film to film. Despite its dramatic title, Ishii’s fifth instalment in the series, Inferno of Torture, focuses more on nudity than gore, but nevertheless offers a few surprisingly savage moments, alongside an ample amount of boobs, bums and general sexploitation titillation, making for a very entertaining hour and a half.

Taking its cue from the final segment of Ishii’s earlier guro piece Joys of Torture, the story revolves around two tattoo artists Horihide (Teruo Yoshida) and Horitatsu (Asao Koike). Both men are in love with the same woman, Osuzu (Masumi Tachibana), whose hand in marriage has been promised as the main prize in a tattooing competition run by the local shogun. Besides this, the winner will also get the glory of being the best artist in town; an accolade both men covet almost as much as they do the virginal Osuzu.

While the competition between the two artists may be the main gist of the story, in true Ishii style, the plot meanders around like the labyrinthine corridors of the local bordellos and the main story arc is regularly forgotten in order to explore the exploits of the owners of said bordellos, or indeed the unfortunate souls that work within them. Besides a side plot involving a ginger Bruce Forsyth (Yusuf Hoffman) lusting after tattooed ladies, the story of Yumi (Yumiko Katayama) whose pristine beauty brings her more attention that she might like, and a side tale of a prison break orchestrated by one of the brothel owners, the rest of the plot is interspersed by various torture scenarios, that more often than not bear no real connection to the main story. Of course, they do not really need to either; when you choose to enter the world of Teruo Ishii’s torture series, you should fully expect to see some completely pointless, purely exploitative torture porn.

Compared to some of Ishii’s other works, such as Shogun’s Sadism (Yuji Makiguchi, 1976), Inferno of Torture is a relatively tame affair. Yes, it begins and ends with scenes that even by today’s standards are quite shocking in their brutality and to find anything comparable is a hard task to say the least, but besides those two gems of gore, the main focus of this torturous inferno is flogging, some light shibari and other types of bondage, with surprisingly little bloodshed. It does not ruin the film by any means, but those who are looking for something gorier, need to look elsewhere.

Like many of Ishii’s escapades in exploitation Inferno of Torture stands out from a lot of the smut of the period with its high production values. The story may be a paper-thin, but the sets are well crafted and cinematography and lighting beautifully designed, giving the whole film a very stylish quality. There are delightfully framed shots filmed through gorgeous stained-glass windows, as well as fantastically pervy sequences displaying lovely young ladies through a see-through glass floor; both equally fitting for the film’s overall ambience. Tattoos are naturally also at the centre of the story and a large part of the film’s running time is dedicated in showcasing these works of art (some real, some obviously painted). Most of the time this works purely as a vehicle for nudity, but I would be remiss if I did not mention some of the gorgeous artistry that has gone into this film. The winning piece of the tattoo competition, referencing the famous Ukiyo-e painting Takiyasha the Witch and the Skeleton Spectre by Utagawa Kuniyoshi is something sure to give most people serious tattoo envy and the glow-in-the-dark rave paintings depicted in the films climactic conclusion, are certainly a sight sure to stick in one’s mind.

Inferno of Torture may not be the goriest entry in Ishii’s torture series, but it is nevertheless a damn fine example of his work.  It is sleazy, yet beautifully put together and sure to please the fans of the darker side of erotica.