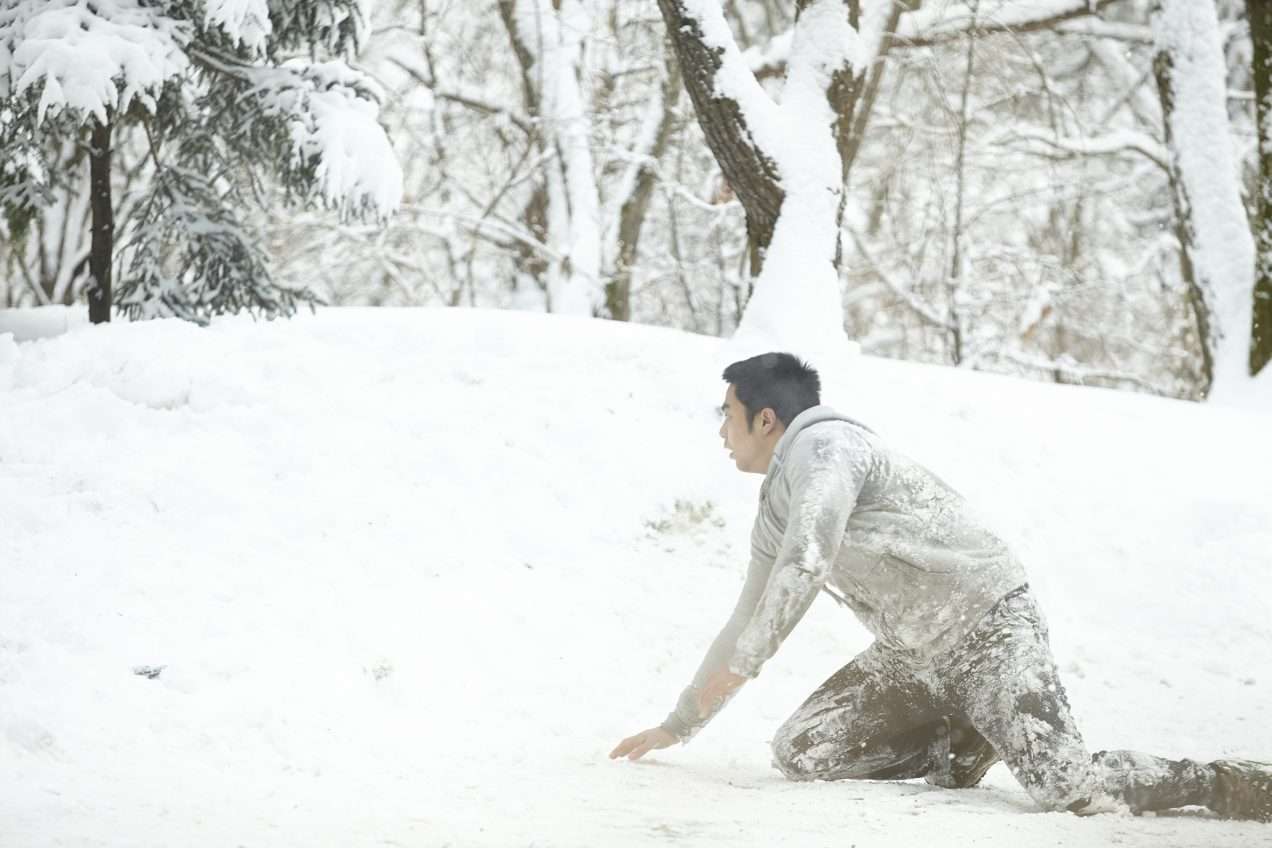 Korean mystery thriller Intruders, originally released back in 2013, marked the return of indie writer director Noh Young-seok, following up on his fantastic 2009 debut Daytime Drinking. It’s somewhat of a different offering, at least on paper, following a writer running into trouble with the locals while staying in an isolated snowbound cabin – a desperately familiar sounding horror suspense premise, which Noh manages to turn into something different and far more interesting. Sadly, the film is his last to date, despite the fact that Noh proved himself a hit on the international festival circuit, with Intruders premiering at Toronto in 2013, before screening at the likes of Busan, Hawaii and Rotterdam.

The film begins with a screenwriter called Sang-jin (Jeon Suk-ho, later in Kingdom season 2) arriving in the remote Gangwon province near the border with North Korea, aiming for a month of quiet solitude to finish his latest script while staying at a cabin owned by his producer. His plan is ruined right from the start, Sang-jin attracting the attention of an oddball, recently released ex-con called Hak-su (Oh Tae-kyung, R-Point) on the bus, who decides to tag along with him, refusing to take any of his hints that he’d rather be alone. Though he eventually makes it to the cabin, his writing is continually interrupted by various strangers, including threatening poachers and a pushy group of young skiers. Things take a turn for the deadly when he finds a body outside his cabin, and the poor fellow is soon caught up in chaotic and murderous events.

This is really just the initial basics of the plot, and Intruders is definitely the kind of film viewers are best going into knowing as little as possible, half the fun and tension coming from trying to guess where Noh Young-seok is heading next. It’s certainly not the standard home invasion thriller suggested by the premise and its rather generic title, and Noh works in a number of sharp reversals and twists along the way, making it unpredictable and frequently surprising viewing. Like Daytime Drinking, it’s a comedy of errors of sorts, revolving around reserved protagonist Sang-jin finding himself in increasingly awkward situations and further and further out of his comfort zone – Noh shows a fairly cruel sense of humour throughout, and the film is very funny in a bleak, mean-spirited way, poking fun at the ways in which people get distracted by petty concerns and problems, and fail to see what’s going on under their noses as a result.

The characters are an unconventional bunch, Sang-jin included, all flawed, at times unpleasant individuals, and though this does make it hard to feel emotionally involved with their fates, the intelligent script does a great job of keeping the viewer hooked and off-balance. Hak-su is arguably a more interesting figure, and Noh gets a lot of mileage out of his unstable behaviour, effectively putting him at the heart of the film’s central mystery. It’s an expertly constructed puzzle of a film, highlighted by its bold final twist, which will likely mean a great deal more to Korean audiences, though those who keep their eyes and ears fully open throughout might see it coming.

One of the main reasons behind the film’s success is Noh’s matter of fact directorial style, which sees him keeping things grounded and deadpan, giving the proceedings an almost minimalist feel that fits well with his themes. Though the film is violent, the brutality and blood is very much downplayed, and is largely left off-camera rather than given centre stage as is usually the case, and this helps further the sense of the characters being caught up in events they don’t understand and can’t control. Noh similarly makes great use of the snowy scenery to generate an atmosphere of unsettling isolation, even managing to work in an amusing meta-reference to Misery along the way.

Intruders is a great sophomore effort from Noh Young-seok and a worthy follow up to Daytime Drinking, again marking him as an impressive writer and director – it’s really a shame that he doesn’t seem to have stepped back behind the camera since Though the effectiveness of the final twist might vary for different viewers, it’s a fantastic suspenser, and one of the few genre films of late to actually boast some genuine shocks and surprises.