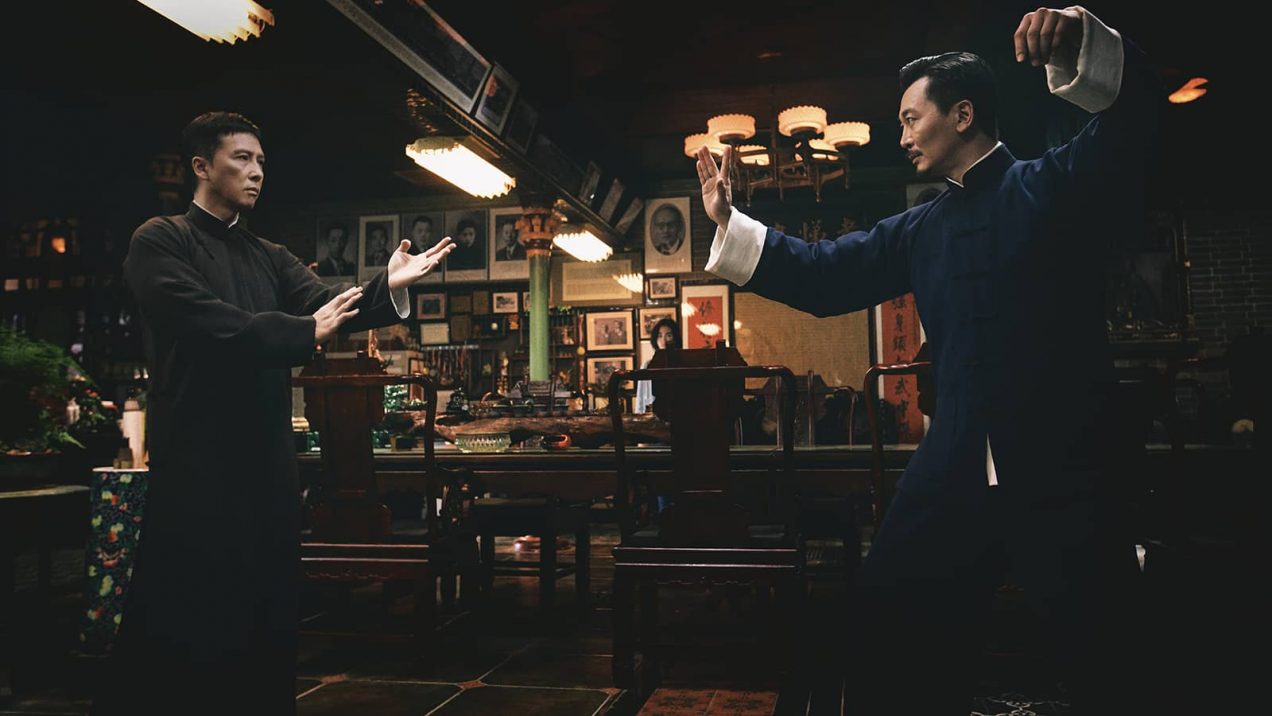 Just over a decade after the 2008 original smacked its way onto screens around the world, the Ip Man series comes to an apparent end with Ip Man 4: The Finale, with Donnie Yen returning as the martial arts master and the teacher of Bruce Lee. Having fought in China against domestic rivals, the Japanese, various villainous westerners and Mike Tyson, the film sees Ip Man travelling to the US to deal with more of the same, and has been highly anticipated by genre fans, not least since Yen announced that it would be his final kung fu outing.

The film kicks off with Ip Man now in his 70s, having recently been diagnosed with cancer. Hearing that his student Bruce Lee (Danny Chan, who also played Lee in the television series The Legend of Bruce Lee) has run into trouble over in San Francisco for teaching foreigners Wing Chun, he heads over to the US to investigate, as well as to try and find a school for his wayward son. While there he finds the local Chinese community under threat from local racists, not least a hateful US army officer (Scott Adkins, Triple Threat) who will stop at nothing to degrade his Chinese colleagues, and who is obsessively determined to prove that karate is superior to kung fu, despite his constantly stated despising of all things Asian.

Since the original, the Ip Man films have been flag bearers of a sort for modern Chinese martial arts cinema, holding their own against more contemporary and hard-hitting Asian action films like The Raid and others. Unfortunately, much like the career of star Donnie Yen, the growing popularity of the series hasn’t been matched by an increase in quality, with Ip Man 3 in 2015 representing a marked step down for the franchise. Depressingly, Ip Man 4 continues this downward trend, distilling all the weaker points of its predecessors into a clumsy, at times embarrassing brew, consisting mainly of unconvincing western actors hurling old-fashioned racist and often bizarre insults at the Chinese cast, who invariably reply with stoic nationalism and jingoistic patriotic slogans. While the idea of Ip Man himself as a symbol of the Chinese identity and strength has been key to the series, here it’s taken to ridiculous, pantomime extremes, enough so to push the film into surreal comedy and ham-fisted lampoonery.

The plot, such as it is, barely registers, and while previous instalments at least had a fair amount of action, here there are long, tediously redundant sequences where nothing of any importance happens, the film focusing on Ip Man’s efforts to get a letter of recommendation for his son to attend school in the US or a lame melodramatic subplot about high school bullying. At some point after the halfway mark, director Wilson Yip seems to suddenly remember that the target audience will be expecting an Ip Man vs evil foreigner showdown, though there’s almost no discernible effort made to generate any tension or to make the final fight a rousing showstopper. The film is dull and slow-moving as a result, and the lack of any character development or convincing historical detail mean that it works neither as an action film nor as a serious biopic.

Matters are not helped by some truly shoddy production design, the film lurching between obvious sets and ill-chosen exteriors, with northern England doubling for San Francisco without much in the way of set dressing – UK viewers at least should get some amusement from seeing Ip Man cutting about Preston and the Wirral, and getting into a fight with bullying kids in what’s clearly not a school in the US. This lack of attention to detail pervades the whole film, with the being glaring continuity errors scattered throughout and an editing style which could politely be described as jarring. It’s hard to remember a Chinese film with such a high budget that looks so cheap, and this gives the proceedings the air of the kind of direct to DVD special that would have been left at the bottom of the pile even in the 1990s.

Although these criticisms might not sound particularly serious for a fight flick, sadly the action choreography is average at best, with Yuen Woo-ping phoning things in and with the fight scenes lacking conviction or impact when they do arrive – there’s nothing innovative or exciting here, and the film pales in comparison to others in the series. Even the usually reliable Donnie Yen can’t rescue the film, not least since he’s supposed to be playing a 70-year-old man (as evidenced by the two tiny flecks of grey in his hair), and the less said about the performances of Scott Adkins, Chris Collins and the other villains, the better – come back, Mike Tyson, all is forgiven.

To be fair, this isn’t really their fault, as the script doesn’t give any of them much to do apart from scream about ‘yellow monkeys’, ‘white devils’ or ‘hanky panky kung fu’ (the latter presumably an insult rather than referring to some kind of boudoir antics), and the cast do at least make an effort to look angry and macho, or in the case or Yen, aloof and bored. For viewers in the right mood, or perhaps after the judicious consumption of alcohol, this does make the film quite funny, and every scene involving Vanda Lee as the bullied school girl verges on the camp, whether she’s running at Yen like a puppy dog screaming ‘Uncle Ip!’ or lecturing her supposedly American classmates about them being illegal immigrants and the land belonging to native Indians, calling them ‘pale faces’.

All of this is a real shame, and it’s sad to see the Ip Man series go out with such bumbling incompetence. Seeming to have no idea how to combine its nationalistic sentiments with entertaining action, Wilson Yip fails to even tick the standard genre boxes, and the final flashback scenes to the previous franchise entries, including classic sequences of Donnie Yen duelling with Sammo Hung, only serve to underline how much of an embarrassment the film is, and it has to be hoped that it is indeed the final fight.

Ip Man 4 – The Finale is released in US and UK cinemas from 25 December by Well Go USA. It will be released in China, Hong Kong, Australia and New Zealand from 20 December.