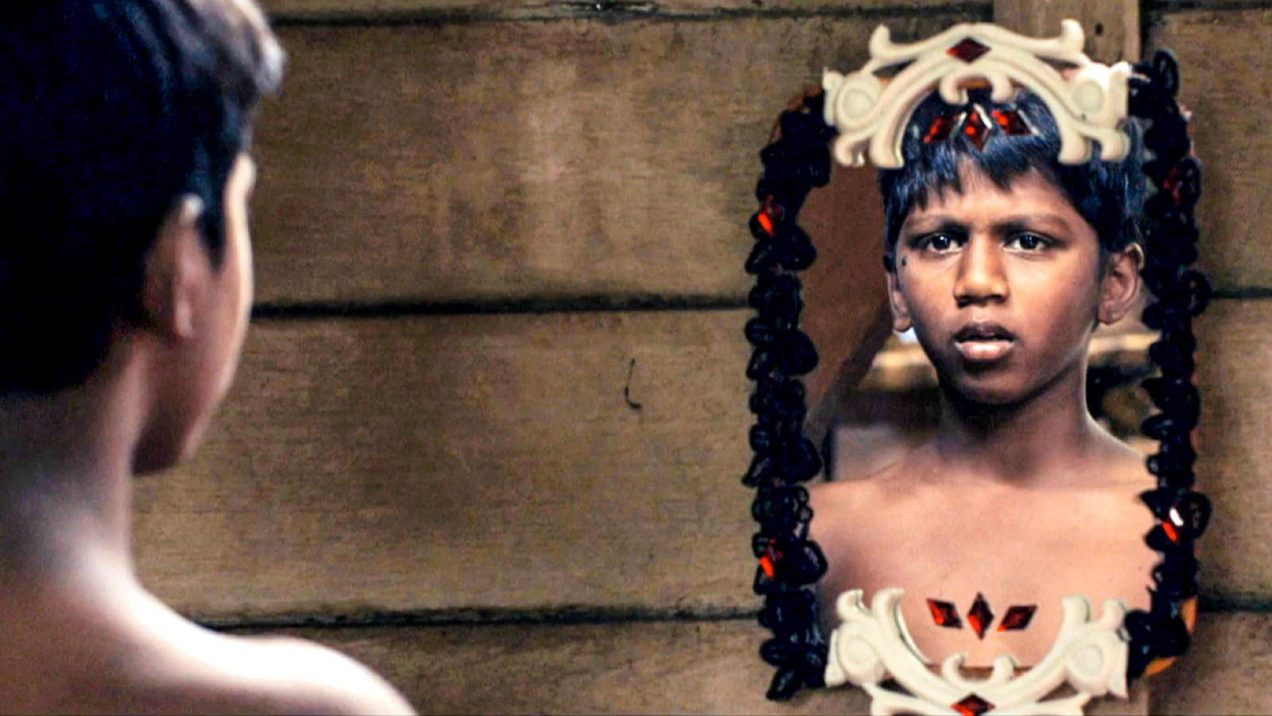 The main characters in Jagat are Appoy (Harvind Raj) and his father Maniam (Kuben Mahadevan) who live in a deprived area in Malaysia. Appoy is a mischievous schoolboy who neglects his homework and spends most of his time leisurely. Although he is interested in learning different things and doing what he loves, he has a habit of thinking outside the box and not following his parents and teacher’s path of ambitions. For example when his class are given the task of dressing up as famous people throughout history, unlike other students who choose famous scientists or doctors, Appoi chooses Michael Jackson. This brings us to his father Maniam who is a strict and hard-working man. Holding a manual labour job Maniam is a standard working class man who is desperate for his son to excel in school and make something of his life. The only issue is he exerts his authority through a lot of whacks across the head and ear pulling, by choosing violence to discipline his son Appoy he slowly starts to push him away. On the other side there is a gang war going on in the area involving Maniam’s brother Dorai (Jibrail Rajhula), also known as Mexico, who seems reluctant about his chosen lifestyle and slowly tries to break away from it.

What could have been be a revealing coming of age story is sadly hampered by an unnecessary criminal storyline and subpar acting.

The highlight of the movie is Appoy, Harvind Raj is a phenomenal actor at just 12 years old and gives a believable performance of a child finding his way in the world. When Raj cries, gets angry or curious, you know it is real. Director Shanjhey Kumar Perumal also manages to find little ways to highlights Appoy’s innocence and rebelliousness, for instance there is a scene where Appoy wants to watch television despite his father forcing him to do his homework. Appoy turns away from the television and then lifts his metal pencil case lid to reflect the television screen so he can secretly watch it. It is tiny moments of comedy like this that help lift the curtain on the playful life of a child and draw you to Appoy. The actors who portray Appoy’s father and mother, Kuben Mahadevan and Aahmuu Thirunyanam, also turn in brilliant performances. Mahadevan expertly plays the brooding father and does so with little dialogue, a lot of his emotions come through his facial expressions and actions (which involve his abuse of Appoy).

The movie is also well shot and gives us a rich view of the deprived areas of Indian Malaysians. We see the bare country roads and slum like homes of the inhabitants; it’s a slice of history that the director wanted to bring to the world. The film’s purpose was to follow the difficulties Indian Malaysians faced during the post estate era in the 1990s. This is when estate owners no longer employed Indian Malaysians as they had been for generations, and were forced to move into the city and find menial work. This is highlighted well in the film seeing the poor standard of living and even a scene where Maniam tells the audience directly that they used to live fairly privileged lives before they lost the estates. We then see why Maniam is so harsh on his son gaining his education, as he wants him to escape their hopeless circumstances. Ultimately Maniam and Appoy are the best thing about the film. We see two generations in conflict over the meaning of success and Appoy’s journey into becoming either a good man or a criminal.

A final saving grace of the film is the soundtrack composed by Kamal Sabran (Space Gambus Experiment). It’s a mix of Eastern style instruments with acoustic riffs that makes for a wonderful East meets West score. It’s a rough, sharp and catchy soundtrack that is incredibly impressive and perfectly sets the mood for the film’s serious drama. If I were only rating the soundtrack it would get an easy 10/10.

We then come to the downside of the movie, the gangster storyline. There is gang warfare rampant in the area that is the director’s way of illuminating the criminal path people take when living in economically harsh conditions. This issue is explored through Dorai who is seen as the other influence in Appoy’s life, where Appoy turns to him for guidance and even indulges a little in his criminal lifestyle. Whilst Dorai is seen as a sympathetic man who is torn between a normal life or a life of crime, the rest of the gangster shenanigans are not interesting at all. You never really know why the gangsters do what they do or what their motivations are. It is not helped by incredibly weak dialogue and poor acting, unless the characters actually explained their motivations there is no real point to them. Maniam and Appoy’s relationship is the only time you pay attention because of the emotional depth, but the pointless violence and escapades of the gangsters makes you drift off.

The film would have succeeded had the director focussed solely on Appoy’s coming of age journey and the relationship with his father. Unfortunately half the film is plagued with the unnecessary and confusing gang plot, it almost seems like two different movies that were merged clumsily together. The acting overall is weak on part of many side characters and the dialogue can be incredibly wooden. It is no surprise that many of the actors were first time actors. There are times scenes cut away too quickly and don’t flow well into the next scene; a song may have been playing in one only to end abruptly before the cut. Another major flaw is the lack of dialogue; overall it is a quiet movie where you see the storyline through the actions and scenery rather than words. Although it succeeds in ‘show don’t tell’, Jagat goes a step too far where the extreme lack of dialogue leaves the audience clueless, no one knows why anyone does anything or more details on the economic conditions of the period. It would have helped to educate the audience further on the movie’s message if the characters actually talked about it!