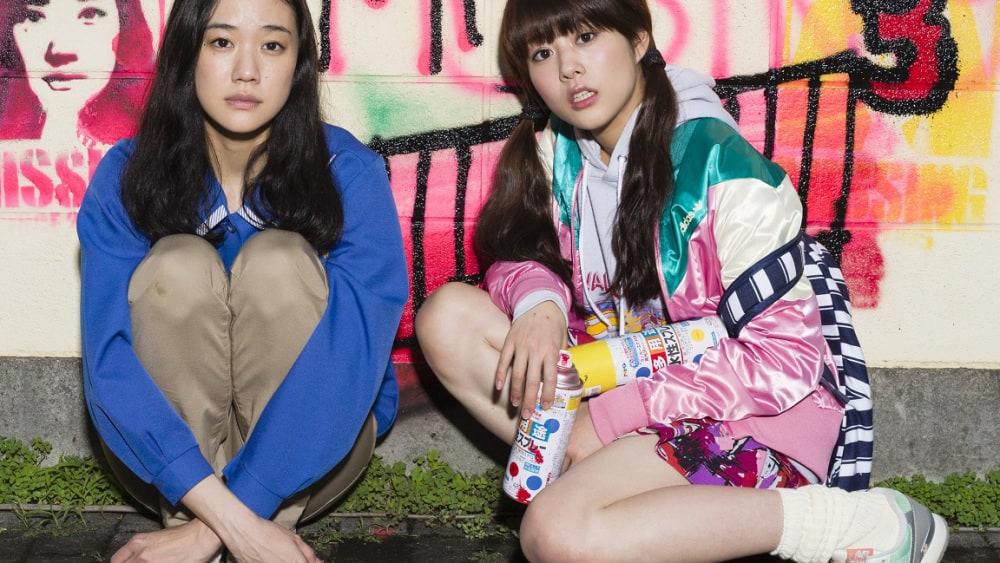 Hands up for gender equality…

Haruko Azumi is missing; gone from her hometown in a matter of seconds, her disappearance a mystery that’s yet to be solved. Presented in three timelines, Japanese Girls Never Die examines the futile situation that Haruko and women across Japan face in the eyes of a restrictive, patriarchal society. Where marriage and children are expected, and any dream of breaking the glass ceiling is crushed because of one’s gender. Presented almost like a dreamscape, where reality and imagination collide, this disjointed, rollercoaster ride of a film presents an intense critique on Japanese society.

Prior to her disappearance, Haruko was stuck in a dead-end job working for men who earn 10 times her salary, lives at home, where three generations stay under one roof, and has just entered a doomed on-off relationship with her deadbeat classmate Soga. Wherever she goes Haruko is reminded of her low status as a woman, whether it’s her sexist bosses telling her to ‘wear a skirt’ or how she’s forced to beg Soga to stay with her even after his interest has turned to a married woman. Her life is less than ideal, to put it mildly.

Based on a book by Mariko Yamauchi, the film is focused not only on Haruko, but also 20-year-old Aina, and a gang of high school girls who run around town looking for men to beat up. Aina is in a similar situation to Haruko, a nail artist by trade and desperate to find love she hangs around her lover Yukio and their former school friend Manabu who are trying to become the next big trend by graffitiing a stencil of Haruko’s missing poster all over town. She’s stamped as desperate because she texts too often, and Yukio even tells Manabu he can sleep with her because she’s ‘easy and will put out’.

The experiences of these two are the basis for much of director Daigo Matsui’s scathing criticism of life in Japan, which is still predominately ruled by traditional values. Raising a finger to this view, Matsui focuses instead on how these women can take their lives into their own hands, and do whatever they want to make it better – something which is most obvious with the film’s self-empowered female gang. The story is led impeccably by Yu Aoi, who brings a nuanced and powerful performance in her role as Haruko. She is the driving force of the film, and is what keeps it afloat even as other factors weigh it down.

Despite all its appealing messages about empowering women, the film suffers from a lack of clarity because of the haphazard way that Daigo presents the narrative. Jumping from one story to the next, and presented out of order with little explanation or timeframes, it’s hard to keep on top of what’s going on onscreen. While his directing style is certainly something different, it feels like it does more harm than good. If it wasn’t for the film’s stellar central performance the story probably wouldn’t have worked half as well as it did.

The Dark Maidens screens as part of the Japan Foundation Touring Film Programme 2018, which takes place from February 2 to March 28.