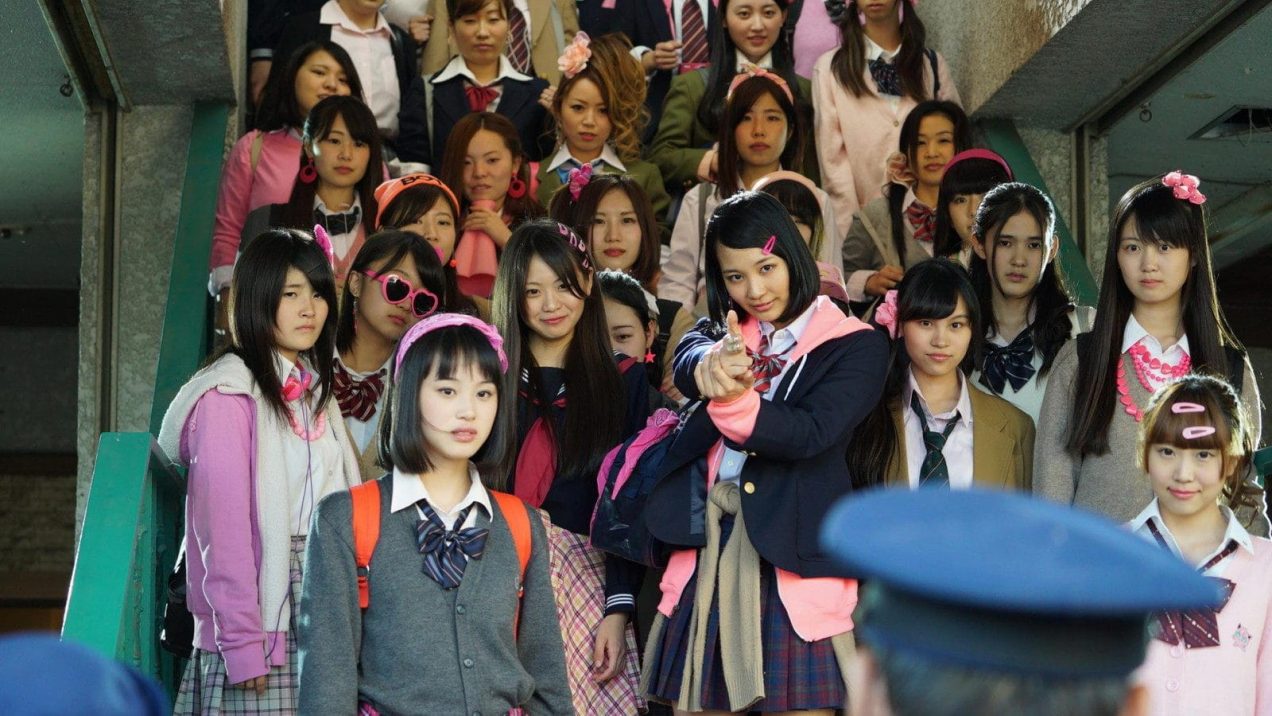 A Japanese woman goes missing, her face goes viral, men across the country are attacked by a gang of female teenagers…

From the quirky title I assumed this film would be either:

The real plot however is a little more complicated and socially relevant, based on the novel Azumi Haruko wa Yukuefumei by Mariko Yamauchi.

Azumi played by Yu Aoi (Journey to the Shore, Over the Fence) is a meek 26-year-old working woman who pursues unrequited love with her non-committing boyfriend Yuji played by Huwie Ishizaki. One day she suddenly goes missing, and her missing poster is painted all over Japan in pop-art style graffiti, making her a viral hit. While the mystery of her disappearance slowly unravels, a gang of teenage girls begin brutally attacking unsuspecting men across the country.

Japanese Girls Never Die is ultimately an odd yet fascinating commentary on sexism women experience in Japanese society. Various situations are peppered throughout the film; working women are mocked by male managers, sexually liberated women are slut shamed, we even see accusations of Japanese women harming the economy due to their non-traditional life choices.

At the core of it is our innocent and assuming protagonist Azumi played brilliantly by Aoi, who navigates the patriarchal world she lives in and learns about the choices women struggle with. She is contrasted by her foil Aina played by Mitsuki Takahata (Rage, Shodo Girls!! Watashitachi no koshien, Evergreen Love) a fun loving Harajuku-esque woman who freely enjoys sexual exploits. There is clear commentary for instance on women and sexuality with the contrast between Azumi and Aina, where Azumi exhibits the virgin complex (despite having sex with her boyfriend for love) and Aina exhibiting the whore complex. Azumi is criticised for her masculine dress sense at work by her crudely sexist bosses Shacho played by Tomiyuki Kunihiro and Jiro Tsugawa played by Yurei Yanagi. They constantly ask her if she is dating someone and advise her to dress more femininely at work to impress male visitors. Aina meanwhile is consensually used by her boyfriend and his male friend for sex and subsequently slut shamed for her flamboyant behaviour. Both women are punished for their life choices dictated by the male characters.

This may be reflective of the state of Japan which still has hurdles to overcome regarding sexism. Working women for example still experience maternal harassment (pressuring pregnant women to quit or leave their jobs) and as of 2016, 60 per cent of women quit the workforce following pressure to do so. On the topic of marriage, a Japanese woman unmarried by the age of 25 was referred to as “Christmas Cake” meaning they were past their marriageable age, much like a Christmas cake after December 25th. Now they are referred to as New Year’s Noodles meaning their sell by age is 31, as the noodles must be eaten by December 31st. So the higher age bracket is doing them a favour…?

These topics takes up the majority of the film, and despite the title, the female teenage gang attacking men only make brief appearances. You ultimately wonder what their purpose is; are they exacting revenge on male society? Do they wish to avenge Azumi? Could they be a critique on Western stereotypes of Japanese teenage girls through their schoolgirl outfits, constant giggling as well as subjective homage to Gogo from Kill Bill? We never really know.

Although the film will grab your attention with its gender role commentary, it does have its faults. There are constant time jumps since the story is not told in chronological order, this makes for confusing viewing. The actions involving the gang attacks are gripping but hampered by too much shaky camera work. It would also have been nice to see more of the gang and their motivation behind their male centred attack on society. Had the film have more chronological order and less unanswered questions it would have been perfect, but maybe that’s what the director was aiming for. Maybe we have to find the answers.

Much like the graffiti of Azumi’s missing poster, is she a symbol of female empowerment due to the poster’s popularity? Or a bleak reminder that despite Japan’s modernisation, women are still pushed back until they are nothing more than a silent illustration on a wall?

Japanese Girls Never Die screens as part of the New York Asian Film Festival 2017, which runs from 30 June to 16 July.