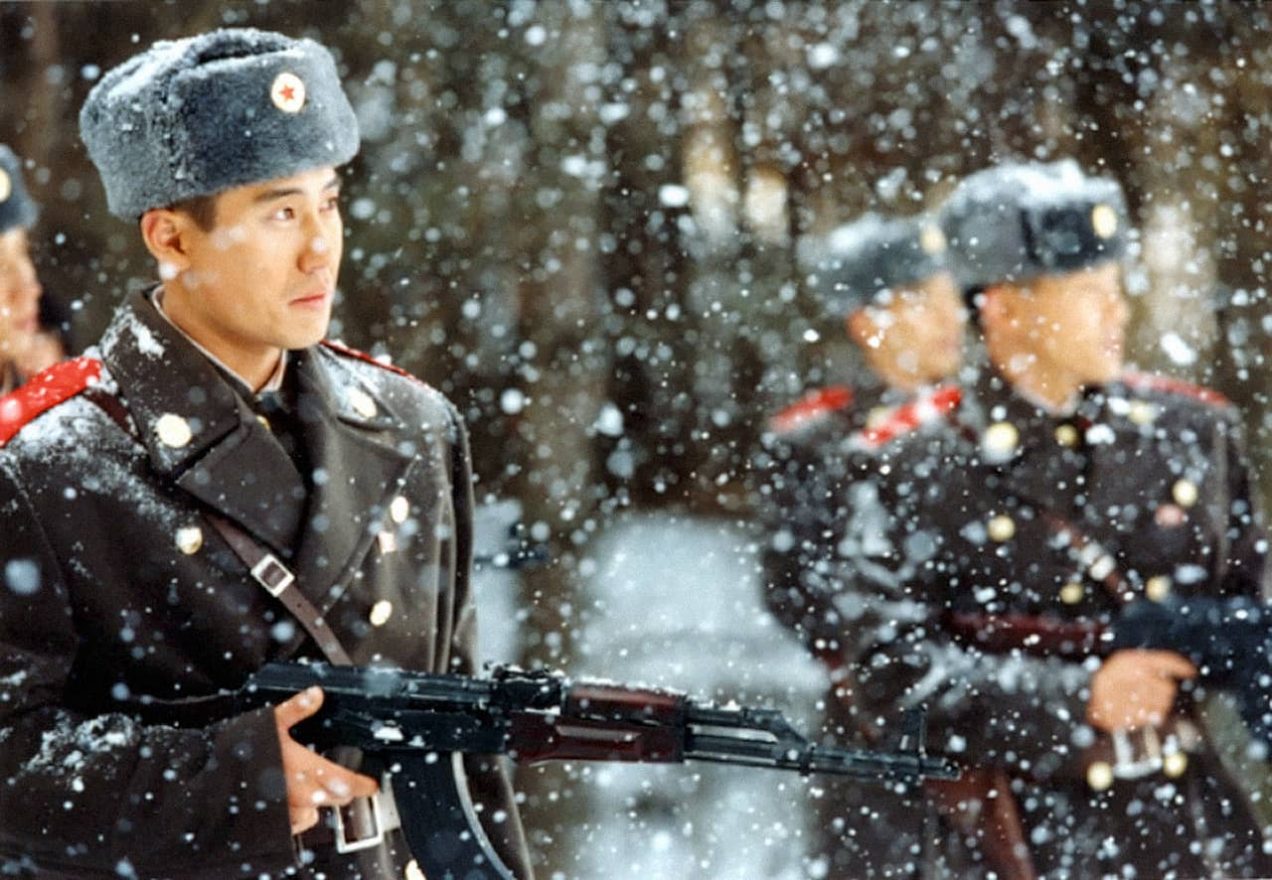 There’s nothing like the prospect of a trip to South Korea – and an (almost) inevitable trip out to the DMZ – to spur on a revisit to one of the most iconic films based in the notorious region between North and South Korea. Let’s just hope that nothing like these events happen while I’m there…

After a potentially inflammatory incident at a North Korean border house in the DMZ where two soldiers were killed, – including one who was shot eight times at point-blank range Jeong Woo-jin (Shin Ha-kyun, Sympathy for Mr. Vengeance, Save the Green Planet!, The Thieves, The Front Line) – and a South Korean soldier was caught fleeing back across to the Southern side, erupting in gunfire between the two sides, a special investigation is launched by the Neutral Nations Supervisory Commission, led by Swiss Army Major Sophie Jean (Lee Young-ae, Lady Vengeance, One Fine Spring Day, spotting a rather thick Korean accent on spoken English for a character brought up in Switzerland).

With both sides offering different accounts of what happened that night from South Korean Sergeant Lee Soo-hyeok (Lee Byung-hun, The Good, The Bad, The Weird, I Saw The Devil, Masquerade) and Sergeant Oh Kyung-pil (Song Kang-ho, The Foul King, Secret Reunion, Memories of Murder, Snowpiercer), Sophie begins to uncover the truth. All of which point towards another South Korea solider being at the post, Private Nam (Kim Tae-woo, Woman Is the Future of Man, The Coast Guard, The Face Reader) A growing, unlikely friendship between soldiers from both sides of the border, bit just what happened that fateful night?

Park Chan-wook had already directed two films when he came to helm Joint Security Area (often abbreviated to JSA) in 2000: The Moon Is… the Sun’s Dream (1992) and Trio (1997), but neither had done much for his career as director; instead making his living as a film critic. JSA would change that. Drastically. Park’s third film became incredibly success; he had seemed to capture the zeitgeist of a generation, as South Korea opening up to the world and looking for new hope in the relations with their immediate neighbours and once countrymen. It quickly became the most-watched film within South Korea, overtaking Kang Je-gyu’s Shiri (1999) as the then-highest grossing film at the Korean box office. (Though that record has been continuously beaten ever since.)

It’s easy to try and draw a line between them, and many did. Superficially both shared some of those same hopes and emotions. In Shiri’s case, it was two lovers who just happen to work for either side; it’s just one of them doesn’t know it. But ultimately in Joint Security Area there’s no blame thrown at North Korea; it’s not as if there’s a radical terrorist running around in the shape of Choi Min-sik. It’s the Cold War-fed nervousness of the South Korean soldiers, and their naivety, which fuels this potentially catastrophic situation. More interestingly their commonalities lie in tone and construction. Shiri may have been more of a straightforward action film, influenced by US and Hong Kong, whereas JSA presents itself as a sober whodunit, both more far more Western in their storytelling.

Here the central thrust of the narrative is the story told in flashback, as Jean uncovers the truth layer by layer. Perhaps it’s the setting, but the film always reminded me of me a little of the 1973 Jack Gold adaption of Algis Budrys cold war science fiction novel Who? (at least how I remembered it from having seen it a couple of decades ago, even then long relegated to late-night slots). There Elliot Gould is cast as an agent trying to get to the truth of the lead protagonists identity, and whether he is who he says he is, or a spy imposter. Like many stories told in this way, both films share the fact that it is the last revelations that are the most shocking. Like Park’s hero Hitchcock on Stage Fright, the flashbacks hinge on being told from the protagonist’s point of view, which we discover is full of half-truths and lies. The interesting thing about Joint Security Area is that when the last truth is imparted, it no longer matters – not as much as the senseless loss of another life over the guilt they feel.

In the beautiful countryside setting of the DMZ (recreated elsewhere, presumably, as was Panmunjom), we see the soldier’s meet on a moonlight night in large fields. It’s perhaps the most considered and elegant film from cinematographer Kim Seong-bok, who coincidently also worked on Shiri (and later Public Enemy, Silmido and Moss with Kang Woo-suk); which rather suggests just how much input Park had into the films look. The construction of the film is meticulous; from effective transitions, such as geometric building shapes dissolving into umbrellas seen from above; to distorted perceptions, such as the friend first seen falling up before you release they are in reality upside down. When one of the characters is caught in crossfire between both sides falls to the ground, the camera pulls back to watch the chaos from above in slow motion, as if the character is suffering an out-of-body experience. These are all visual elements that we’ve come to recognise from Park.

Outside of Jean’s investigations, which occasionally feel a little clunky with the English-speaking actors – although better than most Asian films – the friendships between the soldiers are brought to life with exemplary performances from the cast. Lee Byung-hun is empathetic as a lead, hitting the nail on the head in terms of a cocksure soldier whose his arrogance will be his downfall. Instead, Song Kang-ho who plays the most authoritative – playing against the irreverent type of role that he would later become synonymous with – his many years and experience over the others giving him the knowledge of how best to avoid the worst repercussions that will come.

Perhaps it’s reading the film from the perspective of a pacifist, but this isn’t a tale of daring heroism but of naivety in the repercussions of such an alliance. Like Lee Chang-dong’s earlier Peppermint Candy, a film also told in flashback, there’s a perceptible comment on the national conscription. This time it’s less about the long term effects, but more just how responsible such young men can be at points of such critical decision making and conduct. As the uncertainties loosen between them they play, but not as men so much as kids; the imagery is both cute and striking, questioning just how mature these men are. It’s no surprise to find the one group that were not impressed with Park’s film were the real ROK army, publicly stating it was a work of fantasy. According to Darcy Paquet’s 2004 review, twenty older members of the JSA Veterans’ Association even stormed into the office of the production company Myung Film, ‘breaking windows and physically threatening the employees of the company; demanding that the production company issue a public apology to the army and insert notices at the beginning and end of the movie stating that it is a work of fiction.’

As you might expect from such a meticulously fashioned film, Park leaves us with a poignant moment captured on a photograph that we saw taken earlier in the film, showing them all together in their various duties around the JSA. But as Lee Byung-hun’s character points out at the time, you know you’re not supposed to take pictures in the Joint Security Area? (Yes, I am taking notice…)

Joint Security Area is released on UK Blu-ray on 18 January 2021 by Arrow Video.

The original Korean DVD is what these editions are all about; from the slick, ‘peephole’ packaging the disc jam-packed full of extras, including two audio commentaries! Only thing is, like most (nearly all) Korean disc, none of the extras have English subtitles. The film itself is a good transfer, but has a few minor defects that you wouldn’t expect to see on a new release.