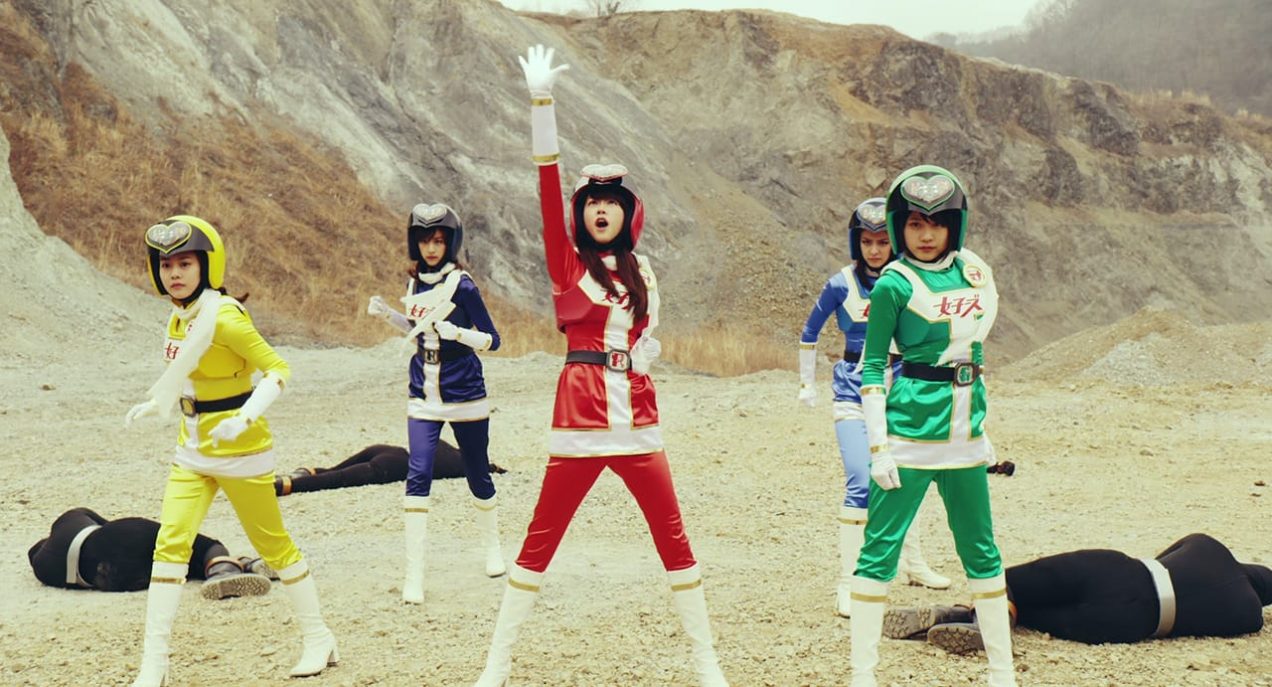 An all-female cast star as a team of heroes out to save the world from the forces of evil! No, this ain’t Ghostbusters!…

The tokusatsu genre has always been a favourite of mine, with the incredibly straightforward heroes, the extravagant costumes and villains, the incredibly ridiculous plots and even the repetition of said plots. For those who don’t know, tokusatsu is basically any live-action media that involves colourful special effects that are mostly aimed for children. As for Western audiences, there are adaptations of tokusatsu over in America like Godzilla and Power Rangers that are still popular today, with even a new Power Rangers film on the way. And with such a popular genre, there will be lots of spoofs and parodies about it and this is where we enter Jossy’s, a tokusatsu parody that knocks all the tropes and clichés of the genre, particularly ones involving Super Sentai. With an all-female cast and the lowest of budgets, will Jossy’s save the world and be a fun film or will it fail and sink into the clutches of evil?

The story starts off with five different young women (Kirei Miritani, Mitsuki Takahata, Mizuki Yamamoto, Mina Fujii and Kasumi Arimura) of different characteristics and personalities being assembled against their will by male leader Charles (Jiro Sato) who only appears as a hologram projection. Amusingly, they were only chosen due to their last names due to having colours in their surnames (Red, Yellow, Navy, Blue and Green respectively). Nevertheless, they take on the task to save the world from complete destruction, but it does have its caveats like the increasingly unfortunate timings of interfering with their daily lives and careers. And there are the little things like demanding salaries for their heroic deeds and the little difference in colour between Navy and Blue and the amusingly crappy name of Jossy’s, which makes just as little sense to the Japanese as well as the Western audience.

Jossy’s is directed by Yuichi Fukuda, who directed comedies like the Hentai Kamen films and Kids Police, so he definitely has a hand in amusing comedies and thankfully, Jossy’s continues that trend. The skewering of the tokusatsu genre is surprisingly accomplished. So much so that even the flaws of the film can be seen as absolute positives in the long run, like the repetition of jokes and the astoundingly low budget i.e. the quarry used to fight villains is used over and over again and the henchmen never change despite the different villains on display. While the repetition may irk some (as it is a major flaw in Fukuda’s other works), it actually builds up to a major plot point that adds to the humour. It especially works in the second half of the film, when the characters are aware of the repetition and how rote the superhero job actually is, which results in spectacularly off-kilter gags like a scene involving an acting rehearsal that could not be more deluded.

All the tropes and clichés are touched upon in an amusing fashion i.e. the heroes always fail individually but together they are unstoppable AND even the product placement inclusion in tokusatsu gets a big laugh in the form of Febreze that is used to defeat a villain. There’s even a slight social undercurrent of feminism in the film, especially how women deal with the workforce dominated by men who are either unskilled or lazy; in comparison to the women, who are clearly more determined and hard-working, despite some of them pining about how cute some actors are and their petty squabbles.

The actors are all game in their parts and fortunately, they all have their funny moments to add to the film. Mirei Kiritani plays the role of Red with such conviction that it comes off as hilarious i.e. when she says lines that are meant to be epiphanies for other characters, only to be brushed off instantaneously. Her lack of awareness to current pop-culture is also a good running gag that not only is funny, but is also a commentary about the lack of self-awareness of the genre itself i.e. like her lack of knowledge of the mega-popular 20th Century Boys manga and dissing pretty-boy actor Jang Keun-suk as a “ugly bastard”.

Mitsuki Takahata plays the role of Yellow in such an understated manner with aplomb that she makes throwaway lines more amusing than they actually are. It certainly helps that she supposedly has the most “tragic” character to play and it’s an amusing contrast to how the character is actually portrayed. In fact, she may have the best scene that involves staring at stairs for a LONG time. You just have to see it to believe it. Mina Fujii, who plays Blue, clearly relishes the brash attitude of the character, stating the obvious silliness of the situations at hand with some offbeat swearing. Kasumi Arimura plays the role of Green in an amusingly cutesy manner that may cross into the lines of delusions of grandeur. Her hilariously inaccurate impression of a tree is worth the price of admission. The trait of delusion also applies to Mizuki Yamamoto, who plays Navy, the only one who isn’t struggling financially, yet she comes late to battles due to superficial things like eyelash adjustments. Her best moment involves a break-up with a love interest whom may not be as handsome as people think. Jiro Sato plays Charles (with a kitten puppet for some reason) in a such a funny way of stuttering that you believe the women’s lack of faith towards him with ease.

As for flaws, as stated earlier, the repetition of jokes may irk some and some of the jokes tend to drag a bit too long, particularly jokes involving Jiro Sato’s character. Other scenes that drag too long are scenes involving a love interest (Shunsuke Daito) for Red also drag too long. Most of these scenes are in the second act and with a little editing and tightening, the film’s pacing could have been improved with a possible injection full of hilarity within an 80-minute run-time, but what we are left with is a funny 97-minute film with some unfortunate slow spots.

Nevertheless, director Yuichi Fukuda continues his winning streak of comedies with Jossy’s, a lovingly affectionate parody of the tokusatsu genre and with its winning performances from its lead actresses, off-kilter jokes and its comically low-budget production values, it’s a hoot worth looking out for.