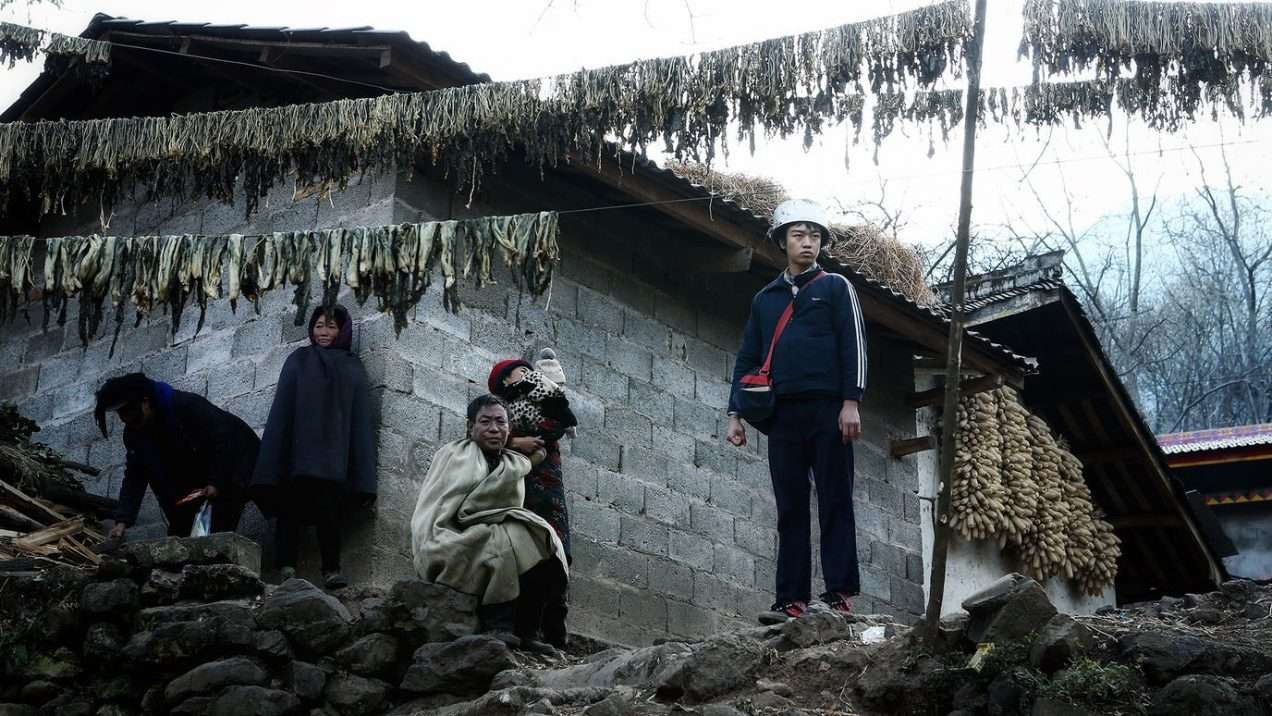 In recent years, deep exploration of genres such as film noir or thriller took contemporary China’s art cinema to a new place, bending and questioning the boundaries between mainstream and niche. Young Chinese filmmakers are especially versatile in subverting genre narratives and playing with the history of cinema. In her full-length directorial debut, Summer Blur, Han Shuai uses the conventions and tradition of film noir to reflect on the horror of puberty narrated from the perspective of a teenage girl. While Summer Blur focuses on girlhood and gender, on the other side of the spectrum there is Kong Dashan’s directorial debut – Journey to the West – an exciting dive into science fiction and adventure films, but also an exploration of boyhood and interplay between fiction and reality. Screening as part of this year’s International Film Festival Rotterdam title, Journey to the West, took me on the most exciting quest through Sichuan and made me recall hopping on a train heading to China’s Western regions which now, from the perspective of 2 years into the pandemic, seems almost utopian.

Tang Zhijun, editor-in-chief of Space Exploration magazine, is struggling to keep the magazine afloat. 50-something Tang firmly believes we are not alone in the universe, but his dreams constantly clash with reality. When he reads the news about one peasant’s encounter with an alien in rural Sichuan, he goes on a quest together with his friends to investigate the case. The statue of a stone lion seems to hold the key to the mystery. Tang Zhijun soon meets a local young man, Sun Yitong, who writes poems and claims that he received instructions from aliens. Tang and his friends follow Sun on a journey deep into the Southwest.

Journey to the West begins with a short throwback to the year 1990 and VHS aesthetics. The opening scene sets the tone for the whole film which combines self-conscious nostalgia with a sense of wonderment that arises from unrestrained exploration of the world still perceived as full of unknowns only waiting to be discovered. While watching the film I kept asking myself: what triggers this awe? Journey to the West revives a certain childhood experience shared by many Millennials: the fascination with old media such as analogue television, radio broadcasting and print newspapers which at the time seemed to be a source of some kind of transgression that bore a promise of limitless knowledge, pleasure and mystery. Although the feeling is obviously long gone, seeing the main character, Tang Zhijun, saying that electronic appliances are means of communication with UFOs brings back some memories. For 7-year-old me, it was hours spent resetting the control panel on my grandparents’ old TV set (Soviet “Rubin”) to find an unknown channel amidst the static noise. Although the story is set in the 2020s, contemporary technology plays a minor role in Journey to the West, because of Tang’s obsession with old media. It made me wonder if contemporary 7-year-olds feel the same sense of wonderment while using various apps on smartphones.

Kong Dashan uses elements known from various modes of filmmaking connected with different forms of media. “Talking heads” interviews, rapid zoom-ins, and hand-held footage is reminiscent of content made for television (news, reality TV) but tap into the tradition of documentary filmmaking and its specific place in the history of Chinese cinema[1]. The visual style of Journey to the West is also marked by the aesthetic of old media: the texture of VHS recording, blurred images captured on early digital cameras. Music featured in Journey to the West also is reminiscent of late 1990s till mid-2000s, from the soundtrack featuring songs such as《从头再来》and《爱的奉献》till mobile phone ringtone set to Beethoven’s “Ode to Joy”. However, the term now sounds paradoxically old-fashioned, extremely outdated and largely forgotten in the discourse on contemporary cinema, there is something very postmodern about Journey to the West. And it is fun (regardless of how bad the escapism is now perceived).

The story is largely driven by the actions of Tang Zhijun. He is seen by his friends either as pseudoscientist (minke 民科 which literally means “scientist from among the people”) or a father figure to the younger characters. The archival TV program proves that in the 1990s – the early days of capitalism in China when any entrepreneurial initiative had a chance to achieve great success – Tang was thriving. The disconnection between Tang and contemporary reality produces a well-balanced combination of drama and comedy. After three decades marked by a family tragedy, he earns money giving lectures at a psychiatric hospital and sells off the props stored at the Space Exploration magazine office. Tang resembles a modern-day Don Quixote, an idealist, a dreamer, an anti-consumerist disconnected from the increasingly excessive capitalism in China. Although the main plot centres on Tang Zhijun, the supportive characters have their own stories and very distinct features that are a source of many strange events and most hilarious lines of dialogue in Journey to the West. The character of Sun Yitong is especially bizarre and mesmerising, because he seems simultaneously down to earth and completely disjointed from reality. When he says: “I only have one book at home. Chinese dictionary.”, it is impossible not to burst out laughing. It also hints onto a magical quality of words and language, which is reflected in the names of locations such as the Burning Birds Nest Village (Niaoshaowo, 鳥燒窩).

Journey to the West is yet another title in which young Chinese reflect on the chaotic nature of filmmaking and various compromises that need to be made in order to finish the work, no matter if it is big or small budget. In one hilarious scene, the characters are visited by the crew shooting 2019 science-fiction blockbuster The Wandering Earth. The director Frant Gwo has to buy the old space suit from Tang, because the film budget is running out and the crew has to save up on costumes, although Gwo is unhappy with it. The Wandering Earth director and producer play rock-paper-scissors to decide if they take the prop, the interaction between the two being very reminiscent of the scriptwriter-director dynamic in Wei Shujun’s Ripples of Life. Long Dashan’s debut is a fascinating case of an art-house auteur film that questions the division between the niche and the mainstream. Backed by the biggest film studios in China – Wanda Pictures, Huayi Brothers, Alibaba Pictures, China Film Group Corporation – I believe Journey to the West shows two important things about the Chinese film industry. One, social networks can overcome any labels. Two, big companies are willing to support young filmmakers and invest in auteur projects that have a chance to enter the film festival circuit. On the other hand, there are elements in Journey to the West (for example, slapstick, subplot centring on family issues, wedding scene at the end of the film) that strikingly resemble a Lunar New Year films (hesuipian 贺岁片) made in 1990s Hong Kong. Such productions became a template for the development of Mainland Chinese blockbusters. That connection makes Journey to the West a deeply fascinating example of contemporary Chinese cinema and the ambiguities hidden within.

Kong Dashan’s film made me think about the representations of Chinese rural areas circulating in visual culture and the change these images underwent through the decades, from the 1950s worker-peasant-soldier films to the videos posted on Kuaishou. The content published on the app makes me wonder if the short videos are a precious chance for the people living in rural areas to express themselves or are they a result of self-orientalisation – the low-income population’s chance to make money out of online streaming. Most probably it is both and everything in between, but a film review does not offer a space to discuss a topic that might as well be a solid starting point of a PhD thesis.

The spirit of play permeates Journey to the West, and it is why the film approaches reality in a slightly different way than most of China’s art cinema titles do. In his directorial debut Kong Dashan constantly switches between immersion into fiction and shattering its illusion. This balancing leads to the most enjoyable dialogue between the filmmaker, the audience, and the film itself.

Journey to the West screened as part of the 2022 International Film Festival Rotterdam.