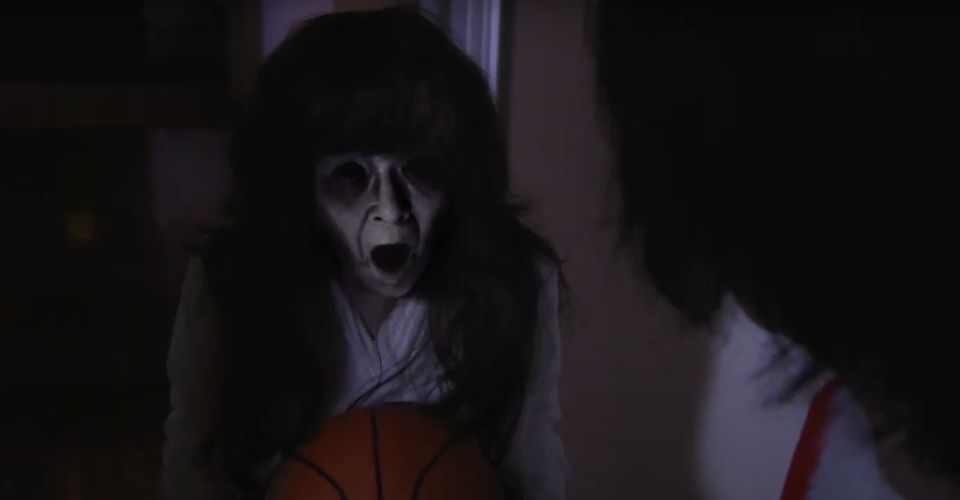 Back when Ju-On: The Grudge first found an international audience most of us didn’t realise that it was in fact a sequel, the second in fact, to a pair of straight-to-video releases by creator and director Takashi Shimizu.

A lot’s happened since then. Another sequel, two US remakes/remodels, all of which at least had director Shimizu on board (and even used some of the same locations and scenery). Then there’s another American entry into the franchise, imaginatively titled The Grudge 3 – seemingly without Takashi’s input, ironically straight-to-video itself and thankfully forgotten.

(Not to mention Takashi’s own, very silly, Ju-On based cameo in the recent Vampire Girl vs. Frankenstein Girl.)

Now comes two short films by new directors celebrating 10 years of the Ju-On phenomena (which seems odd as it still seems to be impossible to get hold of the video originals legitimately!) overseen by Shimizu himself, and ask you to decide which is scariest.

(It won’t take you long to work out where my vote goes!)

First up is writer/director Ryuta Miyake’s take on the Ju-On myth on Ju-On: White Ghost. In quite a basic rerun of the original plot line, an extended family move into the cursed house Soon the son of families older sister, returned from failing an entry exam, begins acting strangely, and before you can say Amityville II: The Possession you can guess exactly where this is going!

Of course, the plot is somewhat more clouded thanks to the trademark Ju-On character title cards and non-linear narrative, hiding behind confusing and impossible time shifts – much like Takashi’s own Ju-On: The Grudge 2.

Ryuta attempts to evoke the DV immediacy of the original Ju-On films, yet lacks Takashi’s energy. Everything is too staged, too polished, to have any real impact.

The real problem us that Takashi’s style of shocks, and indeed J-Horror in general, is actually pretty hard to carry off. Show too much, or have it look too cheap or pathetic, as Ryuta too often does, then the risk is the whole thing looks more like a spoof, or worse still a re-enactment put on by a school am dram society.

Ryuta’s only recourse is to try and fit the body count of a feature length movie into an hour – which simply results in one-dimensional characters with no resonance at all.

It’s a far more considered film, and even though once again no one’s us going to expound on the originality of the basic pretext – which, without spoiling the film involves a vengeful unborn spirit (see The Unborn, US or Thai, The Eye 2 or Tamami: The Baby’s Curse and others for more of that ilk) – there’s no denying Mari brings some class, intelligence and proper chills to the material, understanding the flaws in showing us too much.

So it’s a tale of two sides – one fab, the other almost as forgettable as the US incarnations. Both films feature references to the ghosts of the originals, and even a neatly underplayed reference to each other in a shared character of a taxi driver.

Now if only a distributor would pick up on the original video releases and put us all out of our misery!

Information of the final versions special features were not available for the review, but it appears to include just the joint trailer for the films.