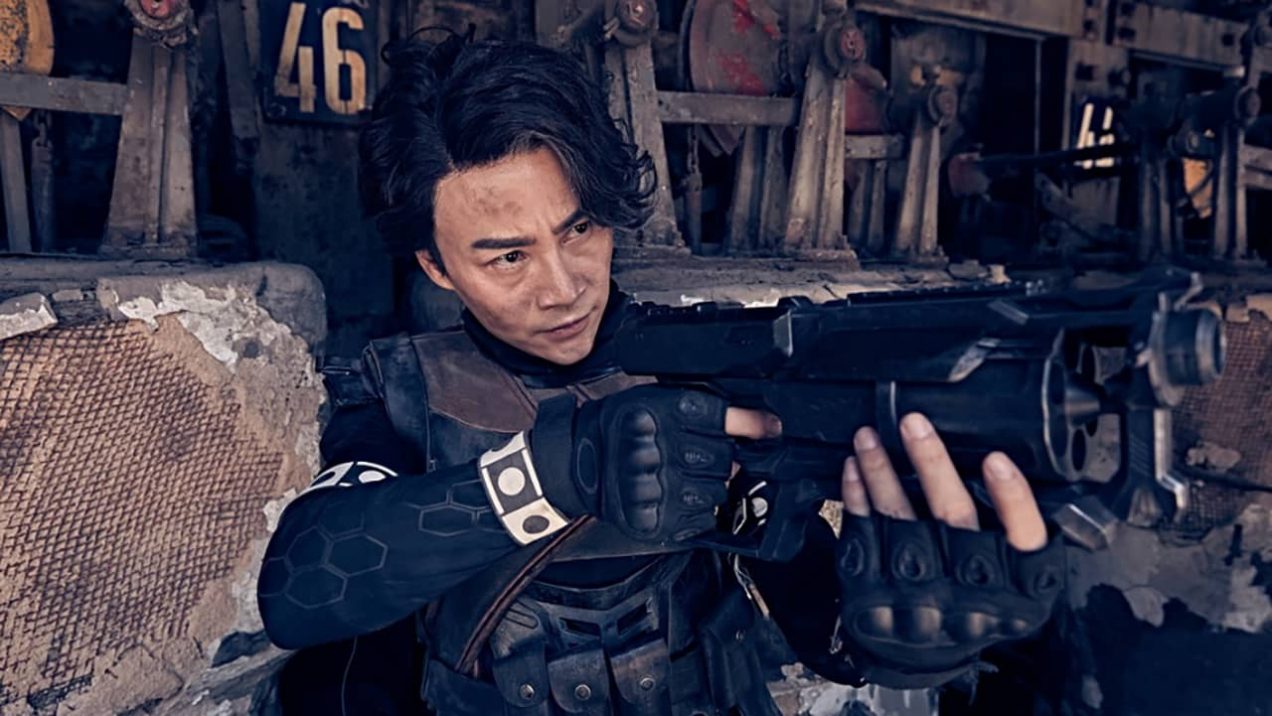 Stuntman turned actor Tiger Chen has had an interesting career of late his friendship with Keanu Reeves had helped him in securing a leading role in Reeves’ directional debut Man of Tai Chi. It was a promising start and we all know that Chinese cinema is in need of some fresh martial arts actor, sadly Tiger Chen does not quite deliver the goods. Tiger Chen’s latest feature Kung Fu Traveler is produced by iQIYI. iQIYI’s web-based site champions original features and series, churning countless projects that may sound good in theory but it’s not quite so, often quantity is satisfied rather than quality.

It’s 2147 the world has been invaded by aliens and humans are losing the war. During the humans’ last stand in protecting their command base Chen Hu (Tiger Chen), his teammate Zi Yin (Wang Zhi) and his team of robots fight a losing battle. Chen Hu uses his martial arts, Nan Quen to successfully take down one of the alien foes. Retreating to there command centre the high commanders make a decision that the only way to defeat the aliens is to program all there robots with Chen Hu’s martial arts but Hu thinks that his skills is not good enough and they need to learn from the very best. So they formulate a plan to travel to the past and find the best Nan Quen master, Zhou Cheng Lin (Yang Zhe). Zi Yin creates a robot with the look of Chen Hu and they travel together to 1885. Masquerading as a foot soldier, Ah Jie, he immediately meets Zhou Cheng Lin who refuses to take disciples but agrees to have his brothers to teach him because Zhou’s daughter, Xiao Hua (Ye Yun Fei) has a thing for Ah Jie and he believes Ah Jie has a good heart. Soon each master is mysteriously killed off one by one resulting in Zhou taking Ah Jie as a student. Along the way, Big Brother (Sheng Gang), Zhou Cheng Lin’s long lost disciple as well as Xiao Hua’s greatest love reappears after being presumed dead. Ah Jie soon finds out learning martial arts isn’t as easy as it seems for a robot, to fully learn the art he will need to be able to feel nature so Zi Yin programs Ah Jie with the ability to feel emotion. Having finally mastered all he can there assignment is near completion, their final task is to upload the data on to a memory stick and place the item in the designated location where the future can find it but Ah Jie with his new found emotions towards Xiao Hua and his comrades makes a decision to stay and fight beside them.

Tiger Chen never really had the presence to carry a full feature film, his leading debut in Man of Tai Chi was passable if a little mundane and the Kungfu Man was lack lustrous, Kung Fu Traveler pretty much treads the same path. Chen’s performance is very one-note and flat demonstrating little range in emotions. Future Chen also sports a horrible hairstyle. Wang Zhi’s emotions are highly exaggerated with most of her time spent looking at computer screens. Sheng Gang borders on comical as the villain most of the time it involves him scouring at people and having half his hair covering his face to remind everyone how evil he is. His very appearance is transparently evil so any mystery is removed.

There are so many lapses in logic that one would struggle to begin with. Why send Chen Hu back to the past to learn one specific kung fu? Why not learn them all to give them an advantage in the war? Why bother learning kung fu if they have a time machine where they can travel at any point in time to turn the tide of war? Where are they getting their technology and electrical power in 1885? How does the alien race know they have travelled to the past to learn kung fu? How are the aliens able to travel back in time? Most of these are left unanswered. Things are very predictable and progress in the way that one would expect. Everything is telegraphed very early on so they there is little emotional payoff.

The visual effects are serviceable though the creations have little personality matters made worse for how little screen time is given to them resulting in human races annihilation barely registering. Animation for the aliens and robots are not smooth sometimes coming across like a poor man’s computer game. For those expecting lots of kung fu versus alien fights will be disappointed as about 90 per cent of the film is set in the past, aside from the opening shoot out/fight everything else is set in 1885. The fights themselves are uninspired borrowing a lot of moments that we have witnessed before in better films. There is a healthy quantity of fights throughout the film but they rarely excite. Chen’s heightened abilities and photo memory should in all logic provide with an advantage, but he just comes across as a regular fighter. Wang Zhi passes off as a capable fighter but has rarely any moments to demonstrate this. All the costars handle themselves in the action just fine but there is no standout moment to make it register. Tiger Chen is an accomplished martial arts stuntman, but he is not used to any great degree here. The final fight between Chen and Gang emulates the Wolverine/Sabretooth versus Deadpool fight from X-Men Origins: Wolverine. Here our heroes stand back to back while the villain teleports back and forth exchanging punches and kicks. This moment lasts longer than necessary for it never impresses, with the camera lingering in a static position for a far too long. There is also a moment where it’s very reminiscent of the fight between Zhang Ziyi and Michelle Yeoh in Crouching Tiger Hidden Dragon. Sheng Gang attempts to flee up a wall while fending of Chen, Chen on numerous occasions drags Gang back down. It’s too similar and lacks the fluidity and excitement of CTHD. 87eleven stunt team (action team for countless Hollywood productions; The Matrix, 300, John Wick etc.) serves as choreography consultant but one has to wonder to what capacity they aided in for nothing really stands out and as to why they would need to bring in external help considering Asia’s abundance of capable action choreographers themselves is baffling.

Budget constraints are apparent as smoke is heavily used on the battlefield to hide draw distance and the lack of extras. The first opening segment set in the future is at odds with the rest of the film; filled with weird angles and transitions mixed with strange use of overlaying frames whereas the past segments settle down a bit more as a more standard affair. The film sells on the gimmick of kung fu versus aliens that it never fully capitalise on, with very little of the alien appearance. China has failed on many occasions with incorporating martial arts with robot and aliens, Jeff Lau’s terrible Metallic Attraction: Kungfu Cyborg and Wong Jing’s Future X-Cops are prime examples and now we can add Kung Fu Traveler to the list. Souring matters is the 2018 more successful release of Beyond Skyline that demonstrated it is possible to make a decent martial arts mixed with aliens film.