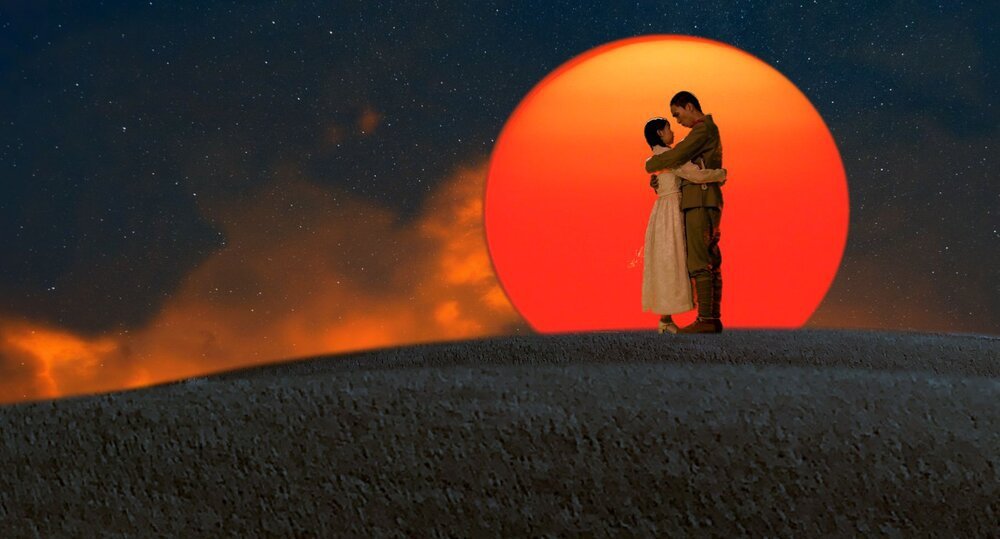 Nobuhiko Obayashi’s final film, Labyrinth of Cinema has its premiere in Tokyo International Film Festival in November of 2019.  It was due to get its theatrical release on April 10th, 2020, eerily yet also somehow very fittingly, on the very day Obayashi himself left this earthly plane, but sadly the premiere was pushed back due to the COVID-19 pandemic. It is by all accounts a great culmination of his prolific career, encapsulating the techniques, themes and idiosyncrasies that his work is known for. It is a story of war, of peace and of one man’s hopes to bring an end to a violent course of human history.

The story involves a small seaside movie theatre that is about to close its doors for good. As a final farewell, the owners have chosen to showcase an all-night festival of Japanese war films. A heavy storm has blown into town and as a result the otherwise nearly abandoned theatre is packed full of people. In the audience sit three young men: a boy-next-door-type hero Mario Baba (Takuro Atsuki), a son of a monk and a wannabe yakuza Shigeru (Yoshihiko Hosoda) and an amateur historian Hosuke (Takahito Hosoyamada). Alongside a young schoolgirl/ghost/possible space traveller Noriko (Rei Yoshida), the unlikely threesome find themselves sucked in the middle of the films they are viewing, all experiencing the events from their own, unique point of view. The all-night movie marathon starts with tales of feudal Japan, Boshin war, Sino-Japanese conflict and slowly move toward the Second World War and the tragic events of Hiroshima, taking our protagonists along for an adventurous ride.

As this is an Obayashi production, expecting anything near-linear storytelling would just be foolish and indeed, the film starts with an insane bombardment of the senses. The story skips around from place to place, leaving no time for the viewer to catch their breath and figure out what is happening. The visuals are equally as dizzying, utilizing Obayashi’s trademark hectic editing style, vibrant colour scheme, stop-motion and the use of green screen to the utmost effect. Dialogue is fractured and hard to follow and cinema-style changing from musical to silent, to talkies and even animation. All this madness is intersected by the poetry of Chuya Nakahara, the same verses repeated over and over again throughout the film in little multi-coloured cut scenes. But, just like so many other films by the experimental master, from chaos comes order, and even though the film may not contain a fully followable narrative, somehow all the anarchic pieces of this meticulously crafted piece of cinema start to come together and form a larger, united picture. While you might spend the first hour just simply trying to keep up with the bewildering pace at which the film moves, suddenly you will find yourself completely sucked in and fully immersed in the bizarre, kaleidoscopic fantasy that Obayashi has so skillfully woven together and while the constant bombardment of imagery might start to feel somewhat tiresome at points, it’s usually right around then when the film hits you with a magically beautiful shot, making you forget any frustration you might have felt.

Much like Obayashi’s previous film Hanagatami, the outlandishly speedy storytelling settles down slowly the further on in the film we get, and the last third is a much more subdue affair. It’s still rich with the same colourful imagery, but the pace and storytelling change into something more coherent, leaving a surprisingly peaceful ambience in its wake. And peace, of course in the centre of the film. Like Hanagatami (2017), Seven Weeks (No no nanananoka, 2015) and Casting Blossoms to the Sky (Kono sora no hana: Nagaoka hanabi monogatari ,2012), it may be a film concerning war, but the central theme as always, is Obayashi’s message of peace. In Labyrinth this message comes across loud and clear. There is no glorification or romanticizing of war, just contemplation on human nature, our warlike drive and whether we will ever learn to let it go.  As the film draws to close, the screen is filled with a magnificent green screen sequence of warships floating on a bay at sunset, as the narrators ponders: “All humans on Earth wanted to go to war. It’s a past that can’t be reversed. But each of us has a power to make a future where war has no place in everyday lives.”.

As much as Labyrinth of Cinema is an anti-war film and absolutely a major part of the bigger tapestry of Obayashi’s thematic work on the subject, it also seems like his love letter to cinema itself. Everything from its setting in an old, rickety movie theatre, to the audience members being sucked into the films (both physically and metaphorically it seems) to the exuberant use of the techniques synonymous with his work, just scream love toward the art form and everything that surrounds it. There is a sense of nostalgia, a bittersweet goodbye to someone you have loved greatly and that has loved you back with equal passion. Whether this was Obayashi’s intention, I cannot be sure, but it seems only fitting that someone who dedicated their career to innovating new, unique ways of exploring the medium of film, would create such a piece as their very last contribution to the world of cinema. It is bizarre, spellbinding, at times frustrating, and totally, completely Obayashi.

Labyrinth of Cinema screens online (all Europe except UK) as part of Udine Far East Film Festival 2020, which runs from 26 June to 4 July, and as part of Japan Cuts 2020, running from July 17 to 30.

Hanagatami is available from 6th July 2020 on Blu-ray from Third Window Films.