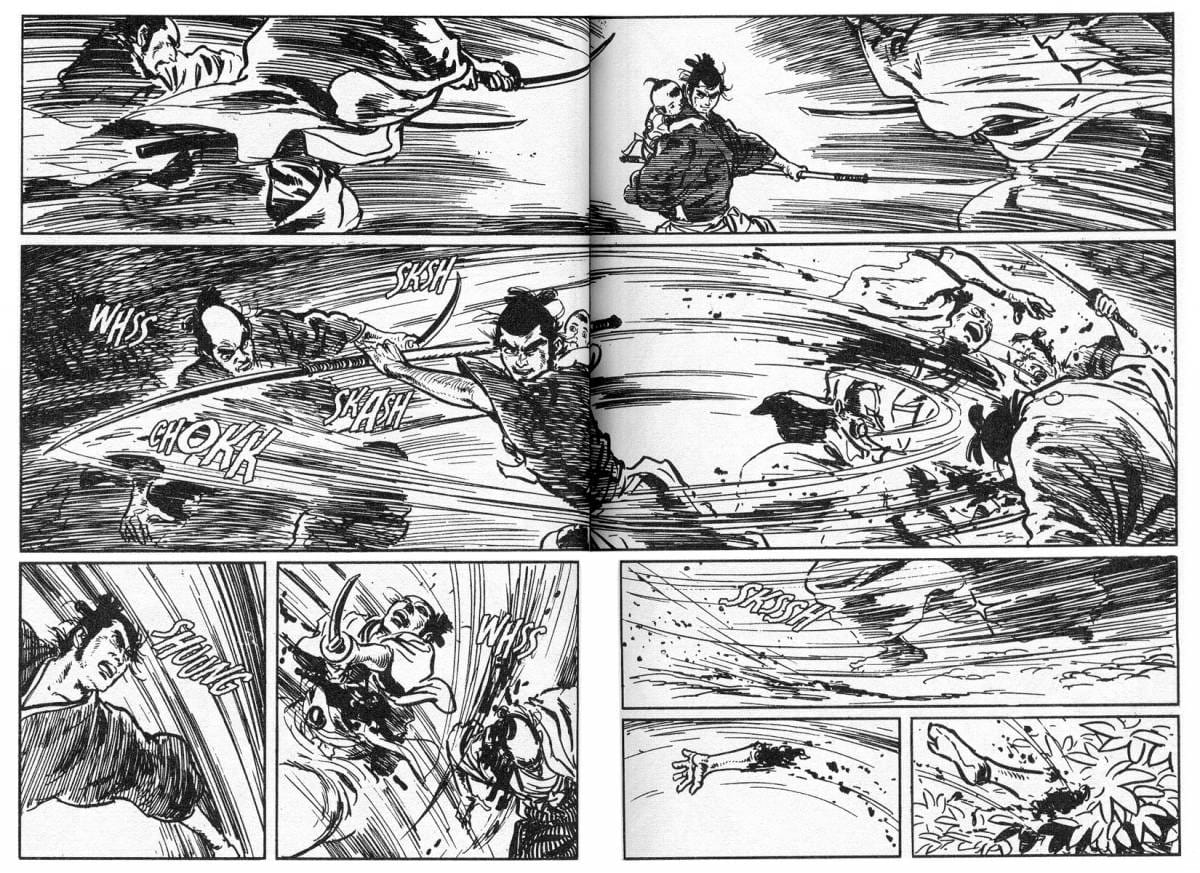 Most martial arts and kung fu movie fans fondly remember the Lone Wolf and Cub series from the early seventies, manga faithfully brought to the screen by Kenji Misumi, who also directed the original Zatoichi series in the sixties recently stylishly updated by Takeshi Kitano. Their cult following includes Quentin Tarentino, and has particular pertinence in the UK where an edited version of the first two films, Shogun Assassin, was classed as a video nasty alongside the likes of Driller Killer and Cannibal Ferox. Though violent it was neither the art nor full-on exploitation of those other films. Undoubtedly it was the exposure of Lone Wolf’s son, the ‘cub’ in question, to extreme violence that made censors hearts race. But then that was rather the point.

Writer Kazuo Koike and artist Goseki Kojima’s long running serialised manga is just as violent as it’s screen counterpart. More than 30 years after it was originally published, this groundbreaking experiment in comic book narrative literally explodes from the boundaries from the page, and still soars above modern day equivalents. Influencing generation after generation of artists not just in Japan, but also worldwide including Dark Knight creator Frank Miller and Brian Michael Bendis, writer artist of Jinx and Goldfish. Its filmic approach had a considerable impact on a medium then still, ironically, propelled by words rather than pictures to force narrative. Stories would run for pages with little more than a grunt or two for dialogue, unthinkable in Western comics where even less verbal characters like the Hulk might spend most of an issue talking to himself (albeit in a childlike fashion).

But then by American standards, Koike and Kojima’s creation was leagues ahead of anything that was happening commercial comics in the early seventies. In Japan, where content wasn’t restricted from mature content or readers expectations of superheroes, Lone Wolf found a way to venture into new territory. Kojima’s art may have had the expressive characters of Neal Adams, the creative layouts of Jim Sterenko, but went so much further than they could have dreamed. It wasn’t until Alan Moore and Dave Gibbons – two Brits – created Watchmen in the eighties that anything of this kind or scale could be seen in America outside of the independents. And that was one of the first comics from the majors to be aimed at ‘mature readers’ there, and definitely the one that opened the floodgates for more to come.

Even though such restrictions never applied in Japan, Lone Wolf was still something very special. A painstakingly researched recreation of the Edo period in Japan, it tells of a disgraced Shogun executioner Ogami Itto. Once responsible for delivering the mercy cut when samurai’s took their life and beheading them, he now roams the countryside of Japan with his son in a baby cart. Now a ronin – a rogue masterless samurai – the cart bears the displays the insignia ‘Son for hire, sword for hire’. His price 500 ryo.

The influence of Akira Kurosawa carries heavily on the character of Lone Wolf, like a later day version of Yojimbo, mysterious and enigmatic. The same character played by Clint Eastwood in Sergio Leone’s remake A Fistful of Dollars, which Clint went on to play in almost every role he’s taken since. It’s only much later we come to understand how this powerful, honourable figure became an assassin. His ongoing search for vengeance against Retsudo of the Ura-Yagyu clan, responsible for treacherous plan that saw him fall from grace and his wife murdered. Kojima was such a fan of Kurosawa the character even resembled the director’s favourite lead Toshiro Mifune. Yet like Yojimbo, Ogami’s sword skills should never be brought into question, his abilities far outreach any fool enough to challenge him. Here the influence of the popular Zatoichi series of films is also on show, of swordsman with incredible powers far beyond those ever filmed by Kurosawa. 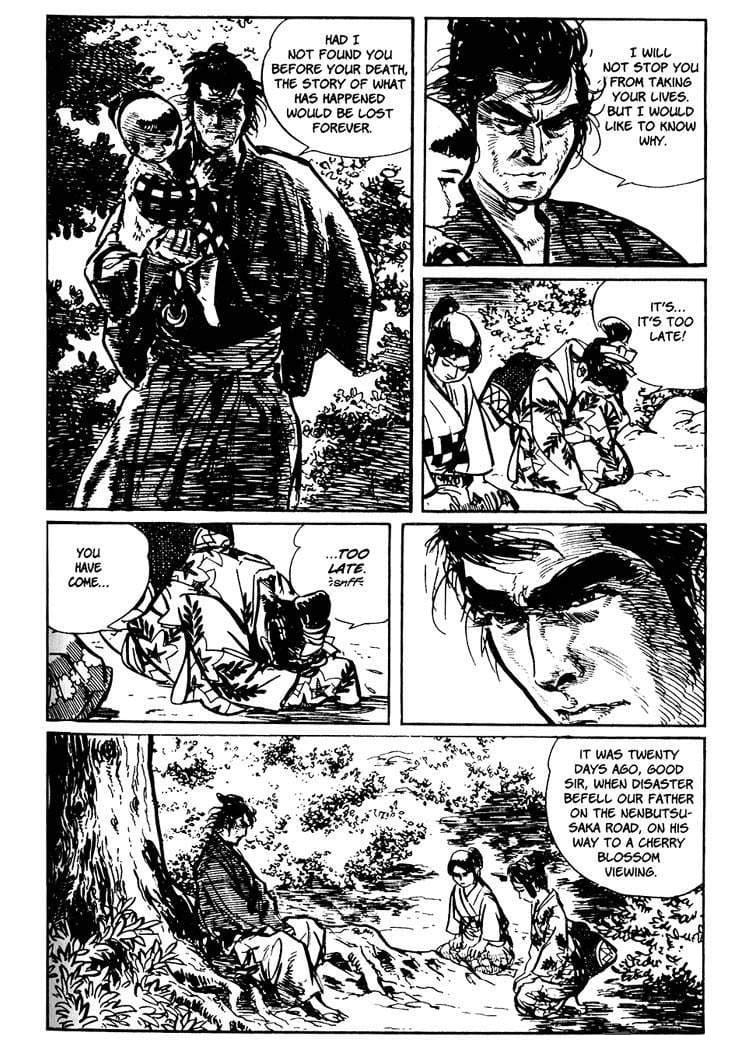 The narrative follows the pacing of those samurai movies, with long tense build-ups to relatively short fight scenes. Kojima uses such a variety of different techniques in his drawing. Soft flowing, painted shades capture the beauty of Japan. Then with harsh, black lines violence literally explodes of the page.

It was Kazuo Koike himself who adapted the stories into screenplays for the series of Lone Wolf films, one of the reasons they so closely capture the original comics. The characters were so popular there was even a television series. It wasn’t his only success, he also created the Crying Freeman character with artist Ryoichi Ikegami. 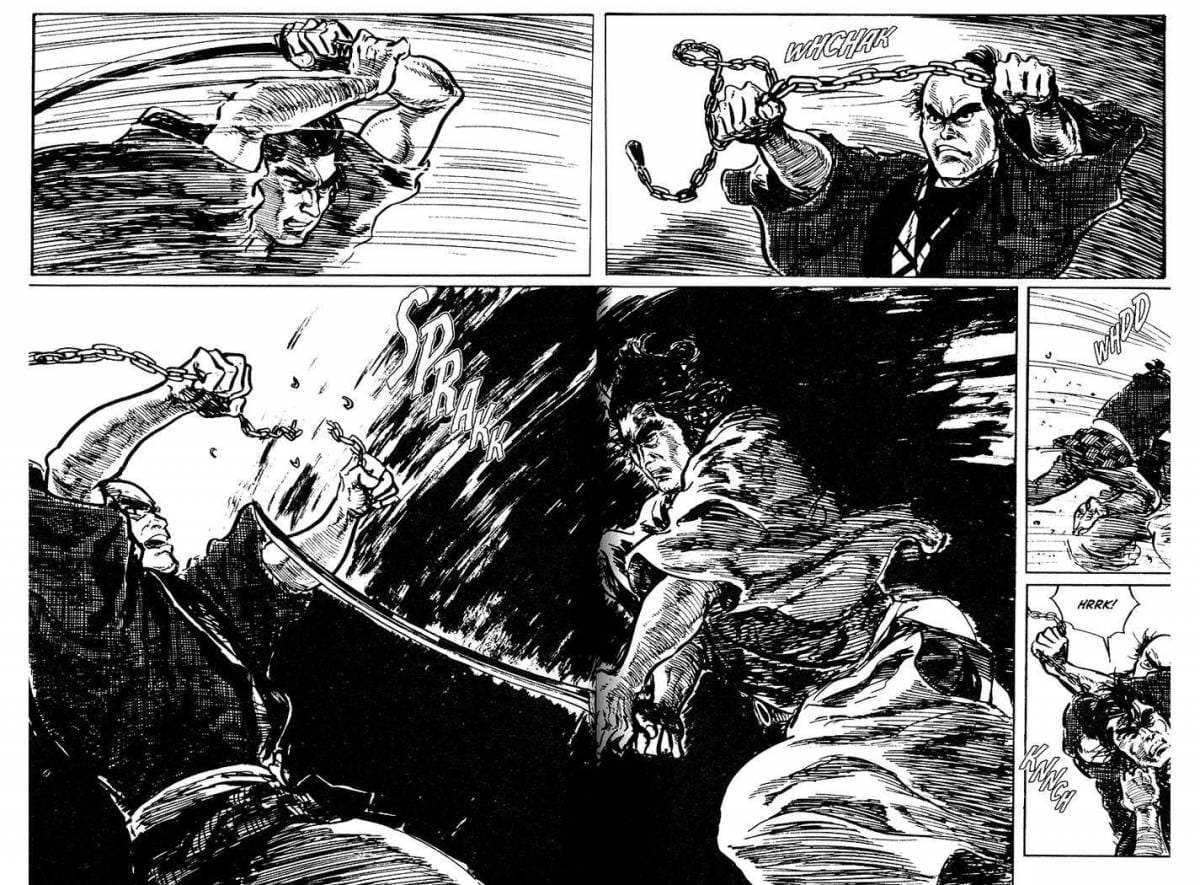 Though the comics have in part been reprinted before in the west, this printing by Dark Horse Comics was the first time they’d been printed in their original format – allowing us all to enjoy these wonderful stories in their full glory. And don’t be daunted by the scale of reprints, there are 36 volumes in the series but it’s pretty easy to pick up any of them and not feel lost or swamped by the plots and sub plots that run through the story.

Give it a try!

4 thoughts on “Lone Wolf and Cub”