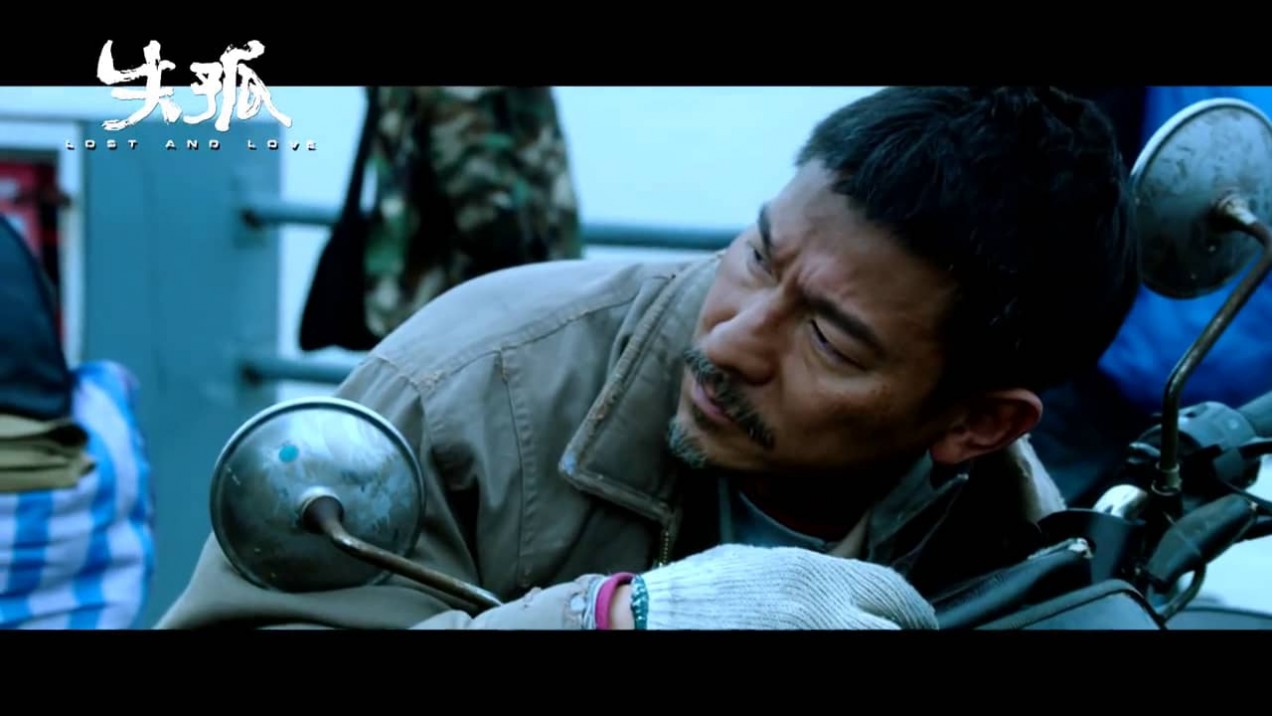 Child abduction continues to be a hot topic with Chinese film makers, Peter Chan’s award winning Dearest being followed by Lost and Love, based on a true life 2010 story that happened in Hebei. Marking the directorial debut of novelist and script writer Peng San Yuan, the film is headlined by one of Asia’s biggest and most popular stars in Andy Lau, taking a break from recent action and comedy roles in the likes of Firestorm and Blind Detective with something quieter and more down to earth.

Lau plays Anhui farmer Lei Ze Kuan, who has spent the fifteen years since the abduction of his young son Lei Da in 1999 travelling around China on a motorbike searching for him. Ze Kuan posts news of his journey online, following up on tips his receives from websites and never giving up hope despite the fact that his efforts often land him in trouble. After crashing his bike, he meets Zeng Shuai (Jing Boran, Rise of The Legend), a young man working as a mechanic who was himself snatched as a child and who has grown up wondering what happened to his real parents. The two join forces, Ze Kuan agreeing to help Zeng Shuai try and track down his mother and father, guided only by a few of his vague childhood memories.

Though the presence of Andy Lau might have viewers expecting a popcorn friendly melodrama, Lost and Love is a surprisingly nuanced and grounded film, and while sentimental and prone to the odd tug at the heartstrings it’s also harsh and realistic when needed, even showing some spiritual touches. The film is an assured debut for Peng San Yuan, who shows real talent as a storyteller, focusing on the humanistic aspects of the tragic case rather than taking the obvious route and simply trying to wring more tears from it. Moving and subtly upbeat, the film benefits from its road movie approach, which gives Peng plenty of time to explore her characters and the impact of their abduction experiences, and though there are a few dramatic set pieces along the way none of them feel artificial or forced. There’s social commentary here as well, and though the film does tiptoe around politics, Peng also explores issues of migration, economics and of the Chinese residency permit system, all of which helps to make it more convincing and relevant.

What really sets the film apart though is the superb acting of Andy Lau, here giving one of the very best performances of his long career. Although it’s never easy for a high profile star to take on the role of an everyday man, Lau pulls it off with impressive conviction, his mannerisms and delivery wholly believable throughout. Jing Boran also does a great job, with a multi-layered turn as the confused but hopeful Zeng Shuai that confirms him as a promising young actor worth watching. The developing and shifting relationship between the two is engaging and intriguing, never quite turning into the surrogate father son dynamic or generation gap angst that might have been expected.

The film has another ace up its sleeve in the gorgeous visuals and lensing by Taiwanese cinematographer Mark Lee, a multiple award winner who has worked on likes of In the Mood for Love, Norwegian Wood and other acclaimed productions. Shot in a variety of rural locations across China, the film works in some beautiful scenery including mountains, forests, fields and small rural towns and villages, being evocative without feeling too much like cinematic tourism and at times having an almost documentary like air. This helps to keep the film moving at a decent pace, filling in the gaps between its dramatic scenes and giving it a quietly epic sweep.

Lost and Love offers a take on the difficult subject of child abduction that’s sensitive, touching and cinematic as a result, and it marks a confident and accomplished debut for Peng San Yuan. Bolstered by some fantastic work by the one and only Andy Lau, it’s a film which deserves to find a wide audience, and which will hopefully help to raise awareness of the ground it covers.

Lost and Love is available through YesAsia.