Roc Tien Peng proves one of the most charismatic heroes in all of Wuxia cinema, encased in a dream-like odyssey of a film sadly overlooked…

One of my closest friends is from Croatia, and he is the only person with whom I’ve had extended conversations about old school Martial Arts movies that can correct me. This is a precious thing. He also has introduced me to some strains and movies in the vast genre. The best of these yet comes in the form of Love and Sword, a Tiawanese Wuxia that is easily the cream of the crop I’ve seen outside of the master of the deepest martial arts films ever made, King Hu. His A Touch Of Zen and Dragon Inn stand tall as pinnacles of pure, spiritual cinema that transcend genre. An actor who appeared in both, Roc Tien Peng, is the star of Love and Sword.

Hsiao Fang (Tien) is a fabled swordsman who has fallen in love with Meng Yueh Hsin (Tang Pao Yun, The Mar’s Villa), a girl whose father was killed. Hsiao vows to kill all of those involved with his murder, encountering sword masters at every turn.

Being a Taiwanese Indie production, I expected a demonstrably low budget, and cheap-looking sets, like those I’d seen in films like the Pearl Chang Ling-starrer My Blade, My Life. As the first scenes unfolded my eyes and heart were gladdened by a sense of spectacle and aesthetic grace that drew me in completely. If ever there was a genre to demonstrate how to use a low budget to your advantage, it’s Indie Martial Arts movies. Love and Sword creates a magnificently realised world, one that has room for flowing camerawork, beautifully constructed mise en scene and something that is a bit of a rarity; a concentration on character depth that is reflected in its visuals. Tien’s motivations seem straightforward, but come to the end a twist creates real emotional depth, and is reflected so wonderfully visually that it brought a tear to my eye. Favouring widescreen compositions and atmospheric swirls of mist, the film is a real treat for the eyes. Interestingly it was director Yu Kan-Ping’s debut, whose filmography is rare and seemingly does not concentrate on the Wuxia genre. A tragic love story as much as it is a story of combat, the film takes cues from Gu Long’s novels (made in to Shaw Brothers films such as Death Duel) in this way, with of course huge influence from King Hu in approach to visual style, emotional undercurrent and slowly swelling orchestration in the film’s soundtrack. The influence of Love and Sword can be seen in later classics such as Ronny Yu’s new wave surrealistic swordplay epic The Bride With the White Hair. 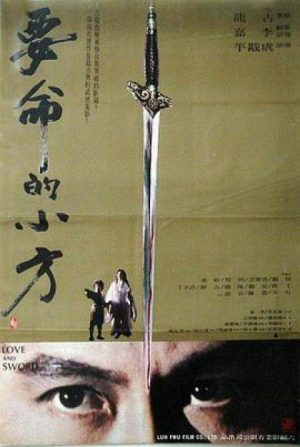 As the narrative of Love and Sword progresses, the action steadily becomes more intricate and inventively filmed. It would be a fool to think this is on purpose; that an aim of the story was to reflect the interior of Roc Tien’s suffering, and that as he slowly feels the weight of his conscience too much to bear, all he has is his sword and the moment, in which he is lost to instinct and always close to death. But, I would love to think this is the reason. Most probably, it was a production issue, and this happens in countless martial arts films. I’d love to read a book dedicated to detailing the productions of these classics. Maybe I should do it. The final two fights in Love and Sword are up there with the best of Ching Siu Tung (my favourite being the inimitable Duel to the Death) and John Woo’s Last Hurrah For Chivalry; in fact, the end move that finishes off the villain is very similar to Woo’s Wuxia theme-setting opus. There are mind-blowing combinations of kicking, beautiful intricacy in the sword exchanges, matched by pin-sharp editing. Action director Poon Yiu-Kwan, who worked on A Touch of Zen, proves his worth completely. It’s a shame he never moved higher, but then the history of martial arts movies is littered with great choreographers who never did; such as Hsu Hsia (Five Superfighters) and Taiwan’s own Peng Kang (Shaolin vs Lama) Despite the quality, some fights in Love and Sword veer between this kind of innovation and a flatness that appears lacklustre. One scene featuring some lame comedy should have been omitted and brings the film down a little. This, and another scene wherein a few ghosts appear is redolent of the genre mash-ups that happened at this time, and unfortunately, make the film suffer.

In Love and Sword, Roc Tien Peng completely outdoes himself in a performance of such charisma, vulnerability, and melancholy hidden behind his sword that it’s one of my favourites in the pantheon of Wuxia cinema. His introductory scene is a masterful dream-like sequence that is so deep in its imagining, and the whole film is anomalous to what was happening in the Wuxia and Kung Fu genre at the time. Most films were made for pure entertainment, nothing wrong with that, but Love and Sword aims high, and is close to the sheer artistic brilliance of King Hu. If you have a love for Hu’s films, you owe it to yourself to check out Love and Sword.

One thought on “Love and Sword”