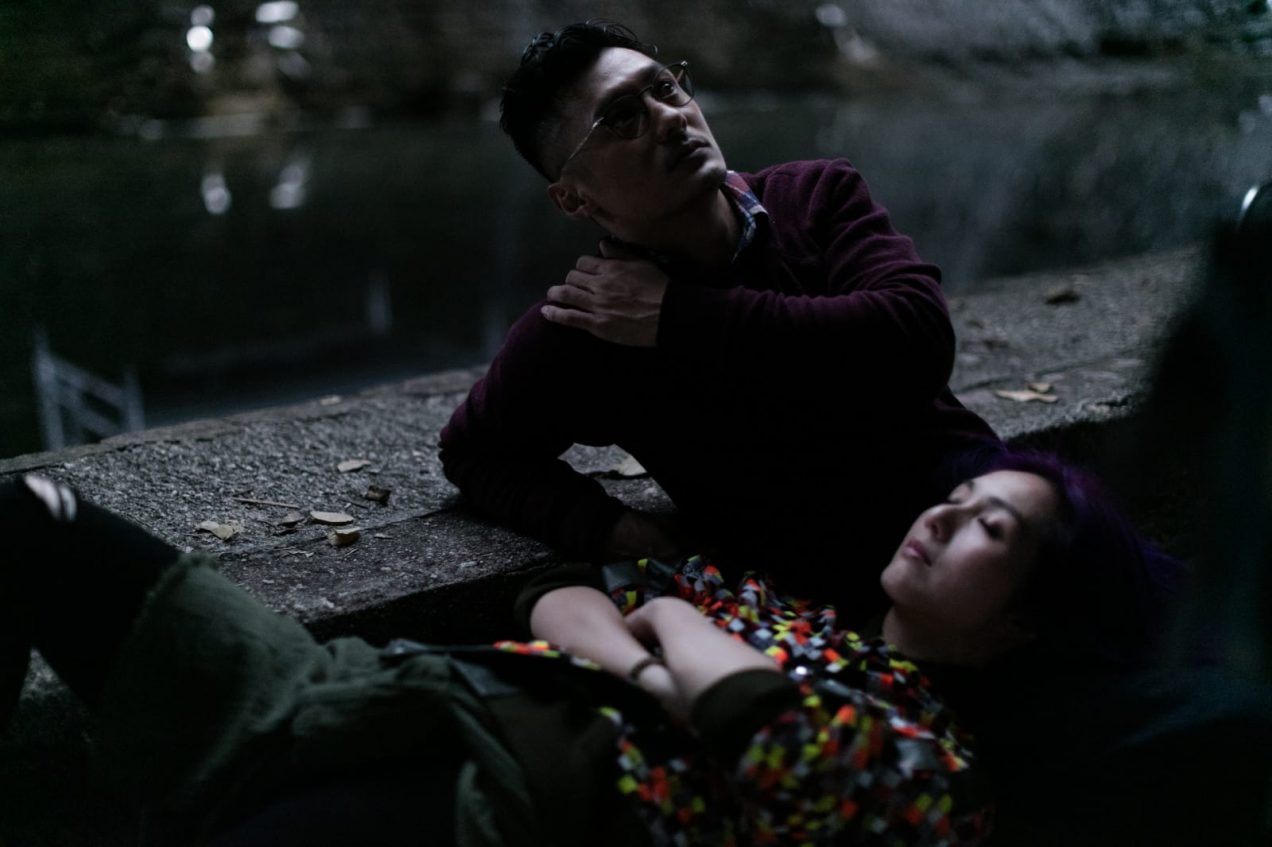 Pang Ho-cheung returns to the saga of Jimmy and Cherie with Love off the Cuff, following up on the successful and much-liked 2010 original Love in a Puff and its 2012 sequel Love in the Buff. The film finds Miriam Yeung and Shawn Yue’s relationship having moved on somewhat, and the two stars are this time joined by Paul Chun (A Simple Life) and Jiang Mengjie (Sword Master) as Cherie’s estranged father and Jimmy’s unfeasibly young and attractive godmother respectively. Having had its premiere at the Hong Kong International Film Festival, the film has gone on to play at other events around the world, again proving Pang to be one of the most prominent and popular directors working in Hong Kong at the moment.

The film opens several years after the events of Love in the Buff, with Cherie (Miriam Yeung) and Jimmy (Shawn Yue) having returned from Beijing and living together in Hong Kong. Needless to say, though the two are still together their relationship remains a rocky one, Cherie beset as ever by her worries and insecurity about her age, and Jimmy being unreliable and having somewhat of a wandering eye. Having been a couple for so many years, the subjects of marriage and children rear their heads, awakening more uncertainties in Cherie’s mind, not helped by the arrival on the scene of her father (Paul Chun) with his latest young squeeze, who abandoned the family when she was young. More trouble ensues when Jimmy’s childhood godmother (Jiang Mengjie) turns up to stay with them, who just happens to be a beautiful, free spirited young woman who has a very particular reason for coming to visit.

Like the previous two instalments, which dealt with themes of the Hong Kong smoking ban and anxieties about the Mainland, Love off the Cuff attempts to ground itself in realistic issues which Hong Kongers, and indeed people from around the world of a similar age as the its protagonists, might face in their daily lives. The difficulties of cohabitation and the stagnation of long term relationships are the main concerns here, and from early on Pang makes it clear that while Cherie and Jimmy care about each other a great deal, there are certain personality traits which are causing concern for their future. Though the two are essentially still the same characters, their main flaws, namely her neurosis and high standards and his inability to truly grow up, are magnified by their living together, and this creates a dramatic tension lurking beneath the romance and laughs, in a manner which makes it painfully obvious that their relationship (and perhaps the film series) has reached a turning point.

The various subplots that the script throws in, chiefly Cherie’s father and the revelations his behaviour brings about her past and Jimmy’s godmother, who basically wants to use him as a sperm bank, are used to amplify this, and while arguably artificial and awfully convenient, they work pretty well, helping to keep things moving. This in itself is crucial, since for the most part the film sees Pang being content to simply follow the couple as they go about their daily lives, there being little in the way of narrative drive. Of course, this is very much what fans of the series will expect, and indeed its main selling point, and Love off the Cuff is every bit as likeable and laid back as its predecessors, feeling very much like meeting up with old friends. Certainly, it’s hard to recall actors being as comfortable with or tied to their roles as Miriam Yeung and Shawn Yue are here, and for all their flaws Cherie and Jimmy are up there as one of the most sympathetic most convincing onscreen couples of recent years.

The downside to this is that that though there’s something to be said for the cinematic equivalent of hanging out, Pang doesn’t really have anything new to say, and by preaching to the choir and sticking to the series’ formula, misses the chance to perhaps have shaken things up a bit. Viewers not tuned into the characters and their relationship may feel a little nonplussed by the lack of substance or originality, and for all its undeniable charm, the film does give the impression of being a bit worn around the edges. This isn’t helped by the fact that the story, when it does surface, is a very basic romantic melodrama, revolving around the usual generic misunderstandings as it builds towards a predictable finale, and though it could be argued that Pang is only too aware of this, it doesn’t make the core plot any less mundane.

Thankfully, the film scores big when it comes to comedy, with a sharp and cutting script that works in some great gags, with plenty of genuine laugh out loud moments, balancing the crude and lewd with not turning its characters into mere figures of fun, and throwing in some cleverly worked set pieces – the opening sequence in particular stands out as one of Pang’s funniest in years. As part of this, Pang again makes the most of the more colourful aspects of the Cantonese dialect, with lots of impossibly foul mouthed and inventive cursing (most notably from Cherie and her female friends, who have most of the stand-out comedy scenes), and though sadly this will likely be lost at least in part on non-native speakers, there’s still plenty to enjoy. The film also benefits from an absurdist streak a mile wide, with lots of awkward and wacky situations throughout, not to mention aliens and a child-eating monster called Gat Gat Gang, and this scatological unpredictability helps distract from the ordinariness of the plot.

While Love off the Cuff is a film which Pang Ho-cheung could probably make in his sleep and which doesn’t technically add anything to the series, this doesn’t make it any less entertaining or amiable. Without giving anything away, it’d be unwise to bet against a fourth instalment and, especially if he can come up with something a little more inventive to test their relationship, the return of Cherie and Jimmy a few years hence would be by no means unwelcome.

Love off the Cuff screens as part of the London East Asia Film Festival 2017.