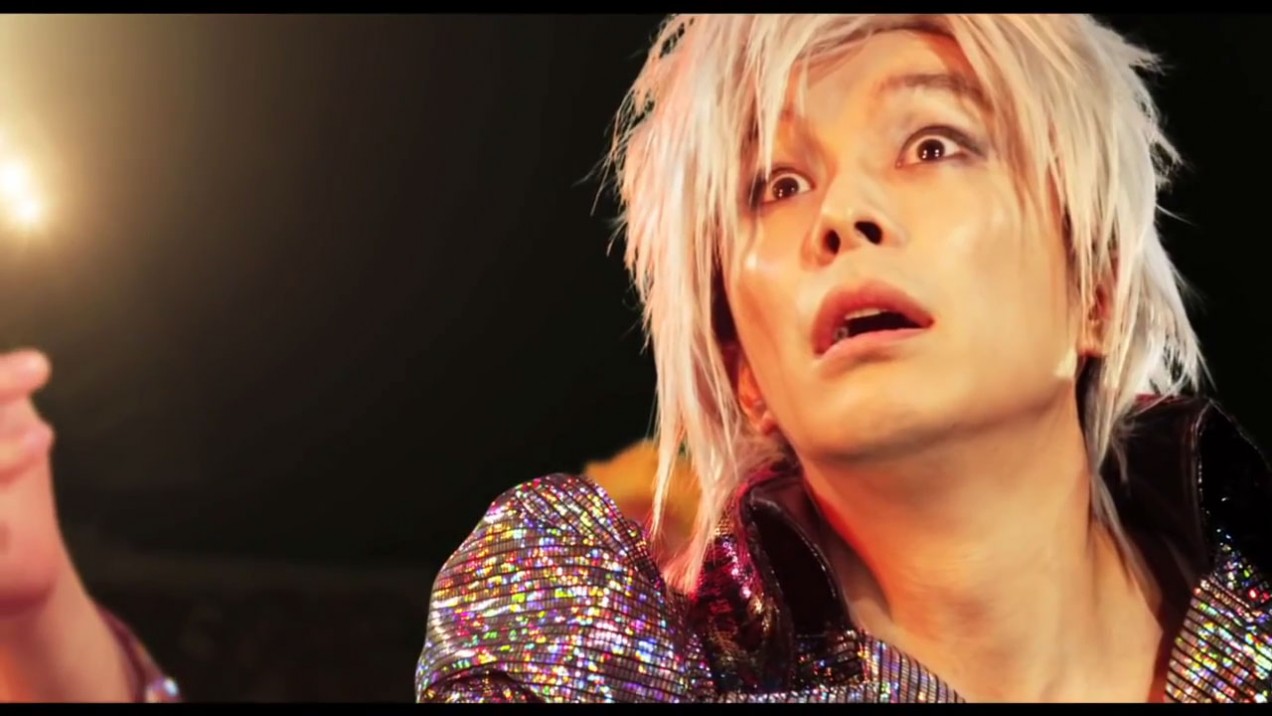 Giant wish-giving turtles and Glam Rock, who else could it be but Sion Sono?…

Ryoichi Suzuki is a loser. Bullied relentlessly at work, laughed at by news anchors on television, and abhorred by society, he just can’t seem to escape his pathetic life. All he wants is some peace, and it is only when he comes across a turtle-vendor during his lunch hour that he finds it. With a small and trust-worthy turtle by his side (dubbed Pikadon after the nickname of the Atomic bomb), Ryoichi finally finds some happiness and starts to take the pet with him wherever he goes. Ryoichi confides in Pikadon, and tells him about his dreams of becoming Japan’s top musician, selling-out the country’s 2020 Olympic stadium, and getting together with his co-worker Yuko Terajima, played brilliantly by Kumiko Aso. Seeing the love that Ryoichi has for the little turtle is heart-warming, and while it is questionable whether it is actually safe for the pet to be carried around in someone’s pocket day after day, the bond that they share is an uplifting sight.

So moving is the relationship between pet and owner that it is painful to see them be torn apart after Ryoichi’s co-workers discover Pikadon, and torment Ryoichi to the point that he decides to flush the turtle down the toilet to save him from the abuse. Immediately regretting his decision and unable to take it back, Ryoichi quickly falls into a pit of despair, and it is here that the film divides. Following Ryoichi on one hand, and Pikadon on the other. The aforementioned turtle travels through Japan’s sewers aboard a small float, and eventually comes across the home of the lost and abandoned. You would think that Pikadon comes across humans, but he is met, in fact, by forsaken pets and toys who have been given a home and the ability to talk by a mysterious homeless man. If the plot doesn’t sound ridiculous enough, Sono’s film continues, ignoring the scepticism the audience may feel in favour for an imaginative turn of events. Taken in by the mysterious man, Pikadon is given a glowing gem which is meant to give him the ability to speak, just like the others in his new home, purely by accident, though, he is given a wish gem. What else would Pikadon wish for but his master’s happiness? The only catch being that, as Ryoichi’s wishes get bigger, so too does Pikadon, and you can only imagine the chaos that ensues.

As if out of nowhere, Ryoichi’s life is turned upside down, and a chance –albeit slightly pathetic- encounter with a musician sets into motion the fulfilment of his dreams as confided to Pikadon. At first unaware of the turtle’s influence, Ryoichi is swept by the sudden fame and glory attributed to him, and the renown quickly get to his head. Renamed Wild Ryo of the upcoming band RevolutionQ, Ryoichi soon forgets his humble beginnings, and, even when faced with the true origins of his success, does all that he can to use and manipulate those around him for his own gain. A transformation like this is not new in the film industry; in fact, it is quite a tired trope. While Hiroki Hasegawa’s steady transformation from loser to prima donna is quite convincing, and his versatility as an actor prevalent, the film’s charm actually comes from his reptilian friend Pikadon. It is the turtle’s predicament that is the most moving, and Toshiyuki Nishida’s homeless man is a compelling father figure for Pikadon, and the other animals and toys. Even the abandoned toys Maria, an old doll, and Sulkie, a pessimistic cat puppet, are more likeable than Ryoichi, although this is perhaps the point.

Sion Sono’s charming and sometimes utterly ridiculous film is quite literally about love and peace – about the love between pet and master, and the peace one can find from being given support by those around you. Of course, it may not seem like that at first, what with the talking toys and Godzilla-like turtles. The film is incredible funny, with barely a moment passing where something cannot be laughed at. Even the repetitive music is enjoyable to listen to, as Hiroki Hasegawa is an impressive singer. The final act of Sono’s film does venture into far-fetched territory, and really does require the audience to stretch their imagination to be believed, but its ridiculousness only adds to the comedy of Ryoichi and Pikadon’s story. This is all testament to Sono’s skills as a filmmaker who is capable of taking the unusual and making it shine on screen.