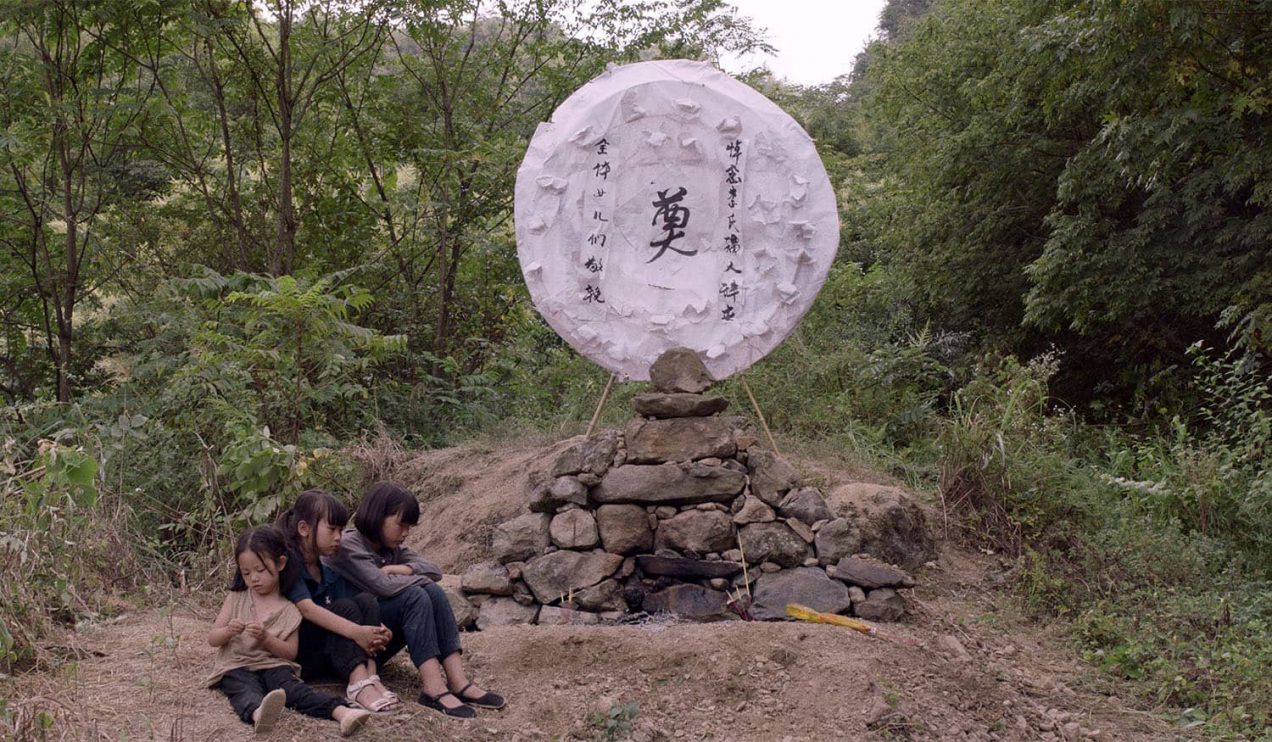 Xiaoxian and her sisters…

Li Dongmei builds her directorial debut, MAMA, upon two perspectives distant in time: her 12-year-old alter ego as well as current 30-something self. The filmmaker’s route to the first feature was complicated and long, but it might be one of the reasons why MAMA is such a mature and formally structured film. The information offered to the viewers is scarce, it matches the limited knowledge of the main character whose perspective dominates the narrative. There is an honesty and clear motive behind each measure applied by the director, who turns MAMA into a primaeval, timeless tale of life and death without losing the personal focus.

In the 1990s 12-year-old Xiaoxian lives with her sisters, grandparents, and mother in a rural area in Sichuan province in Southwest China while her father works in Dongguan – one of the centres of China’s rapid industrialization in the market and reform era. Her mother is pregnant with another child because the family insists on having a male heir to have someone to inherit the property and work in the fields. Over the course of seven days, two births and three deaths occur, one of which is of Xiaoxian’s mother. Not being able to say her final goodbyes, Xiaoxian and her sisters deal with the departure of a parent who seemed to remain a mystery to them regardless of the blood ties.  In her debut film Li Dongmei revisits memories of the summer when her mother died. The title MAMA can be a riddle as well as an expression of outcry. In Li Dongmei’s film the mother seems to be a very primaeval figure, her body combining two extremes: it is dominating and majestic as much as it is fragile and vulnerable. The character constantly awaits the time of labour, alone or in the company of her mother. In one scene they both lie on a massive wooden bed, almost immovable, as if they are already timeless, incorporated into the pale bronze background. The slow movements separate the mother from other characters. She does not talk with her daughters nor does she take part in their daily activities, such as doing homework, going to school, cooking. She is a true enigma, but regardless of her distance the camera lens frames her with silent affection.

Sisters have a much closer relationship with their grandparents, which reflects the pattern often seen in rural China since the 1990s caused by the waves of parents’ economic migration. While the elders are out working in the field, Xiaoxian takes her little sister to school, which also constitutes one of the images of an era. The social background presented in MAMA is sketched very vaguely, in tune with Xiaoxian’s still limited knowledge of the society she lives in. Although indirectly, the film draws attention to the fact that the implementation of one-child policy varied immensely throughout China depending on a specific locality[1]. The differences were not simply based on an urban/rural split. They occurred throughout time and were susceptible to changes in incentives/penalties and levels of their execution. However, the reasons for exemption remained stable. One of them was the permission to have a second child if the first one is female. Xiaoxian already has two sisters and her mother awaits the birth of another baby, hoping that this time it will be a boy. Faced with the birth of another daughter and unable to pay the fine, the policy could be circumvented by not registering the birth. However, the consequences are far-reaching such as not being able to legally go to school or work. In one scene set in a pastel green elementary school hallway the little sister waits outside of the class, in another she sits underneath Xiaoxian’s school desk, quietly moving around. Maybe Xiaoxian’s siblings are just too young to attend school so drawing any conclusions is futile. The one-child policy is not one of the topics discussed in MAMA, although its influence on cinematic reality is undeniable.

Perhaps these few scenes shot at school are so memorable because Li Dongmei herself worked as an English teacher in her rural hometown Futian. Afterwards, she became an entrepreneur setting up kindergartens. These experiences proved to be helpful while working with amateur child actors whose performances in MAMA are outstanding. Li Dongmei’s origin story as a filmmaker might seem extraordinary and very random, but creatives in China do come from all walks of life. Li decided on her current career in her early 30s. In interviews she explained that the sudden decision to study filmmaking at Victorian College of the Arts at Melbourne University was motivated by the experience of walking into an empty cinema and watching an Iranian film about one girl’s everyday life. Influence of Iranian cinema is noticeable especially in the depiction of everyday life and the relations between the siblings, but the similarities end here. Li Dongmei presents a unique cinematic world that she knows perfectly well since it is recreated from her memories and set in her hometown.

In MAMA Li Dongmei encompasses all the complex feelings related to her mother’s death: regret, sadness, fright, mystery. The reconstruction of the events might be a way of dealing with the past and inevitability of loss and death. The film turns into a ritual and a consolation, a way to accompany a parent in her/his last days when in real life one did not have the chance to do so.

MAMA premiered at the 2020 Venice Days section of the Venice Film Festival and won the Fei Mu Award for Best Film at 2020 Pingyao International Film Festival.