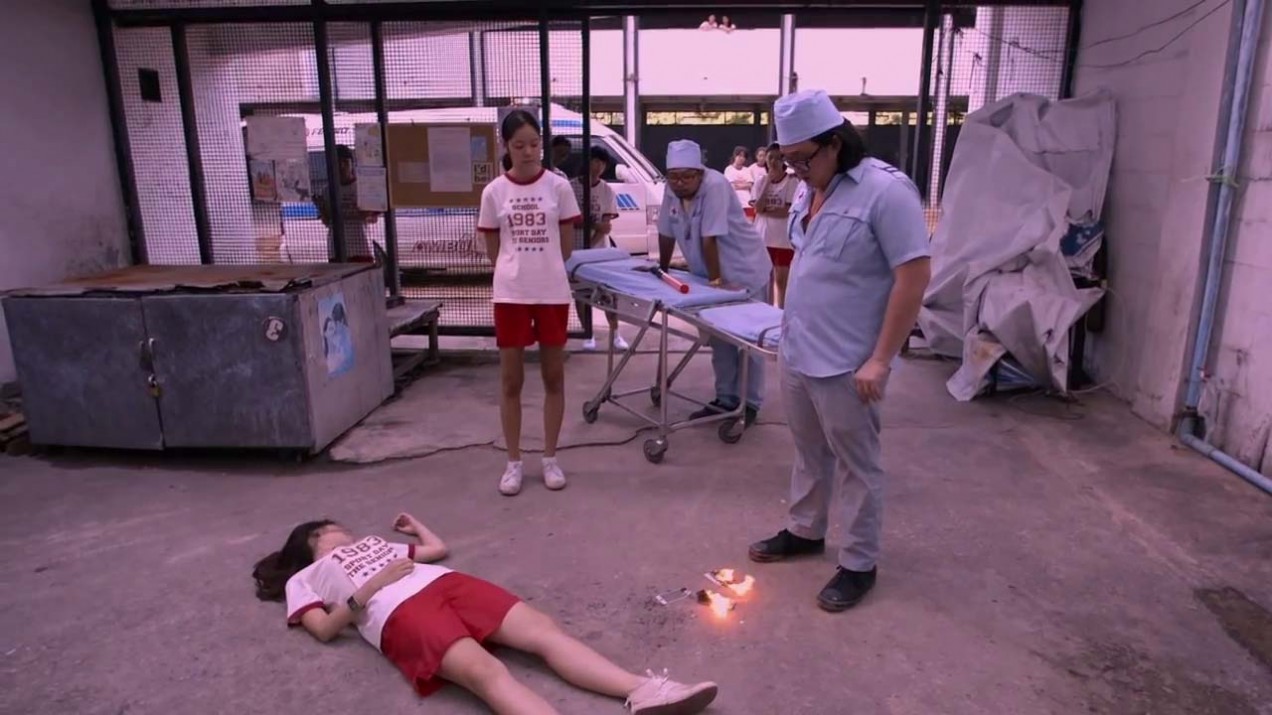 Possibly the world’s first movie based on a twitter feed, Nawapol’s feature length follow-up to 36 is equally hypnotic and full of heart…

Possibly the world’s first movie based on a twitter feed, Nawapol Thamrongrattanarit’s feature length follow-up to the wondrous 36 is equally hypnotic and full of heart, reminding us of the difficulty of being a teenager. The surreal comedy is just the icing.

Mary (Patcha Poonpiriya) is in her last term of school, and along with her best friend Suri (Chonnikan Netjui) takes on the task of producing the High School Yearbook. The issue here is that Mary is a girl whose head is full of good intentions, but is totally distracted by her inner thoughts and held back by both her lethargy and her desire for perfection. She can’t even take a photograph unless the “Magic Hour” is providing her with the perfect light, and even then she is unable to capture it. As the days progress, a series of strange and weird events befall her, along with more standard events (the unrequited first love, being on the cusp of adulthood). These conspire to lead Mary into a state of depression, leading us to wonder just what is real and what is imagined. Mary states late on that she is struggling to separate her dreams from reality, and it starts to dawn on the viewer that we are being equally confused by being privy to both.

Where the director’s previous film 36 was a set of individually titled static shots, this one takes a more ambitious, if equally innovative approach. Apparently the film is driven by 410 real life tweets by an anonymous Thai schoolgirl (@marylony) which appear in sequence throughout the movie (always with a mouse click). These are a mix of the mundane, the occasionally pretentious and often surreal. This does mean that the non-thai viewer is being doubly pressured to read what is on screen, but those of us used to subtitles should be able to adjust fairly quickly.

Visually the film is fairly basic, with short scenes shot with a handheld camera, although with much more freedom than the director’s previous film. Patcha Poonpiriya is in every scene, and manages to remain endearing and interesting throughout the entire 2 hour running time. Her small failures can be a touch frustrating, but her breakdown is totally affecting. It isn’t as powerful as the description of mental illness in “Kotoko”, but shows real power in looking at issues of failure and loss and just the general struggles one can have in adjusting to one of the biggest changes you can have in your life.

The movie is one heavy with surreal interludes and quite hilarious comic moments. I think much of the film is actually there to be interpreted rather than taken on face value. Mary’s school for example seems to be a derelict building, run by a faceless Headmaster (who appears to be a business magnate and never actually there) and literally policed by teachers who dress more like security guards. My interpretation is that this is a metaphor for how Mary is realising that life is going to change, that once graduating she won’t be able to do her own thing anymore, and that she will have to compromise to survive in society. Early on Mary does rather crazy things, like orders a jellyfish online, or gets stoned on Mushrooms. But as the film progresses more realistic events befall her, such as the rejection by her crush and the loss of someone close to her in a tragic and unpredictable manner, leading her into a spiral of depression.

Her friendship with Suri is initially very important, and she is quite different to Mary, much more straight talking and less prone to overthinking. When Mary philosophises over whether it is fate, a higher power or her own free will that makes her choose something as simple as whether to take the left or right fork on a path, it is Suri who simply answers that she doesn’t care and she will just follow her. The friendship appears to be genuine and realistic – after all who other than your best friend can get away with calling you a “slut”? The loss of Suri in the second half of the film does mean that the film loses its way to inertia, making me think that it would have been better served with around 20 minutes being trimmed.

Faults aside, this is a wonderful movie, albeit one that is experimental and rather oblique at times. When it is funny it is funny. When it is heartbreaking it is heartbreaking. In my experience Thai cinema is populated with superior horror movies, average action films and quite impenetrable comedy. Nawapol Thamrongrattanarit is a real talent, with a quite different voice. If he can get access to bigger budgets and more technical support, I believe there are films of real greatness in store.

The UK premiere of Mary is Happy, Mary is Happy screens as part of the Pan-Asia Film Festival 2014 on 2 March at the ICA London, which also screens 36 on 1 March. Tickets can be booked on the ICA website.

36 will be released theatrically on 6 June, with Nawapol’s Mary Is Happy, Mary Is Happy released later in the Autumn. A DVD and VOD release for both will follow. For more details see UK distributor day for night*.

Stephen reviewed 36 on his own site, GweiloRamblings.