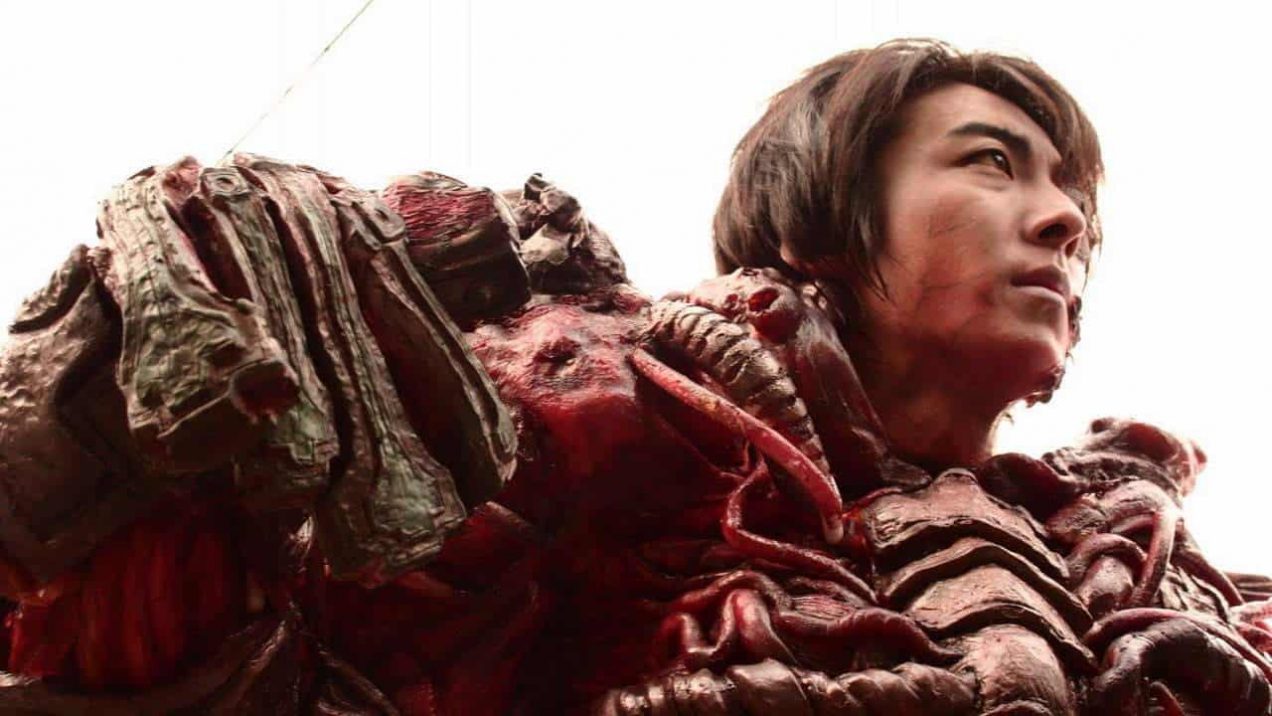 Originally released back in 2005, Meatball Machine was one of the films to kick-start the trend of Japanese ultra-violence and sci-fi gore which later saw the likes of The Machine Girl and Tokyo Gore Police exploding onto screens. The film was co-directed by Yudai Yamaguchi (also responsible for the crazed Battlefield Baseball and the creepy and unjustly overlooked Tamami: The Baby’s Curse) and Junichi Yamamoto, from whose original short film it was developed. Wild and gruesomely imaginative, the film is a distinctly ‘anything goes’ affair, mixing demented alien parasites and biomechanical mutation with star-struck romance, making for a truly unique and entertaining viewing experience. Having built up a deserved cult reputation since its original release, the film is well worth rediscovering for splatter fans unaware of its icky charms, something they now have the perfect chance to do thanks to a new Limited Edition UK Blu-ray release via Terracotta Distribution.

After an intense opening scene in which two half-human mechanical mutants battle to the death, the film switches gears somewhat, following the hesitant though touching romance between factory workers Yoji (Issei Takahashi, recently in Kiyoshi Kurosawa’s Wife of a Spy) aand the sad-looking Sachiko (Aoba Kawai, Wilderness: Part One and Part Two). The road to love is complex enough, though when Yoji discovers and takes home a dead alien parasite left over from the battle things take a turn for the insane. On the night when the two finally manage to get together, Sachiko reveals her scarred body, the result of years of abuse by her cruel father. Before Yoji can react, the parasite comes back to life and takes over Sachiko, mutating her body into a living weapon, designed for combat with other aliens who use humans as puppets in battle for sport, with the winners eating the losers. As Sachiko wanders the streets in search of foes, Yoji is rescued by a strange man (Toru Tezuka, who should be recognisable to Japanese splatter fans for his role in the Ichi the Killer), who deliberately infects him in order to feed his half-transformed daughter. Managing to somehow retain his sense of self despite his mutation, he escapes and goes after Sachiko, hoping that their love will be enough to overcome the parasites’ thirst for blood.

Basically, what Meatball Machine boils down to is a series of incredibly violent and imaginative brawls between weird mutants, interspersed with scenes of heartfelt and earnest romantic longing. Obviously, this makes for a winning mix, and the film comes across as a cartoon version of Tsukamoto’s cyberpunk classic Tetsuo: The Iron Man by way of David Cronenberg and an episode of Power Rangers. Although the budget was quite obviously low, the costumes and makeup effects (from Yoshihiro Nishimura, who went on to work on Machine Girl and Tokyo Gore Police as well as many, many other genre classics) are all excellent and entertainingly creative, with the characters’ frequent mutations into crazier and crazier weapons keeping the viewer’s jaw firmly on the floor. The gore and viscera fly thick and fast, though the film is neither particularly nasty nor sadistic, being too wacky to take seriously. This works very much in its favour, and directors Yudai Yamaguchi and Junichi Yamamoto wisely choose to inject a little intentional humour into the proceedings, such as through a hilarious scene in which Yoji visits a porno theatre, only to be assaulted by a strange transvestite.

Despite all of this, probably the strangest thing about the film is the fact that its central romance rings true, and is oddly moving, even when the blood and severed limbs are quite literally hitting the screen. Both Yoji and Sachiko are alienated loners and unfortunate victims of society, and their gradual bonding and its rude interruption are effective and winningly without too much cheap melodrama. Without wanting to belie the film with claims of depth, this does add a certain frisson to their death-duels during the last third of the film, and this emotional attachment helps to make for even more crazed fun.

This new hi-def Blu-ray release, which comes with a specially-designed slipcase, boasts a fair whack of extras, which as well as the usual slew of trailers, cast and crew interviews, image galleries and concept designs, include a newly commissioned interview with Yudai Yamaguchi and a commentary in which the director is joined by Yoshihiro Nishimura and Issei Takahashi. Also of interest are two shorts films, Reject of Death, a wild ten minute 2007 spin-off helmed by Nishimura that serves as a neat precursor to some of his own later works as director, and the earlier mockumentary What’s about Doi?, a brief piece following one of the film’s side-characters. While to be fair most of these extras have been available before, this new release provides a pretty comprehensive package, especially for newcomers, and the colourful new cover art makes the Blu a nice collectable for fans.

More than fifteen years after its original release, the violence and bizarre transformations still impress and entertain, and Meatball Machine remains an absolute must-see for all fans of wild exploitation and gore. Although it was later out-done by Tokyo Gore Police and others (including its own 2017 sequel Meatball Machine: Kodoku, directed by Nishimura), it remains one of the best of the recent eruption in Japanese splatter cinema and is well worth revisiting.

Meatball Machine is available on Limited Edition UK Blu-ray from Terracotta Distribution. Join us every Thursday for the latest in James’ #cineXtremes series.