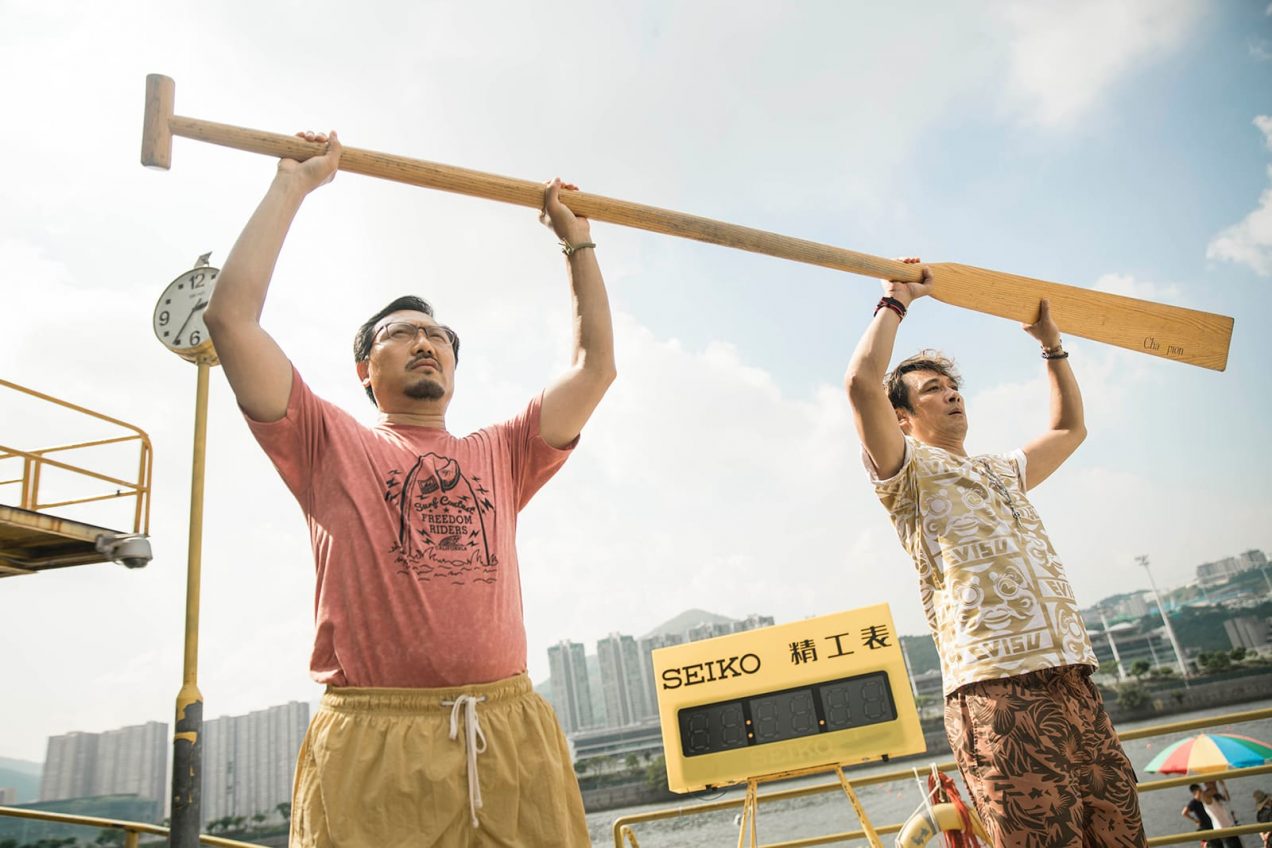 The worst thing about getting older isn’t that you get old, it’s that you increasingly look back on your early life and ask yourself the unenviable question: “where did my life go?”. For most people, the number of regrets are small, the choices easy to justify. But even if you navigate that morass, you are left with the feeling of an incomplete life. What have I never done? What will I regret from this point on? For three older guys and a younger former athlete, these are the feelings that gnaw at them in Sunny Chan Wing-sun’s Men on the Dragon.

Lung (Francis Ng Chun-yu) is the oddball leader of a group of engineering contractors working for a major company in Hong Kong. The group includes Suk-Yee (Poon Chan-leung), a man who trapped between his wife and his mother, and William (Tony Wu Tsz-tung) a younger guy with his own hang ups. Lung himself pines for his next door neighbour (Nancy Wu Ting-yan) who herself pines for the feckless husband who keeps dropping in and out of her life. The three lads are supervised by hard ass Tai (Kenny Wong Tak-bun) and their bosses just keep making enough business mistakes that the entire department keeps having layoffs to compensate. After one particularly nasty set of layoffs, the company assign the three and Tai to train to represent the company in the local Dragon boat races. The four of them are not feeling the love much for this idea. Couple that with their trainer, Dorothy (Jennifer Yu Heung-ying), wanting them to actually do some work training and they are quaking at the prospect.

I think that as I get older, I see myself transplanted less into the mono-mythic hero who comes in to save the day and more towards ensemble casts who can represent aspects of personalities where the feeling is “I know that guy” or “I know that guy too!”. Lung is the one closest to me in temperament. He’s a good guy who loves John Woo films (hey, nice taste) on laserdisc but he’s never stood up for himself. Why do it when it’s easier to snipe at management and worry that you’ll never earn the girl’s attention but only worry and never try for it? Everyone’s felt that crippling uncertainty in life but here, Lung loves his neighbour and is the best uncle to her daughter who knows Lung’s perfect but her father has too much pull on her mother. Chun-yu is a great choice in the role with his curly hair and misfit attitude. His ability to see trouble and opportunity in the same places and get away with it is perfectly complimented by Chun-yu’s “C’mon, are you serious?” performance.

William is an earnest guy with a chip on his shoulder. He was a pretty good athlete but gave it up to support himself and his girl. But this job sucks and his super, Tai, is a dick to him. Tsz-tung’s performance doesn’t ferment until the second act and comes across better once the third act starts and he finds resolution. He and we see his problems better as the film winds down. Chan-leung as Suk-Yee is a very complicated character. For the most part, he’s as opportunistic as Lung, scraping by management and trying to figure a way out of the Dragon boat training. Have you ever seen a man do training with no breaks because he’s late for a ticket scalper selling him Andy Lau concert tickets? You will here. I’m tired of watching him. But then at a certain point in the film, he has a very dramatic turn where he’s faced with a critical choice which could be ascribed as typical of men in a mid-life crisis and rather than fold into apathy, his response re-energises his need to succeed as the Dragon boat race.

I’ve held off on talking about Kenny Wong Tak-bun’s turn as Tai because his arc is tied into the actual boat race more than the others. The other guys all have problems but for Tai, the race is all he’s got. He’s facing the loss of his wife to another and his son loves him but one look and you know he’s about done respecting the old man. So when the team realise this, they quickly stop seeing Tai as an obstacle and bring him into the caper. As they get closer to the race, the company pulls the funding and tells everyone to go home. Here the film, which has been working towards building each lead up with their foibles and strengths so that they support the trunk of the story, unleashes the cast to exhort each other and better themselves.

The training becomes harder, Dorothy realises that these misfits need to win this to finally grapple with their problems, the quest for Andy Lau tickets goes on and the main cast find their garden of Gethsemane and overcome them. Whether it leads to happiness or not. Really, it’s silly to watch however you can’t help but root for the gang as they go to the trenches with the company and Tai helps them get revenge on the dastardly fiends by ignoring them in favour of the race. Films rarely come along that simply ask you to support your favourite character without making you choose. Here, Wing-sun’s direction tells us that it’s ok to like the gang and want the best for them but not to be afraid that they might not succeed.

I really enjoyed this film and the camaraderie, joy, laughs and wicked humour even in the face of heartbreak on show make it one of the best Asian films I’ve seen this year and makes my shortlist for best film of the year for its sheer exuberance and joie de vivre.

Men On The Dragon has its UK Premiere at the BFI S0uthbank on 25th January 2018 as part of the Chinese Visual Festival screenings celebrating the Chinese New Year. Tickets are available now.