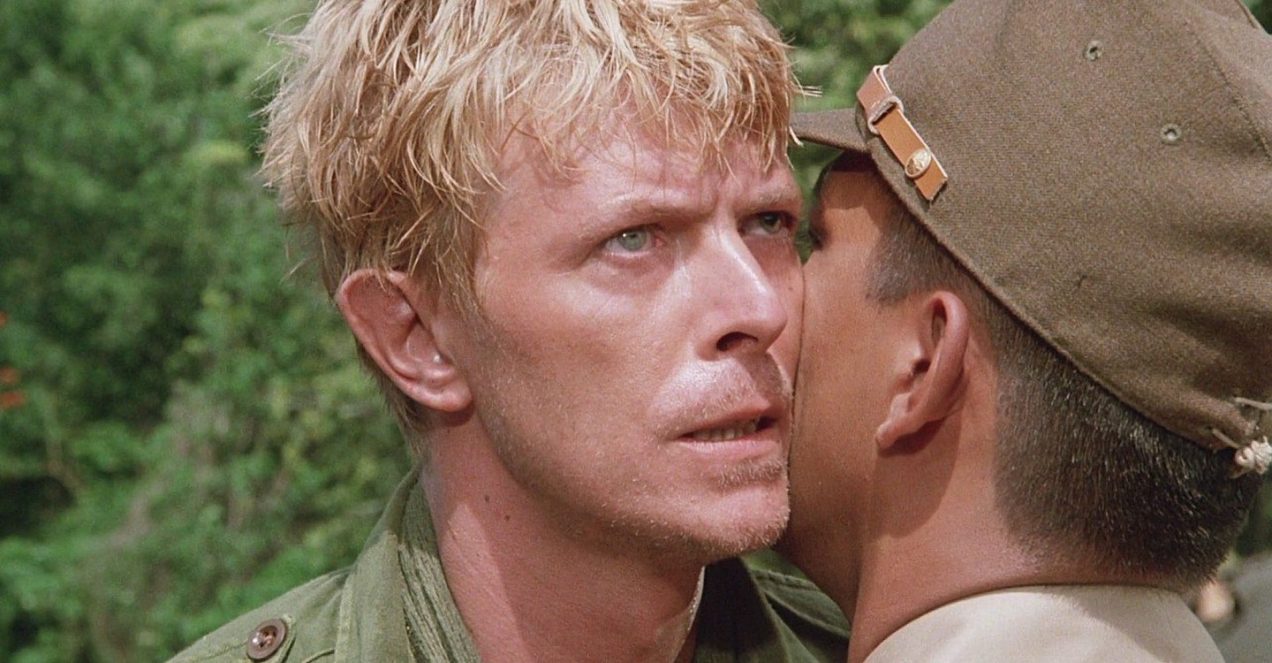 Is it the glossy music stars leading a film that’s quite actor-heavy? Is it the anachronistic synth-heavy score, at odds with a film set in a WWII POW camp? Is it the clash of two styles of acting – the naturalistic British one, and the stylised Japanese one? For whatever reason, Merry Christmas, Mr Lawrence has always felt somewhat misunderstood except for a devoted group of ardent fans (of which this writer is one). Perhaps the immediate headlines for audiences in both Japan and the West – two pop stars as leading men in David Bowie and Ryuichi Sakamoto, plus Takeshi ‘Beat’ Kitano, then one of the biggest comedic stars in Japan, suggests a film altogether different from the auteurist meditation on patriotism, duty and dogma that we instead get. Maybe this re-release from Arrow Video can rectify that – the film already looks gorgeous, and although the extras weren’t available for review, they do look promising – the usual in-depth stuff you expect from Arrow.

The most frequent comparison for Merry Christmas, Mr Lawrence has usually been David Lean’s The Bridge on the River Kwai (1957). More so than just both films being about British POWs in a Japanese WWII camp, they’re both films about how social norms shape our sense of duty, and how that can corrupt into something detrimental. But where The Bridge Over the River Kwai is epic in scope and has a much wider canvas, Merry Christmas, Mr Lawrence is small-scale and intimate, an extension and evocation of director Nagisa Oshima’s career-long thematic concerns criticising the dogmatic nature of Japanese conservatism.

The film focuses on four men; John Lawrence (Tom Conti), an officer whose grasp of Japanese means he doubles up as the go-between for the Japanese military and the British POWs under internment; Sergeant Hara (Kitano), often drunken and given to switching between sadism and friendliness; Jack Celliers (Bowie), a British POW whose arrival at the camp seems to inspire a mixture of awe and fear from both sides; and Captain Yanoi (Sakamoto), who definitely catches some sort of homoerotic feelings for Bowie. The film hinges on that relationship, with Yanoi’s sense of duty to an Imperial Japan at odds with the burgeoning feelings that are awakened in him.

The film frequently delves deep into these collegial relationships between men – where there’s a lot of sexual tension between Yanoi and Celliers (invited by the sheer magnetic presence of both their actors), the relationship between Hara and Lawrence is more amicable, even platonic, despite its undercurrent of malice – the very first scene in the film involves Hara striking Lawrence in the eye, causing him to bleed, before forcing him to watch a hara-kiri performed by a Korean soldier caught trying to rape a POW.

Oshima frequently returns to this symbolism around what characters see or are forced to see. Celliers’ fate is shaped by the Japanese military who view him more as a dangerous terrorist and the mass ranks who proclaim him an evil spirit (one soldier tries to take matters into his own hands when Celliers is in solitary confinement). His fate is also deeply shaped by Yanoi, who views him as something more beguiling, like a moth to a flame. Lawrence equally is shaped by the fact that his British comrades view him with a degree of suspicion for being to friendly with the enemy, whilst the Japanese suspect he knows too much. And then there’s Yanoi and Hara, two men entirely constrained by the impositions declared on them from above – the former fighting to reclaim his place as a venerated officer, the latter seemingly frustrated by his inability to progress further as a result of his lowly background. All of these characters find their world warped by the constraints around them. The camera replicates this imposing gaze – scenes are often shot from a distance, the camera slowly zooming in as if spying, or shot from higher up, God-like.

The performances are superb across the board. Actors as comfortable with the screen as Conti and Kitano do an unsurprisingly brilliant job, breathing life into deeply complex and tricky characters. Sakamoto too – hot off the heels of establishing Yellow Magic Orchestra as arguably the biggest band in Japan at the time – is excellently cast, his severe face suggesting a man barely containing his own rage (oh, and the film score by Sakomoto is amazing too, but you guessed that already).

But Bowie’s the real star here. Between this film and Nic Roeg’s The Man Who Fell to Earth (1975), there’s an alternate universe where Bowie did music as a side gig and instead became one of the biggest acting stars on the planet, mixing arthouse classics with popcorn fare like Labyrinth. The camera just seems gripped by Bowie, much like the characters surrounding him – he had the sort of Golden Hollywood-era charisma that all the acting schools in the world can’t give you. Here he’s deeply impassive, impenetrable, unreadable, at least until a flashback that connects the brutality of the British private school system to the brutality of a POW camp – judging by the sadism of our current leaders it’s not too far apart. The camera’s fascination with Bowie is appropriate for a film where the act of looking is ingrained from the first scene, because it couldn’t work without such a bonafide star at its centre. Excellent stuff.