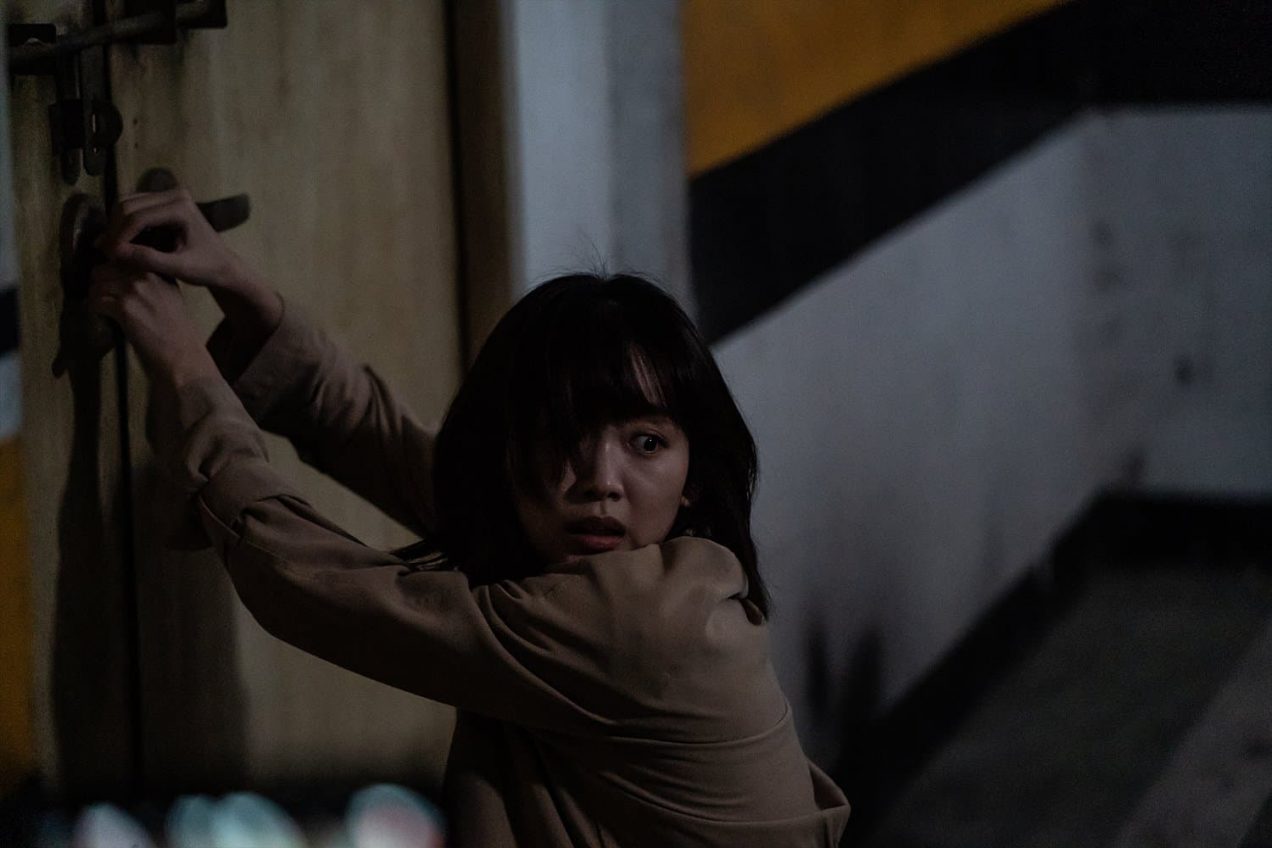 South Korea has a fine, long-standing tradition of serial killer thrillers, with the genre being so popular and prolific that by now directors with any ambition are having to come up with increasingly outlandish narrative gimmicks. First time writer director Kwon Oh-seung has certainly hit on an intriguing one with Midnight, which pits a particularly crazed murderer against a young deaf woman on the streets of Seoul one evening, a premise which results not so much in a stealthy game of cat and mouse as an hour and forty minutes of panicked sprinting.

Jin Ki-joo (Little Forest) plays Kyung-mi, a deaf woman who works at a call centre providing sign language assistance for hearing-impaired customers. On the way to meet her similarly-deaf mother (Gil Hae-yeon, House of Hummingbird) after work one night, she crosses paths with So Jung-eun (Kim Hye-yoon, Memoir of a Murderer), who gets stabbed then kidnapped by roving maniac Do-shik (Wi Ha-joon, Gonjiam: Haunted Asylum). The madman shifts his attentions to Kyung-mi, chasing her through the streets with murderous intent, while Jung-eun’s brother Jong-tak (Park Hoon, Descendants of the Sun) gets worried after she doesn’t answer her phone and heads out to try and track her down.

Midnight is a great example of how to pare down the thriller form to its bare bones, keeping the focus firmly on the action and ditching anything which gets in the way of the central conceit. The film is very different to other similarly-themed Korean offerings in this respect, with Kwon Oh-seung avoiding the usual melodrama and backstory padding, the characters being bounced around mercilessly at speed, defined only by their roles in the progression of the narrative – Kyung-mi is deaf and resourceful, Do-shik is a pantomime movie maniac, and Jong-tak is angry all the time. This works really well, and the film is impressively lean and fast-moving – quite literally, with the cast members spending almost the entire duration running (or falling). Kwon packs in a dizzying number of chase scenes, and the film operates primarily as a series of sprinty set pieces, with a few flashes of violence and gore thrown in to up the sense of danger, making great use of the city’s streets and shadowy alleyways, especially when the action breaks out onto crowded pedestrian precincts. While the conclusion is never in any doubt, it’s a tense, breathless ride with plenty of entertaining twists along the way, and Kwon shows a real knowledge of what makes the genre tick.

What really makes Midnight great though is the way that Kwon doubles down on the entertainment factor, emphasising thrills over realism or coherence, keeping the viewer gripped even when things don’t make sense. While most films of the type rely to a certain extent on characters making horror movie style bad decisions to keep them in peril, here Kwon shifts this to the supporting cast, who uniformly refuse to assist Kyung-mi, let alone make any effort to try and communicate with her properly, leading to situations so surreal that even the homicidally insane Do-shik doesn’t seem to quite believe his luck. The police in particular act as buffoons, and this does give the film an underlying commentary on the treatment and marginalisation of deaf people in Korea – while also giving Kwon an excuse to work in a series of related setups and daft devices to further up the suspense.

Midnight also benefits from some great acting, with Jin Ki-joo very likeable and sympathetic in the lead. While there’s not much to Kyung-mi, Jin manages to give her a bit of an edge and helps to make her seem resourceful rather than a straight damsel in distress, despite her spending the whole film on the run. The film belongs to Wi Ha-joon however, whose performance as the bizarre Do-shik really goes above and beyond in terms of the cackling enthusiasm he brings to the role. Do-shik is easily one of the most memorable Korean maniacs of recent years, and the fact that nothing about him makes any sense only boosts the film’s entertainment factor, from the lack of any explanation for his behaviour and obsession with murder (not to mention his constant carrying of an amazingly suspicious looking bag of bloody knives) to his living in a pimped-out murder van and being able to whip out a perfectly pressed disguise at the drop of a hat. To a large extent the narrative is driven by the incredible risks he takes, perhaps spurred on by the supporting cast’s indifference to his victims’ plight, though given that he’s incredibly incompetent and prone to falling over, luck also plays a significant role in the story not being cut short very early on.

All of this makes Midnight a lot of fun, and while exhausting and unlikely to hold up to narrative scrutiny, it’s arguably one of the best Korean genre films of the last year or so. Kwon Oh-seung shows real confidence in ditching the melodrama and keeping the running time to an hour an forty minutes, and both Jin Ki-joo and Wi Ha-joon give things a real boost, even if the two must have been ready to collapse after the shoot.

Midnight screened as part of New York Asian Film Festival 2021, and is available on UK Blu-Ray now from Eureka on their Montage Pictures label.