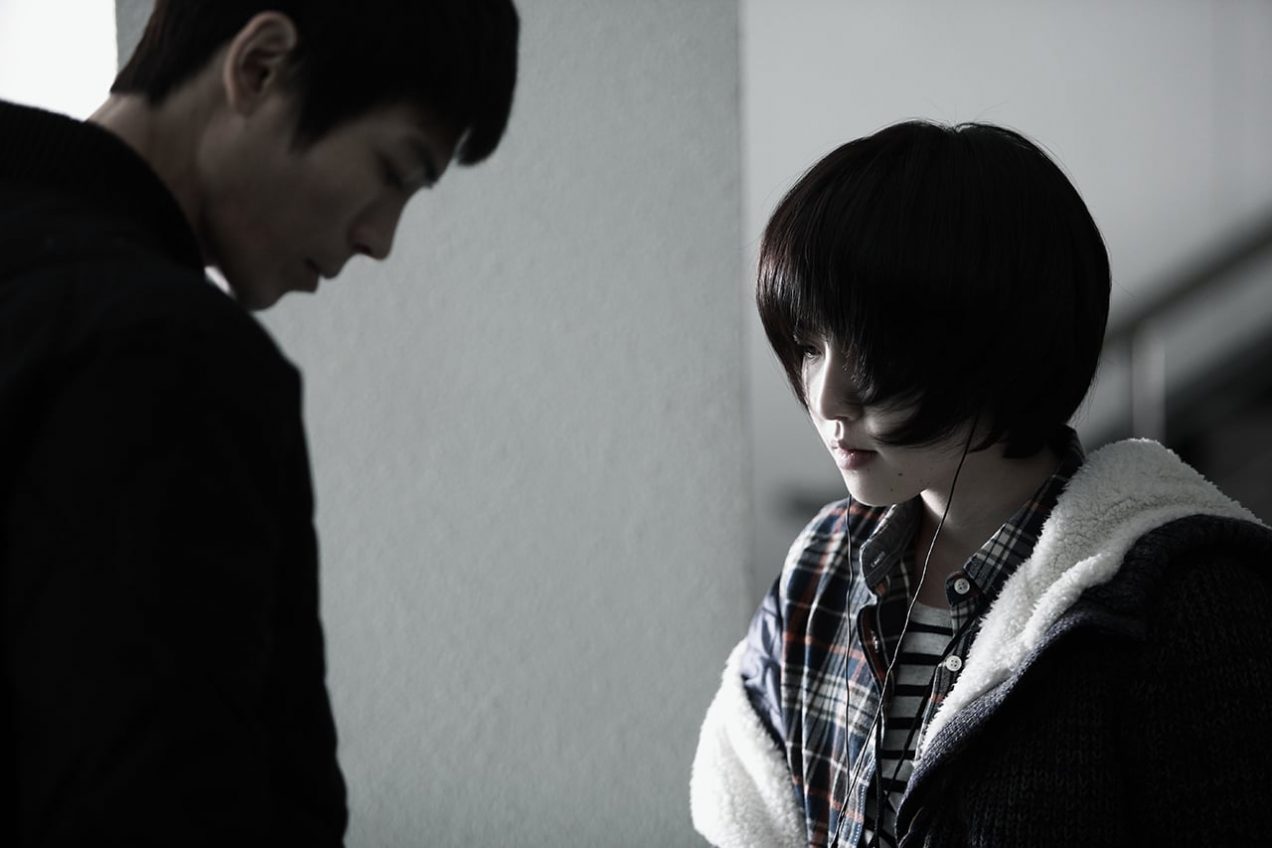 Best known for her comedy roles in the likes of Miss Granny and Sunny, Korean actress Shim Eun-kyung tries her hand at something very different in screenwriter Mo Hong-jin’s directorial debut Missing You. While its English title may suggest a sappy romance (its translated title, Waiting for You, is somewhat more fitting), the film is in fact a dark and grim serial killer drama, with Shim playing a young woman plotting violent revenge on the man who murdered her father.

The film opens with a young girl called Hee-joo suffering the trauma of her Police Chief father being killed by the singularly nasty Ki-bum (Kim Sung-oh, The Man from Nowhere), a homicidal madman with a list of seven apparent victims. Despite the best efforts of Detective Dae-young (Yoon Je-moon, The Great Actor), a lack of evidence results in Ki-bum only being convicted of the murder of his girlfriend, receiving a much lighter sentence. The action skips forward 15 years to the time of his release, which coincides with the beginning of series of suspiciously similar killings, giving Dae-young the excuse to get back on his trail. Meanwhile, Hee-joo has been biding her time during his incarceration, and sets in motion a bloody plan of retribution.

For his first outing as director, Mo Hong-jin sticks to what he knows, the film having a number of similarities with Our Town, a serial killer drama which he scripted back in 2007 for helmer Jung Gil-young. With Our Town not being as well-known as it probably deserves to be, this isn’t really much of a criticism, and Missing You shows canny use of the same kind of twists and turns, making up for some of its more credulity-stretching moments with a brisk pace and nicely-timed jolts. Mo does a good job of notching up the tension throughout, and the film’s central mystery as to whether or not Ki-bum has returned to his old ways is milked effectively for maximum suspense. Though a touch convoluted, the script skilfully divides its time between Hee-joo, Ki-bum and Dae-young, and with each being interesting and either damaged and/or dangerous, this helps to keep the viewer guessing and the film manages to work in a few surprises along the way to its grisly conclusion. The film also benefits from a hard edge, Mo working in plenty of gruesome scenes of stabbings and torture, giving it the feel of a particularly brutal game of cat and mouse.

A lot of the attention here will be on Shim Eun-kyung thanks to the actress taking on such a markedly different role, although it’s worth noting that she did appear in a number of genre films earlier in her career, including Possessed and Hansel and Gretel, as well as recently lending her voice talents to Yeon Sang-ho’s fantastic Train to Busan prequel, Seoul Station. Shim is certainly on good form here, succeeding in making Hee-joo sympathetic as well as complicated, no mean feat given that her single minded quest for revenge takes her to some very dark places indeed. Kim Sung-oh is also great value, adding a genuinely creepy air and an evil smirk to the villainous Ki-bum, while at the same time giving him a welcome touch of insecurity and incompetence in a way which almost makes the viewer feel sorry for him at times. Though Dae-young is a fairly typical genre figure, Yoon Je-moon ticks the right boxes as the dogged detective, and the three protagonists have a fun and dramatic dynamic that ominously exudes conflict and points towards a savage reckoning.

Korean cinema is well-known for tales of serial killers and dark revenge, and Missing You is a very worthwhile genre entry, marking a fine debut for Mo Hong-jin. With more than enough macabre shocks and outré revelations, as well as impressive performances from Shim Eun-kyung and Kim Sung-oh, it’s a film which should certainly go down well with fans of the form.

Missing You is available from YesAsia.