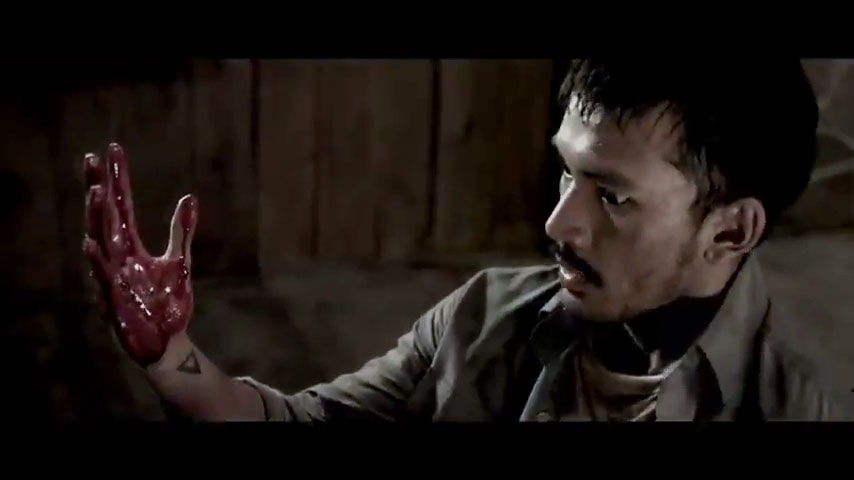 Nothing new here… except don’t move on. A flawed yet undeniably encouraging experiment…

Nothing new to see here… except don’t move on. A flawed yet undeniably encouraging experiment that may succeed as a calling card for a talented director on the cusp of something special.

Stop me when you have heard this one before. A man wakes up in the middle of the night in a shallow grave. He finds himself in the middle of deserted woods. He gets out his mobile phone, and calls for help. Problem is, he realises he has no idea who he is, not even his name. Deciding to get his thoughts together, he comes across a cabin, finding in it a murdered woman and a video tape of her murder. Dragging various clues together he works out she was his wife, and that his two children are somewhere out there in the woods. Desperate to find them, he embarks on a game of cat and mouse with the killer he sees lurking around. He has successes and failures, wins and losses. Until everything changes.

For two thirds of this film, we are in semi-darkness, with the shakey camera voyeuristically following our lead around. We discover clues as he does, and occasionally we get a glimpse of his children out there in the woods. It can be a little drawn out and overlong at times, but we are kept interested by both that threat and the mystery. Then the big twist happens, day breaks, and suddenly we are in a completely different film.

The problem writing this is that whilst any experienced watcher of suspense/horror cinema probably understands the broad gist of the twist, and will have guessed it in about 10 minutes, it is really hard to talk about the film as a whole without giving everything away. However, that final third of the film is something quite different, giving us a brand new set of circumstances, as well as a totally different style to admire. This part is much more colourful and frankly brutal. All the while we are casting our minds back to what went before, joining the dots, suddenly realising what these previous clues meant.

Now director Joko Anwar has been around for a little while, making interesting (the best description I found was someone who called his movies ‘trippy’) films. This one is clearly an attempt to become a name outside of his native Indonesia. The most telling reason for thinking this is the fact the film is done completely in English. Not just the spoken language, but all the visual clues. Anwar has said something along the lines that he wanted it to be in English because he liked the way the F-bomb sounds, but really the wider intentions are clear. For a subtitle savvy watcher like me, this is somewhat unnecessary, and actually causes an issue. The English abilities of the various actors varies widely, overshadowing their performances. Worse still, our lead Rio Dewanto simply struggles to emote in English, sounding like George Takei. It is a shame, because whilst he keeps his mouth shut, he manages to own the movie in all the different situations that his character brings.

The other problem for me is that the film manages to set a situation up, dismantle it, and is able to tie it all together. However, it lacks supplying us a reason for what is going on. I never really understood what drove people to do what they did here, and whilst I am capable of joining the dots, it did make it a somewhat one-note experience.

Technically though, on a budget, the film is great, and manages to illicit primal responses of fear and disgust. There is enjoyment to be had in the puzzle, and the talent being shown is quite obvious. Even if you work out what is going on early on, the film is certainly worth staying with (although I do warn you, the gore isn’t too obvious, but there are upsetting moments), and it has been enough to make me both wish to explore Anwar’s back catalogue, and have some hope that better and bigger things are on the way.

One thought on “Modus Anomali”