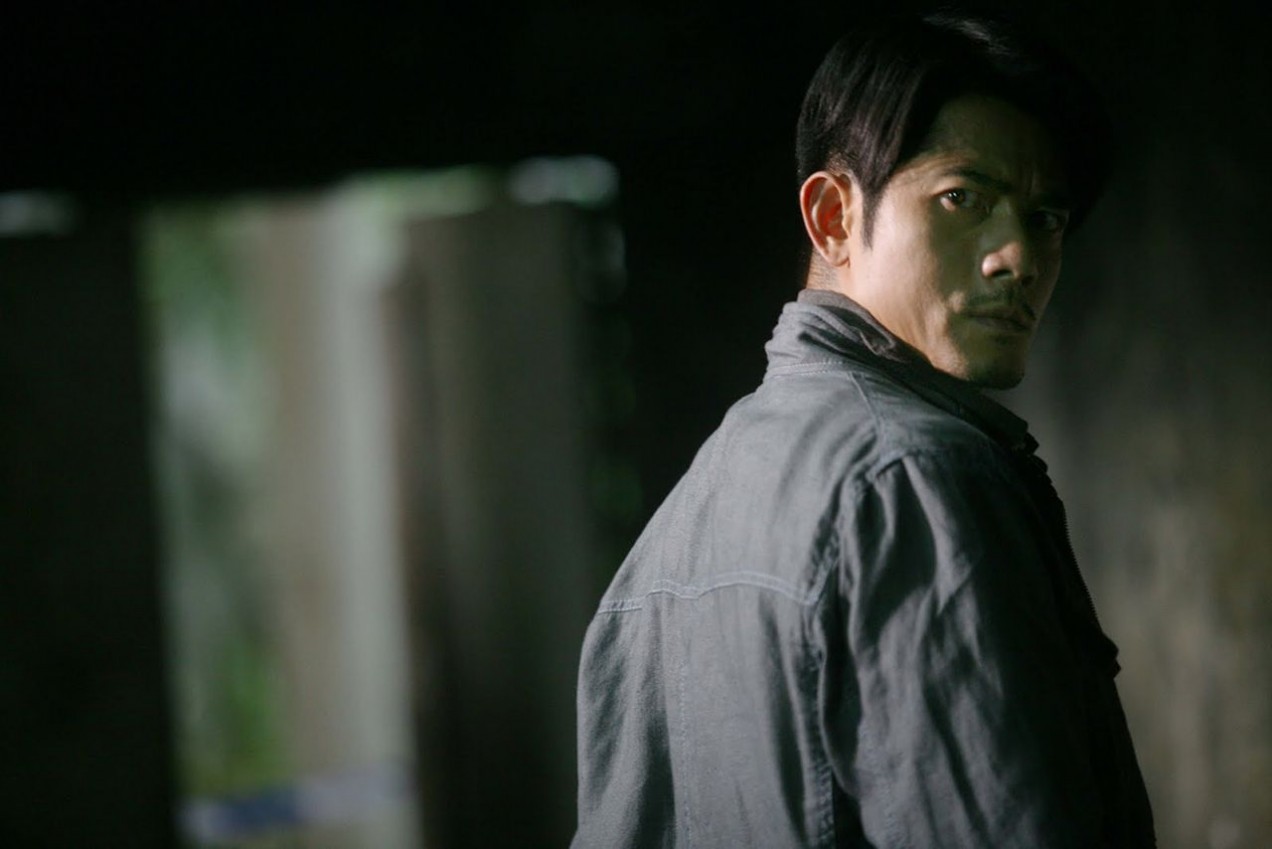 Pretty boy Aaron Kwok stars as Chief Inspector Ling Guang, found unconscious at the site of the work of a serial killer he was investigating whose trademark is to drill hundreds of holes into his victims. Ling wakes not remembering anything about the investigation, and the fact that the latest victim is his superior Tai whom he called to the location starts to through suspicion on him.

Ling can’t help but try and piece together the missing pieces of those weeks, despite his bosses and colleague Ghost’s (Eddie Cheung Siu-Fai, Exiled, Mad Detective, in a superbly understated performance) recommendations that he should spend time with his wife and adopted child. Every time he thinks he gets a lead, it points more closely back to him. Is he going mad? Is he really responsible, or os someone trying to frame him?

It’s hard not to look at the artwork for Murderer and confuse a very harried, manic looking Aaron Kwok for Choi Min-sik in Oldboy. As it happens the film isn’t a pale imitation of a Korean thriller – it’s well paced, nicely atmospherically filmed, and for the main part well-acted with little of the overbearing melodrama of late. It marks the debut of writer/director Row Chow, whose previous credits include crew roles like being assistant director on Lust, Caution.

And a pretty impressive debut it is too, but that comparison to Korean movies comes to the fore in the seeming need from Chow and his co-writer Christine To Chi-Long (Jiang Hu, Fearless) to find a startling revelation for the audience. (Also making it reminiscent of that king of last minute surprises, M. Night Shyamalan.) Now no one’s going to accuse Chow of being unoriginal, but whether you find that revelation at all believable or even just faintly hilarious is another matter.

(And no, I’m not even going to intimate what that is. There are certain things I’d love to discuss in this review but that would just ruin it for you…)

So is it worth waiting for? Well, I’d say yes. It’s a pretty entertaining trip into the ensuing psychosis and paranoia of lead Kwok – by now a dab hand at playing stressed out, obsessed and slightly unhinged police detectives, mainly thanks to roles in Divergence and C+ Detective (aka The Detective), and seems to relish the opportunity. (Though whether it’s deliberate or not, his character becomes a lot less sympathetic towards the end. And I think it is.)

It’s the conclusion, following that earthshaking denouncement, where the piece starts to fall apart, and all too quickly. Even references to Seven (you’ll quickly guess what I’m referring to) can’t save it then! Like those aforementioned Korean movies, Chow is by no means averse to graphic images, from the bone crunching beginning through drills to a plainly yucky use for nails.

Murderer is an impressive and beautifully filmed start for director Row Chow. Let’s just hope he doesn’t follow M. Night Shyamalan and get hung up on last minute revelations…

Good master of the film, and this DVD includes bonus features like trailers, cast profiles, a photo gallery and 'Making of' featurette with English subtitles.