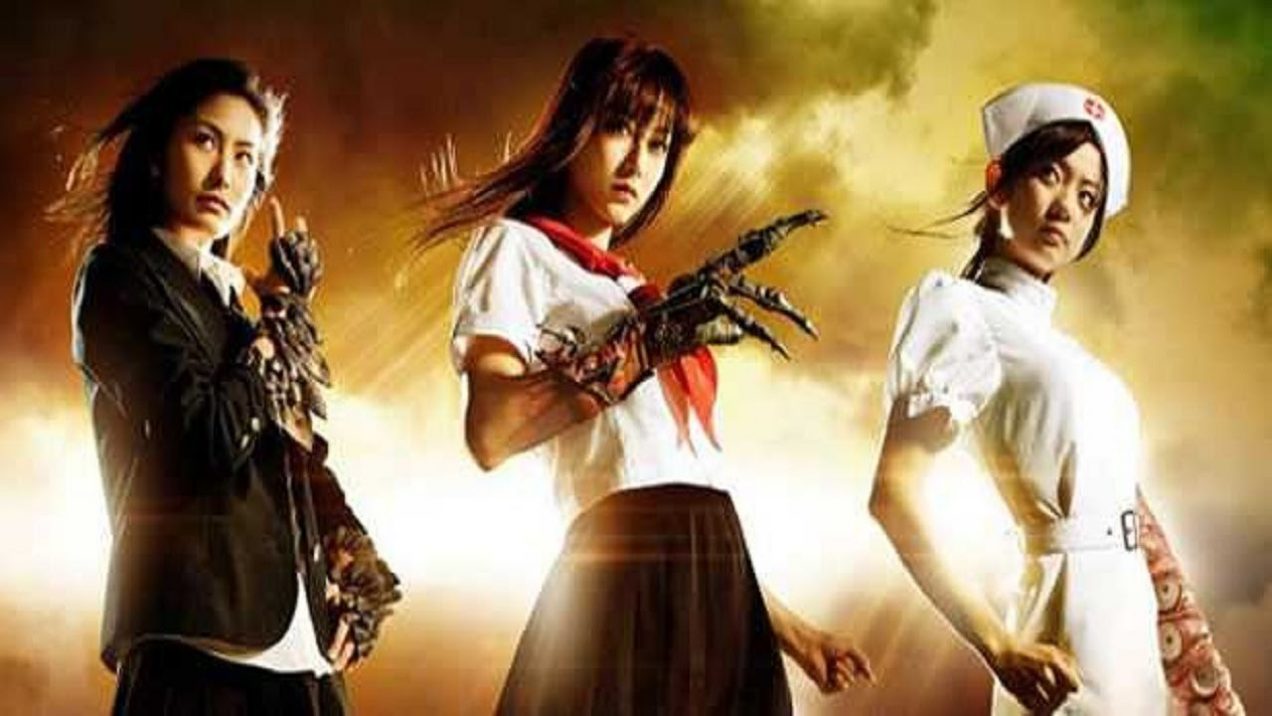 Japanese splatter fans had reason to celebrate back in 2010 with the arrival of Sushi Typhoon’s Mutant Girls Squad, a film which combined the talents of three of the finest (and craziest) directors working in the genre: Noboru Iguchi (Machine Girl), Yoshihiro Nishimura (Tokyo Gore Police) and Tak Sakaguchi (Yakuza Weapon). Playing out like a kind of absurdist, gore-soaked version of X-Men, the film enjoyed a successful run at international festivals, including Stiges, where it won Best Motion Picture in the Midnight X-Treme section.

The film is split into three sections, the first of which is Tak Sakaguchi’s Revelation, with Yumi Sugimoto as Rin, a 15-year-old girl who is bullied at school and suffers from mysterious pains in her arm. Everything changes on her 16th birthday, when her arm suddenly transforms into a vicious looking metallic claw, and her father reveals himself to her as a bizarre mutant with growths on his chest and crotch. After soldiers with machine gun noses turn up at her house and kill her parents, she goes on a bloody rampage through the town before meeting up with another mutant called Rei (Yuko Takayama), whose head and arms are covered with razor-sharp scales. Rei leads her to an underground group of mutants led by the decidedly weird Kisaragi (Tak Sakaguchi), and discovers that she is part of the Hiruko clan, fighting for survival against humankind.

This is followed by Iguchi Noboru’s Revolution, in which Rin and Rei, along with an octopus-tentacled cosplay nurse called Yoshie (Suzuka Morita) are sent on a mission to assassinate a military general who heads up an anti-Hiruko squad. In the process, they come up against a government secret weapon, and Rin comes to realise the insane depths of Kisaragi’s plan, which leads into the final chapter, Yoshihiro Nishimura’s Rebellion.

Even by Sushi Typhoon standards, Mutant Girls Squad is a particularly insane piece of work, and it’s fair to say that it really does feel like the result of a heavy drinking session involving its three directors. It’s almost impossible to do justice to the amazingly creative level of gore and mutant madness on show, and without wishing to spoil any of the berserk surprises in store, the film basically works as a cavalcade of weird imagery and jaw-dropping misuses of the human form, including, but certainly not limited to breast swords, fire-spitting wounds, a grotesque belly dancer, and of course, an ass chainsaw. Punctuated only by moments of low-brow humour and camp melodrama, the well-choreographed carnage really is non-stop, the film spilling an incalculable amount of blood, though as with most of the directors’ works, despite some scenes of degenerate sexuality, there’s nothing truly offensive or mean spirited here – at least for viewers happy to see heads removed and pulverised at a rate of several per minute.

Needless to say, this is all very much par for the Sushi Typhoon course, though what really surprises here is how well the film hangs together. Whereas the premise and the presence of three helmers might well have suggested random tangents and wacky subplots, the film is actually one of the more coherent of its kind, and does, for the most part, make sense. This is of no small benefit, and it lifts the film above some of its more senseless brethren, with a plot which just about manages to hold the action together. Whilst the film is a low budget affair, the production values are also somewhat above average for the form, with some stunningly over the top and imaginative makeup and awesomely impressive splatter.

Mutant Girls Squad really is a simple recommendation – for fans of the form, it’s an absolute must-see, and is definitely one of the best, not to mention the wildest, Japanese splatter-fests of the last decade. Others should probably approach with caution, though any viewers seeking blood geysers, flying body parts and mad but disturbingly cute mutations are unlikely to leave disappointed.