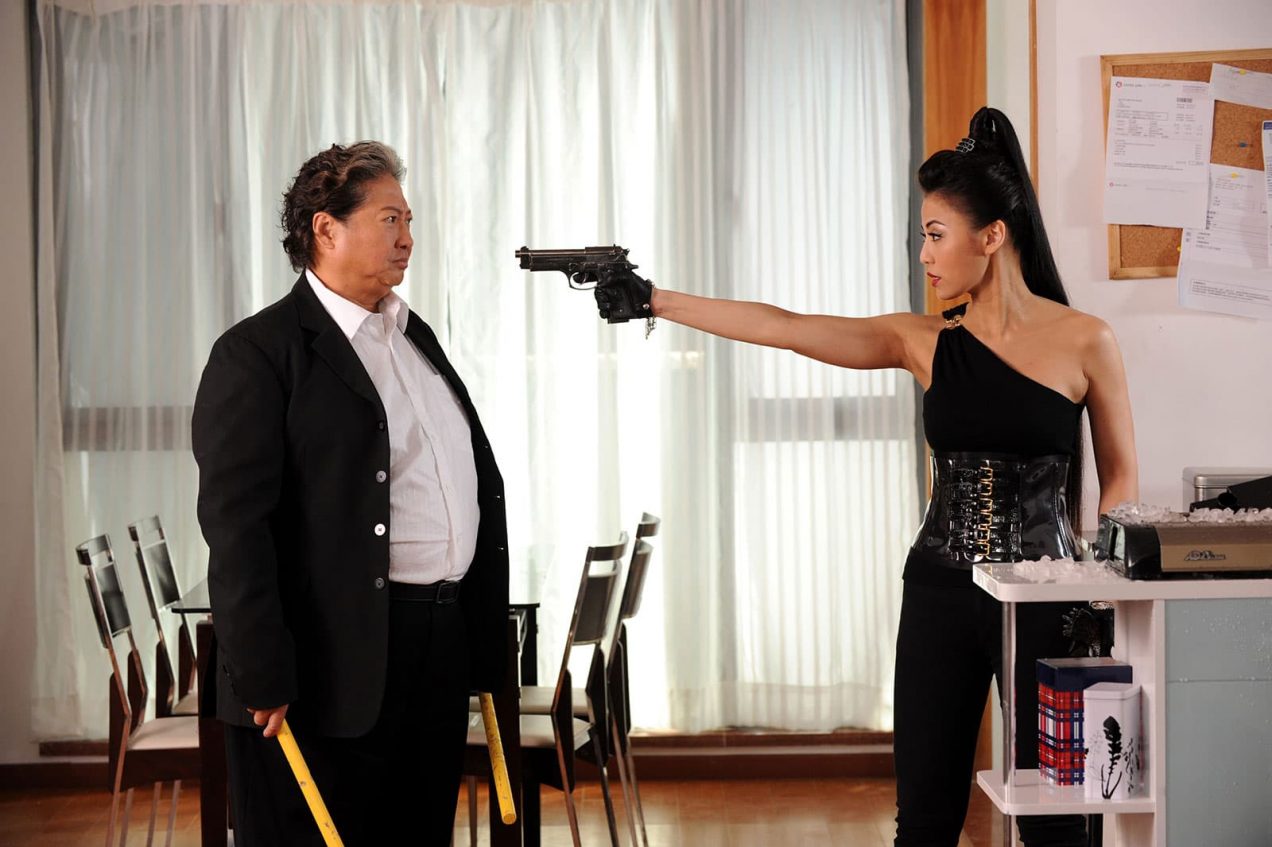 Back in the crazy heyday of Hong Kong cinema, the word ‘naked’ used to appear in film titles a lot, particularly in those produced by schlockmeister Wong Jing. Notable examples of this were the 1992 and 2002 cult favourites Naked Killer and Naked Weapon, both of which revolved around scantily clad (or indeed naked) female assassins, with plenty of blood and bullets thrown in. Forming a loose series of sorts, the two were joined in 2012 by Naked Soldier, again with Wong Jing as writer and producer, and directed by Marco Mak, with industry legends Sammo Hung and Anthony Wong on hand, backed by Jennifer Tse (sister of Nicholas Tse, and who also appeared in Hong Kong Ghost Stories and Bruce Lee, My Brother around the same time) in the title role, and a solid supporting cast that includes Andy On, Philip Ng and Ellen Chan (star of many a classic Hong Kong sleaze-fest, notably the amazing Eternal Evil of Asia).

The film kicks off in 1980 with Sammo as Interpol agent Lung, taking a trip to the states after successfully pulling off a massive drugs bust. Unfortunately for him, the drug cartel decides to take revenge, the evil Brother Power (Anthony Wong) ordering Madame Rose (Ellen Chan) to wipe out his whole family. Lung survives, along with his five year old daughter Wen Ching, who Madame Rose kidnaps and brainwashes, training her to be a ruthless assassin. Skip forward to 1995, and Wen Ching is now Phoenix (Jennifer Tse), completely unaware of her true identity, juggling her civilian façade as a college student while carrying out assignments and dealing with the attentions of earnest cop Sam (Andy On). As part of a scheme to take over the drugs empire herself, Madame Rose sends Phoenix to kill Lung, whose investigations have been bringing him closer to the truth.

In the time between Naked Soldier and the previous Naked films, there’d been a marked shift in the Hong Kong film industry, with the eyes of most moving to focus firmly on suitability for Mainland audiences and censors. As such, it shouldn’t come as too much of a surprise to learn that there isn’t actually any nakedness in Naked Solider at all, nor indeed any of the sleaze or lurid elements which were pretty much the raison d’être for the previous instalments. Though this might understandably be a downer for fans looking for full-on Category III-rated exploitation, the film is thankfully still enough of an old school throwback to entertain, with plenty of old fashioned trashy fun. The action quotient is also respectably high, with Corey Yuen’s choreography and Marco Mak’s penchant for quick fire editing making for some reasonably wild set pieces, enlivened here and there by some spectacular bursts of CGI blood and the efforts of Andy On and Philip Ng. While none of this is really outstanding, it’s all perfectly entertaining, and carried out with a certain amount of clumsy flair in the style of the genre’s halcyon days.

Where the film does score highly and recalls its predecessors is in terms of nonsense, packing in a good number of bafflingly daft moments and generally showing a pleasing refusal to take itself seriously. This can be seen in a variety of different ways, chief amongst which is the film’s many odd shifts in tone, summed up by its shocking opening scene of the over the top and bloody massacre of Lung’s family, which is shortly followed by some light-hearted comedy. The film also wins extra points for some of the most bizarre costumes and fashion seen on Hong Kong screens since the 1990s, with most characters being clad in bright and flamboyant garb that’s clearly in no way practical for covert assassinations or martial arts duelling. Though Jennifer Tse doesn’t bring much to the table and Sammo is left largely in the background, the performances of certain cast members also help to boost the entertainment factor, including Ian Powers (Future X-Cops) and Jiang Luxia (Vampire Warriors) as a couple of semi-offensive gay stereotype fighters, and the one and only Anthony Wong, in full-on pantomime villain mode and effortlessly stealing every scene he shows up in.

This all makes Naked Soldier a lot of fun, at least for those with a taste for this kind of old fashioned silliness, and there are few dull moments during its short and fast-moving running time. At least partly making up for its lack of actual nakedness through its cheerful lack of pretentiousness or fashion sense, there’s plenty here to enjoy for those with appropriately adjusted expectations.