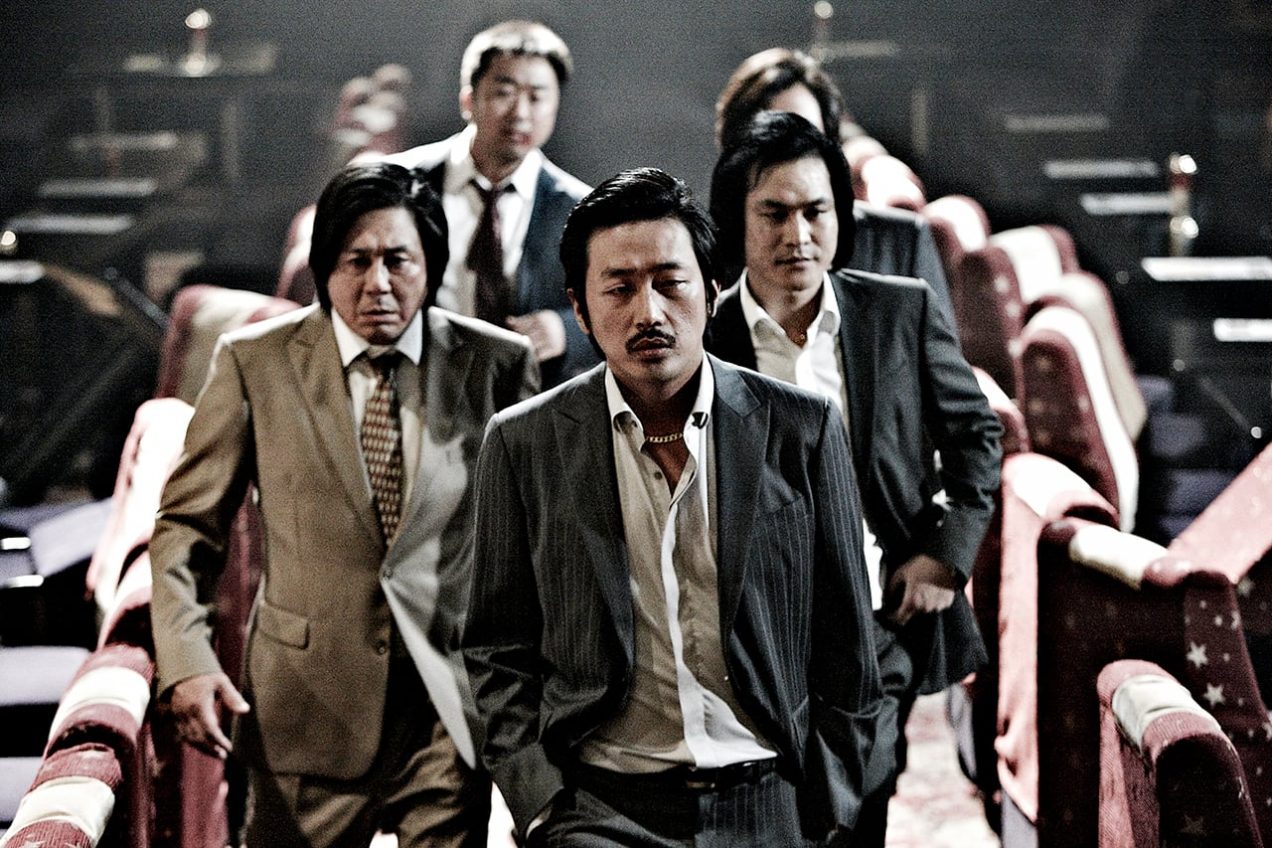 Nameless Gangster charts the rise and inevitable fall of corrupt customs official Choi Ik-hyun (Choi Min-sik, Oldboy, I Saw The Devil, Chihwaseon) through the 80s; from his association with local gangster Choi Hyung-bae (Ha Jeong-woo, The Chaser, The Yellow Sea, Love Fiction, My Dear Enemy) to building an empire together on nightclub-protection racketeering and running a casino.

Hilariously Ik-hyun seems to have relatives everywhere, using his in-depth knowledge of the Choi clan to the pair’s advantage. But it seems no sooner have they achieved their goal, even linking up with Japanese Yakuza, that their association begins to fall apart…

Director Yun Jong-bin’s (The Unforgiven, Moonlight Of Seoul aka Beastie Boys) fictional biopic owes much to the work of Francis Ford Coppola and Martin Scorsese, particularly Scorsese’s Goodfellas and Casino for obvious reasons. There’s even a sly reference, with Ik-hyun talking to himself, gun in hand, De Niro style. But for Yun this is more about satire both on the changing political climate of the time, leading up to President Roh Tae-woo’s declared crackdown on organized crime, as it is a tongue-in-cheek attack on nepotism and cronyism, and an indictment of how things really don’t change.

Humour is Yun’s device for getting this across, mainly due to an exemplary performance by Choi Min-sik as the very worst in bureaucratic corruption, bumbling into gangster life without truly realising its dangerous implications. He simpers, wines and pleads, an irredeemable and unsympathetic character that, in other hands, could so easily irritate – yet here is still likable.

Sure, there are echoes of his character as we initially meet him in Oldboy, the down-at-heels boxer in Crying Fist, of the badly behaving artist Jang Seung-up in Chihwaseon; but this is another career-defining role for him. As one of the biggest successes of the year it’s undoubtedly put him back into the hearts of Korean audiences after his self-imposed exile and lukewarm reactions to Kim Jee-woon’s I Saw The Devil.

I have to admit to being blown away by Ha Jeong-woo’s performance though, almost unrecognisable as Hyung-bae. His presence and even gait embodies that of a violent gangster who – though we rarely see it – really has no qualms about how far he needs to go to keep control.

His third film with Yun, the pair seem to have developed a relationship that allows Ha to genuinely show his skills as an actor; perhaps more so than his work with Na Hong-jin. This film defines Ha as a great character actor, and a more convincing one than he is a romantic lead.

But this is a two-horse race, with other characters rarely getting a look in. It’s notable how little importance women have in this (admittedly masculine) world. Even Ik-hyun’s wife is hardly seen during the entire movie. Just as well the leads are so damn good…

Yun shows great confidence in the direction of his third movie. Sure, this might not be adventurous by any means, but then that would only get in the way of the lead performances. It’s well composed, with a keen eye for period detail – even if that detail often smirks at the worst excesses of the 80s in much the same way Sunny did (bad haircuts, fashion, pop acts, etc).

Yun manages to cut that fine line between humour and real violence well, as the film inevitably turns darker when things fall apart. It’s only the opening minutes of the film, where Yun packs in so much background information and sets up his timelines, that even he seems a little overwhelmed by it all.

Nameless Gangster is a superb piece of cinematic entertainment. Unmissable.

Nameless Gangster: The Rules Of Time will play at this years London Film Festival.