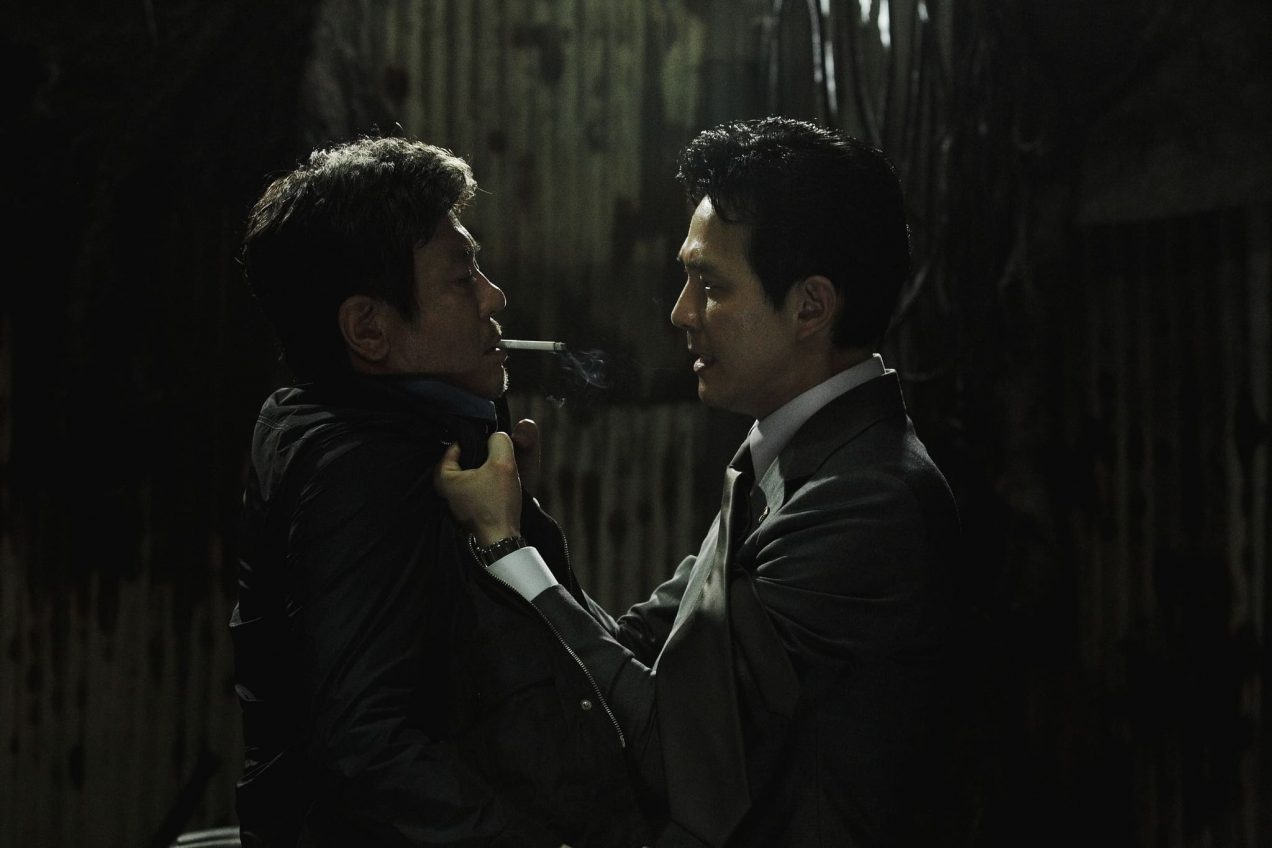 We probably walked on Earth unaware of being huge Park Hoon-jung’s fans. How else could we describe ourselves when discussing the screenwriter behind Kim Jee-woon’s I Saw the Devil and Ryoo Seung-wan’s The Unjust? He’s been on the desk writing two fantastic movies, one of which is surely among the best ever written (and acted, directed, etc.) in the recent history of South Korean cinema.

Both were good enough reasons to nail our hype on the peak of Mount Everest as soon as Park Hoon-jung’s sat on the director’s chair. Sadly, his directorial debut, The Showdown, was far from exciting, but sufficient to get him a second chance behind the camera and gather a tremendous cast for a gangster movie in 2013, now grown to boast his own, maybe not all deserved, cult status: New World.

Lee Ja-sung (Lee Jung-jae, Assassination, Il Mare) is Jung Chun’s (Hwang Jung-min, Veteran, Battleship Island) right hand, one of the two men next in line for the Chairman position at Goldmoon International, a corporation run by crime lords suddenly beheaded of its former boss, Seok Dong-chool (a brief appearance for Lee Geung-young, The Terror Live, Inside Men), killed in a car accident.

Goliardic and messy Jung Chun could be the one to grab the spotlight, but he is set against the powerful and violent Lee Joong-gu (Park Sung-woong, The Deal, The Swindlers), ready to throw anything against his opponent. What both parties do not know is that Lee Ja-sung is an undercover agent working for the “infamous” police chief Kang Hyung-cheol (Choi Min-sik, The Tiger, Roaring Currents).

Eight years hidden among Goldmoon International ranks, Lee Ja-sung worked his way up side by side with Jung Chun, unknowingly escorted by a cop, a role he should abandon as soon as Seok was arrested. But death came in the way and Kang and Police Director Ko (Joo Jin-mo, A Violent Prosecutor, Kundo: Age of the Rampant) decided to strike one last attack at Goldmoon, breaking the promise made to Lee Ja-sung to free him somewhere in a foreign country to live his own life.

One more week, one more month, Lee Ja-sung will have to keep hiding and wait for his future son as a gangster for an unknown time with one precise mission: support his boss Jung Chun in the race and stop Lee Joong-gu from winning. Best case scenario, they all go to prison, but Goldmoon is in turmoil and many undercover agents have been discovered, leaving Lee Ja-sung’s in the hottest spot.

New World has a thick plot and complex characters to manage, an adventure a veteran director could think of as a challenge. Nonetheless, Park Hoon-jung, despite his inexperience, is able to cope with his own screenplay in the smoothest way possible, surely thanks to New World ancestors who walked the same path, whom footsteps can be followed without hesitation or any chance to make mistakes.

Park Hoon-jung has a string of almost flawless South Korean gangster movies behind him, Nameless Gangsters and A Dirty Carnival being two of my favourite examples of such a great tradition, but his New World, while still hoping to live among them, has huge ambitions, drawing inspiration from Hong Kong masters such as Johnnie To (Election), John Woo (Hard Boiled), Alan Mak & Felix Chong (Infernal Affairs) and, maybe, even Takeshi Kitano and the Japanese yakuza films.

He has plenty to look up to and many scenes in New World betray Park’s moviegoer habits. He has studied the frames between the action scenes and snatched everything useful for the job he’s the best at, shaping characters. Their motives and personalities are fixed points for Park Hoon-jung’s lenses, captivating objects producing much more tension and anxiety than any action sequences featured in the film.

All of it revolves around Lee Ja-sung’s destiny and hard choices, at least those rare occasions in which he has an actual voice in his line of duty, trembling more and more as the race between Lee Joong-gu and Jung Chun escalates towards the expected bitter end, designed to increment the number of unsettling close-ups, building up to a confrontation everyone could see coming, but hoped not to witness.

Could New World have been much better than this? Absolutely. Park Hoon-jung’s exploited all his screenwriting superpowers, but his directing ideas in 2013 were still young and voided of any originality or beauty. A disadvantage that would highlight how well New World would have worked as a Tv show, with its focus on the actor’s faces and linear storytelling sure it could have been a success.

Question is: where would have anyone found a cast as godly as this one? Lee Jung-jae, Hwang Jung-min and Park Sung-woong are simply fantastic, even more than the gigantic Choi Min-sik, not in his usual magnificent form (he will make up for it with Park Hoon-jung’s next film, The Tiger: An Old Hunter’s Tale and Kim Han-min’s outstanding blockbuster The Admiral: Roaring Currents). It is thanks to them and to Park’s writing that New World doesn’t have a dull moment.

New World is out now on UK Dual Format from Eureka Entertainment.