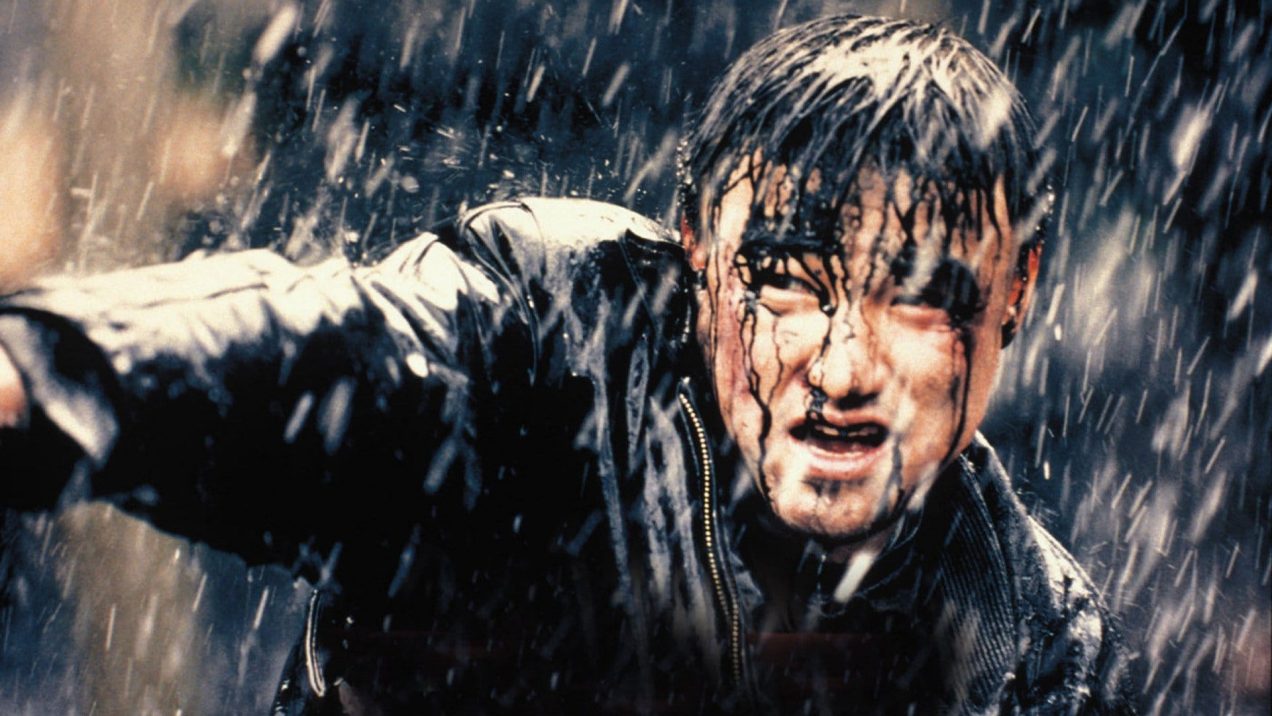 We revisit Lee Myung-se’s classic police thriller, for many of us the first Korean film we saw…

Watching Nowhere To Hide again more than a decade since it was first released in the UK, it still seems so fresh. It’s easy to see why it had the impact it did, and even why certain comparisons where made – but was it ever really an ‘action’ film…?

Detectives Woo (Park Joong-hoon, Haeundae, Hanji, Les Formidables) and Kim (Jang Dong-gun, Typhoon, The Promise, The Coast Guard) head up a homicide squad given the case of tracking down the murderer of drug boss (in a fleeting cameo from Song Yeong-chang, The Foul King, The Man From Nowhere, Thirst, The Good, the Bad, the Weird) in broad daylight.

Very much from the intimidation school of police methods, Woo soon discovers the perpetrator is Chang Sungmin (Ahn Seong-gi, Musa, Chihwaseon, Duelist, A Battle of Wits, The Housemaid) – but catching him is going to be a whole different matter, as he evades the squad at every turn.

Nowhere To Hide became the first Korean film to get released on DVD, heralding the so-called ‘new wave’ that would introduce the work of directors like Park Chan-wook, Kang Je-gyu, Kim Jee-woon and Kim Ki-duk to international audiences. The freeing up of censorship and support from the government led to an incredible explosion of creativity that finally put South Korea on the global filmmaking map. Now looking at all those films made during that time – from 1998 and 2001, when Nowhere To Hide was originally released in the UK – it seems like such an incredible output.

Lee Myung-se’s film is full of ideas from the very start. Shooting partly in black & white, full of film references from Man Ray, silents and German expressionism to Italian neorealist, spaghetti westerns and Fellini – at points the squad run around like a cross between a manga and the Keystone Cops – they never interrupt the narrative, even if they do bring a great amount of style. Like me, you might notice those references, particularly on a second or third viewing, but they’re not obvious or distracting. Every moment seems painstakingly considered and composed, with nothing left to chance or improvised.

To say Myung-se love’s the use of slow-motion is something of an understatement. He wallows in it in a way rarely seen outside of Kuei Chih-hung’s penultimate sequence in Big Brother Cheng, layering long transitions upon transitions as movement flows onscreen. Coming when it did, you can understand why comparisons where made – the UK DVD heralded quotes like ‘Is Hollywood ready for the next John Woo’ and ‘A sure-fire hit with fans of Hard Boiled’ – but those comparisons never fitted with Myung-se’s work.

With hindsight one can see why: Nowhere To Hide was Myung-se’s first action film, having directed comedies and romances up until that point, and even then the ‘action’ tag only fits loosely. Woo’s action heroes are superhuman, capable of incredible feats beyond it’s audience, where Myung-se’s heroes are rather more normal. There are no crazy acrobatics, and what choreography there is is far more about movement. Simply put, Woo celebrate’s action cinema in it’s full exploding glory, whereas Myung-se’s work is far more a celebration of cinema in general. Of the techniques and the vision.

Compare for instance the Pang Brothers assassin flick, Bangkok Dangerous, also originally released in 1999. Part homage to John Woo and Ringo Lam, like Nowhere To Hide it’s full of different visual ideas and techniques. Again there are black & white and highly stylised sequences, but the action and pretexts in Dangerous are far more deliberately ‘clever’ and spectacular in true meaning of the word, particularly with scenes like the (literal) trick shot on the HK underground train.

All of which makes Myung-se’s continuing synonymy with the action genre, underlined by his upcoming Mister K, a Bond style action film, something of a cruel irony.

At points he seems so well versed in cinema, you wonder how someone that has said they didn’t have access to many films growing up and in film school can have so much knowledge. It’s not unlike the early work of DePalma or Scorsese in that sense. There’s a sense of ‘B movie’ subject matter given ‘A movie’ quality and scope.

Equally striking was his bold and adventurous use of music, often using dance or Western songs. At that point it was still pretty unusual in Asian film, outside of rare examples like Lam’s Full Contact, though you can’t help feeling Kim Jee-woon took notice when he came to make The Foul King.

Perhaps the most powerful use of sound comes when Sungmin unexpectedly turns up back at the apartment of his girlfriend: throwing the police squad into a slow motion panic as they try to keep themselves hidden, it’s played against just the sound of a steaming kettle.

In terms of narrative, like Duelist it seems like more of a comedy for the first half before the tone turns darker. (Indeed, wrapped around a plot involving police detectives trying to track down a murder, Duelist always felt too close – even if it had been relocated in time.)

Myung-se is intent on showing us just how much Woo is giving up to be a police officer, a wife and family, as well as risking his life. But as he invades the life of Sungmin’s girlfriend, he inadvertently he raises an interesting morale question that we’ve still to come to terms with, just how far is it acceptable to go to catch the perpetrator.

There’s no doubting Myung-se’s style still holds it’s ground a decade on – Nowhere To Hide is a real Korean classic!

A solid release of the film includes minor extras such as Star And Director Filmographies, a Nowhere To Hide Screensaver, Roger Clarke Film Notes and the Original (American?) Theatrical Trailer.

The picture is good and crisp, but not quite as sharp or as detailed as would do the film proper justice.

Amazingly, the original Tartan DVD release is available from retailers like Amazon – and at not a largely inflated price! However, with Mister K on the horizon and few decent versions available across the world, perhaps the time is right for a new release?