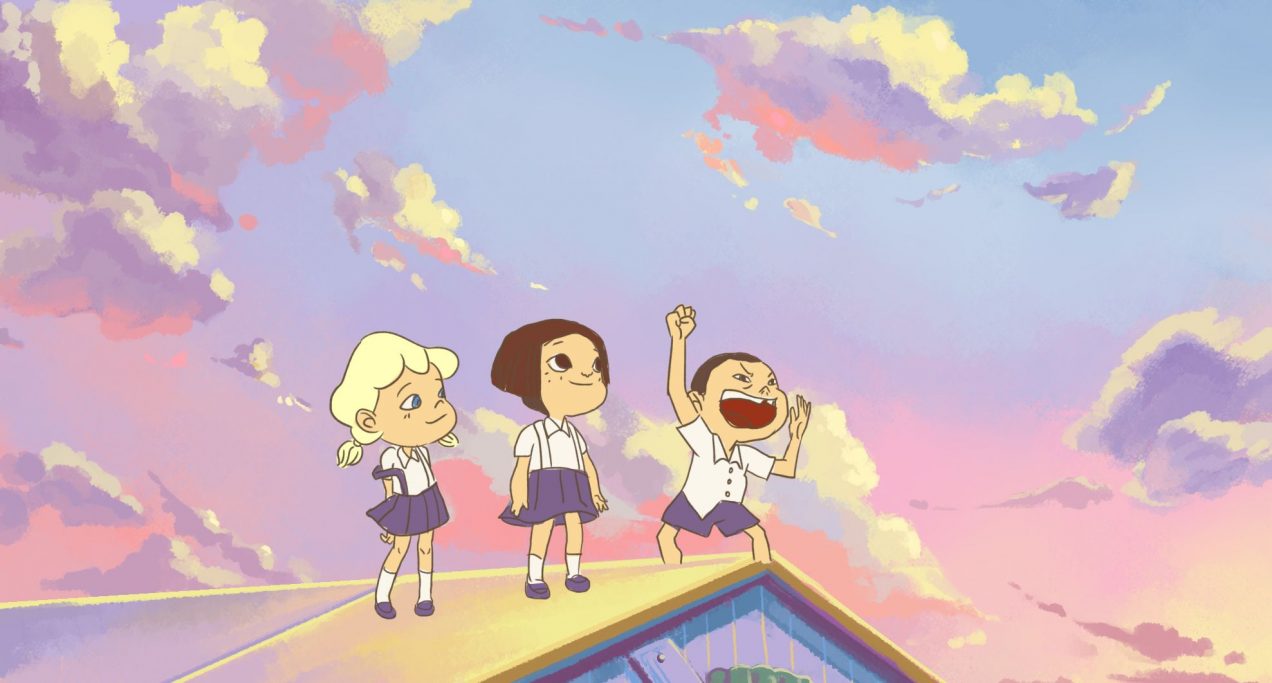 Hsin Yin Sung’s On Happiness Road centres around the character of Lin Shu-Chi as she returns to her hometown in Taiwan. The trailer asks, ‘have you become the adult of your dreams?’ and the film’s touching collage of past and present serves to both ask and answer this question.

Opening in Lin Shu-Chi’s childhood, she is bursting with playful innocence and the animation takes us with her on her flights of fantasy. Cut to the now thirty-something Shu-Chi who is married, living in the U.S. and her childhood exuberance has faded into dissatisfaction. The sudden news of her grandmother’s death triggers a crisis of reflection and the film flits between her adulthood, childhood and fantasy. The whimsical animation style lends itself to the non-linear timeline and to the nostalgia at the heart of the story. She becomes increasingly aware of how her adult life has diverged from the dreams she had for herself as a child. The dreams Shu-Chi’s parents had for her and for their own lives also weigh heavily on Shu-Chi’s mind. Despite the deep musings on strained family relationships and dissatisfaction, the film has an optimistic and light-hearted spirit.

One of the strengths of the film is that it manages to be very culturally specific and yet universal at the same time. For example, one of the most interesting recurring issues is that of cultural discrimination. For example, Shu-Chi’s childhood best-friend, Chuang Betty, is the blonde daughter of an American soldier. Even though she has only ever lived in Taiwan, Betty and her children get called Americans. Also, classroom scenes also show the children being banned from speaking Min Nan and made to learn Mandarin. Although apparently Taiwan-specific, the universal relevance of the social issues of in the film is effortlessly apparent.

Despite the intelligence and richly drawn characters, more fantastical elements of the film can sometimes overwhelm and stall the thoughtful reflection. This is particularly noticeable in the childhood segments as Shu-Chi moves more easily in between fantasy and reality. Sometimes these segments feel more like a fun animation break rather than a moment conducive to the plot and can even be a little confusing. The character of the dead grandmother appearing to Shu-Chi is charming but feels extraneous as the grandmother is neither part of Shu-Chi’s childhood imaginings or recollections. There is plenty of fantasy in the film that works but there are definitely moments where it goes overboard and distracts from the delicate nostalgia and characters.

The characters are mostly able to shine through this obstruction, largely due to the successful voice acting throughout. Lun-Mei Kwei and Bella Wu as the adult and child Shu-Chi (respectively) carry the film and allow the audience to feel like they really know and understand the central character. Two other stand-out performances come from Bor Yeng Chen and Hui-Jen Liao as Shu-Chi’s parents. Considering that for large portions of their screen time they are putting pressure on Shu-Chi and bickering, the actors still manage to imbue the characters with sensitivity and a relatable inner-life. Other notable supporting voices are Shu-Chi’s childhood friends voiced by Penny Huang and Alan Hsu.

Overall, On Happiness Road succeeds in being both light and fun while also tackling deep and thought-provoking issues. A more measured approach to the whimsy would have definitely improved the film but the poignancy of the reflections on both childhood and adulthood make it well worth a watch.

Stella Frangleton
Suffolk native, discovered horror and Asian cinema at a young age and never looked back. Currently working at an independent cinema and trying to squeeze in as much film festival fun around walking the dog and patting the cats.
Read all posts by Stella Frangleton