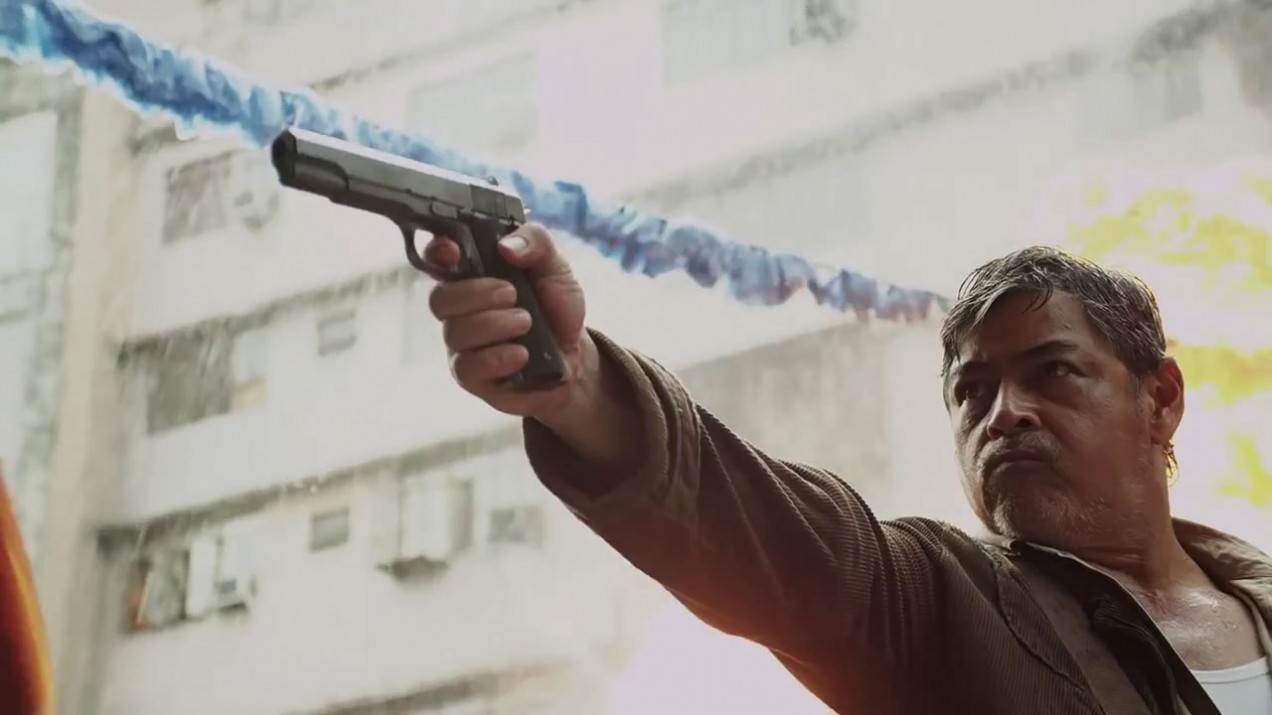 Eric Matti directs an inventive and steadily engaging thriller, with a US remake already on the cards…

Inmates Tatang (Joel Torre, Oro, Plata, Mata, José Rizal, Tanging Yaman, The Bourne Legacy) and Daniel (Gerald Anderson, Sana Maulit Muli, My Girl, Tayong Dalawa, Kung Tayo’y Magkakalayo) have a neat sideline in making money during their incarceration: carrying out government sanctioned hits for an administration so rife with corruption that no one can be trusted. Regularly granted temporary release from prison under the seemingly innocent guise of performing handyman duties for their warden, they are in fact discharged into the hands of boss Thelma (Vivian Velez, Ang Babaing Hinugot Sa Aking Tadyang, Kasalanan Bang Sambahin Ka?, Paradise Inn), who allocates their duties.

As Tatang’s imminent release threatens to bring an end to his livelihood, he begins to guide his apprentice Daniel so that he can truly fill his shoes when he leaves. Meanwhile the investigation of their last hit has been assigned to ambitious NIB Agent Coronel (Piolo Pascual, Paano Kita Iibigin, Don’t Give Up on Us, Milan, Dekada ’70), who soon begins to realise how deeply involved the government are, including his father-in-law Congressman Manrique (Michael de Mesa, D’ Kilabots Pogi Brothers Weh?!, Mulawin). Torn between family and duty, Coronel turns to 20-year old police veteran Sgt. Acosta (Joey Marquez, Tik Tik: The Aswang Chronicles, Palibhasa Lalake, Girl, Boy, Bakla, Tomboy, I Wanna Be Happy), but just who can be trusted?

Based on real events in Manila, director Erik Matti (Tik Tik: The Aswang Chronicles, Gagamboy) avoids the straightforward action thriller for a narrative with more emotional depth. Drawing on the father/son mentorship of Tatang and Daniel, Matti builds a sympathetic picture of this ruthless killer and his protégé. Tatang is a family man, supporting his wife, putting his daughter (unaware that he is in prison, not just away working) through law school. It’s Joel Torre’s very human, seemingly venerable portrayal of this figure that effectively fools you into believing this guise, before the mask ultimately falls. In sharp contrast, Piolo Pascual’s character seems arrogant, ruthless and as potentially as corrupt as those around him.

There’s an irreverent feel to how Matti approaches the first half; the narrative feels perhaps messy as he chops between the protagonists; the connections loose and untied; the subject matter dealt with a light, almost humorous approach. That’s false, of course, as film steadily engages with you at a comfortable pace. It’s with the pivotal scene in the hospital Matti shows full control, finally revealing the films structure and quite literally bringing his participants and the strands of the film together in a tightly edited, tense confrontation that draws it all towards a darker second half. There’s more than a touch of the relationship between Charles Bronson and Jan-Michael Vincent in The Mechanic, as distrust grows between mentor and pupil. Matti’s success lies in pulling the rug from under us, and swapping our sympathies completely by the final reel, as Tatang’s true ruthlessness is exposed.

The corruption at the films core are inspired by several real events that Matti seems to shrug off as great source material. The same is true of audiences back in the Philippines, who seem not to associate themselves with the scandalous and worrying incidents. Indeed, it’s the strength of the cast’s performances that make the drama work on a far more personal level, and characters you care about. Ricardo III Buhay’s cinematography paints a thriving, visceral picture of the seedier side of Manila’s streets, often interjected with tropical rain, while the soundtrack by Erwin Romulo constantly ripples below the surface with a funky retro style that pays reference to the thrillers of the 70s.

Invited to screen at the Director’s Fortnight in Cannes in 2013, the film received a two-minute standing ovation and acclaim that brought it to the attention of international buyers. Its crossover potential has already been targeted for a US remake, reported to be helmed by 2 Guns and Contraband director Baltasar Kormákur. But we don’t have to tell you that you should check out the original first…

On The Job screened as the opening film of Terracotta Far East Film Festival, as part of a special spotlight on the Philippines. It will be released by eOne later in the year.