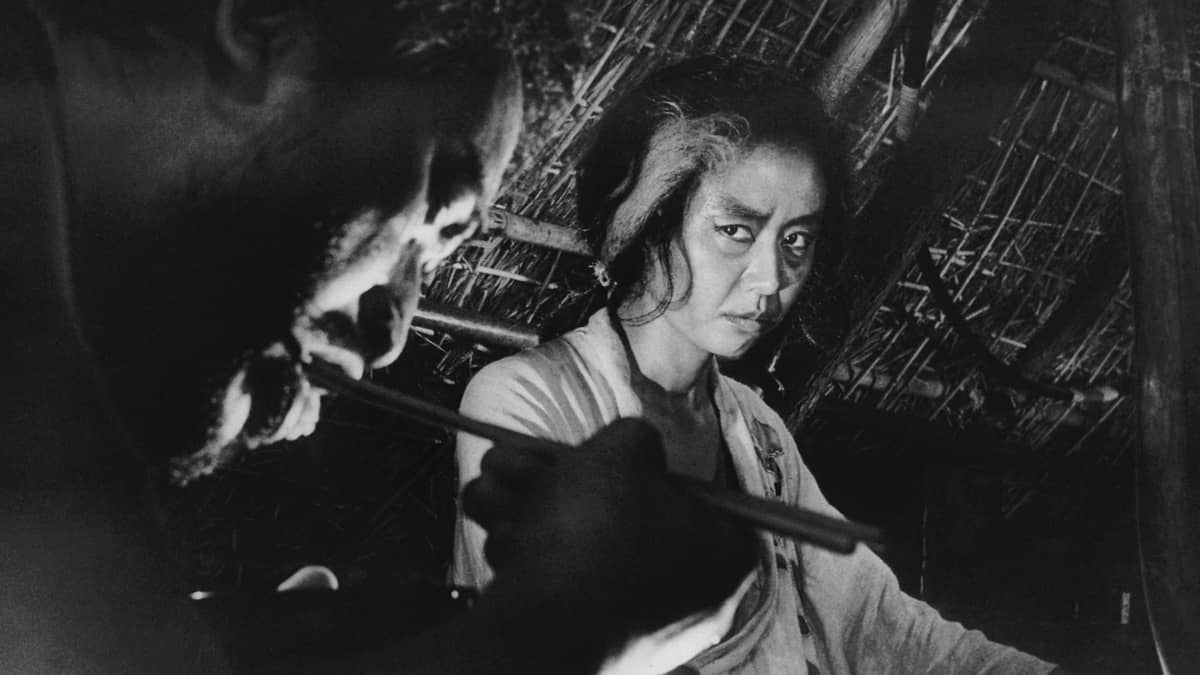 The film has barely started, and the spectator is already facing a sensory overload triggered by intense Taiko drumming combined with jazz, and highly-contrasted black & white scenes of wind-blown susuki fields. Repeatedly referred to as one of the best horror films to ever hail from Japan, Onibaba, literally translated to Demon Hag, is a timeless tale of jealousy and lust with an emotional reach rarely attained by films so deeply rooted in specific sociocultural traditions. Overly theatrical acting and crude, cringe-worthy Freudian references aside, Onibaba is the aged sake of Japanese cinema from the mid-60s. The product of Hiroshima-born Kaneto Shindo’s (The Naked Island, Kuroneko) mind, this film is still rightfully remembered as the sensually disorienting masterpiece of one of the most celebrated and highly-prolific Japanese auteurs of the 20th century.

Not a conventional horror story by any means, Shindo’s Onibaba was inspired by the Shin Buddhist parable of yome-odoshi-no men (bride-scaring mask) and niku-zuki-no-men (mask with flesh attached). Set in war-torn 14th century Japan, the narrative follows what ensues once a neighbour of two peasant women returns from war and informs them their son and husband has passed away. It doesn’t take long after the discovery of this tragic event that a sexual relationship between the neighbour and the younger woman begins, to the dismay of the older woman. Initially, one is led to believe her dissatisfaction is caused by the shortness of her grieving period but it soon becomes evident that this distress is coming from a much more selfish place. She both fears being abandoned by the younger girl and resents not being the object of desire.

Onibaba’s narrative is deeply moralistic at its core and it’s easy to see why all characters end up “getting what they deserve” for their dubious deeds. Surviving on the basis of killing lost samurais and selling their armour, the two female lead characters are no examples of moral virtue at the very start of the story but despite their misery, they live a satisfactory life where meeting primal needs (sleep and food) overwhelm all else. When a man enters their social world and adds sexual desire as a third need, they’re faced with a situation they don’t know how to adequately tackle. The parallelism between these desires in how greatly they determine behaviour is made clear by Shindo in his portrayal of how eagerly these desires are met as well as the frustration that derives from not being able to meet them.

After killing a lost samurai, throwing him into a well-shaped hole and going inside it to steal his devil mask (representing a jealous female demon in Noh theatre), the older woman prompts the start of true horror in the film. She proceeds to use this mask to scare the younger woman and persuade her she is being haunted for her sexual escapades with the neighbour. Punished for her evil intents by a mysterious force, the old woman finds herself incapable of removing the mask. As contemptible as her past behaviour might have been, her sinful actions were not done in malice but rather as a way to survive. It is when her intentions turn selfish and revengeful that she is faced with fitting karma.

The deep and dark hole which the old woman goes down to is, after all, more than a simple eerie pit. It possesses ancestral darkness and an ineffable connection to the spirit world, which should remain unseen. Blinded by revenge she transgresses this unwritten rule and reaches for the unknown. In a reference to the victims of the Atomic bombings of Hiroshima and Nagasaki, which admittedly had an enormous psychological impact on young adult Shindo, the mask disfigures its victims, leading them to beg for their humanity. The director seems to want to express here that there are collective traumas and taboos that are better left respectfully at a distance. The old woman learns this the hard way by committing two grave mistakes: 1. not respecting the divide between life and death, which is physically represented by the outside world and the hole; 2. not accepting the change of time, namely, how at her age she is no longer sexually attractive or dependable.

The wind, one of the most visually-memorable leitmotifs in Onibaba, represents in Japanese philosophy growth, expansion as well as the capacity to learn and increase one’s knowledge. Could it be that the old woman’s stubbornness, pride and general failure to go with the natural flow of life is what is preventing her from living a fulfilling tranquil life? The ending scene, while open for interpretation, will leave few spectators expecting the fate of the older woman to be any other than one of preordained self-destruction. Only through compassion and wisdom, we seem to be told, can we efficiently fight our inner demons. Thankfully we have the masterly direction of Shindo, the uncanny cinematography of Kiyomi Kuroda and the tempestuous soundtrack of Hikaru Hayashi to reminds us of that.

Onibaba is part of the Classics Collection strand of the BFI’s Japan 2020, available to stream on the BFI Player, with live screenings and events to come later in the year.

Paulo Guimarães
Paulo Guimarães is a cinephile concerned with issues of transcultural communication in contemporary cinema. Apart from having written for Vice Portugal, The Asian Cinema Blog and Young European Federalists, he lived and worked in eight countries around the globe.
Read all posts by Paulo Guimarães