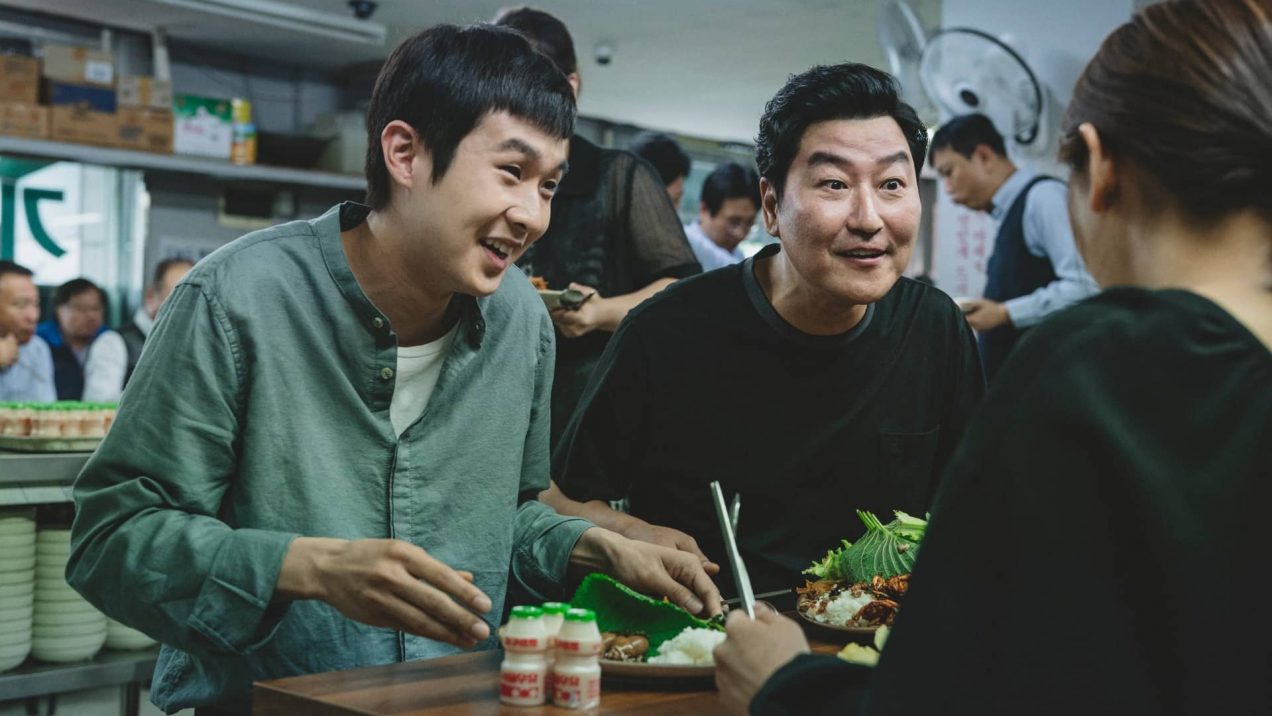 A smart and snappy black comedy with a surprisingly dark denouement…

The gap between the haves and have-nots is at the centre of this sharp and pacy Korean black comedy, written and directed by Bong Joon-ho (Okja, ‎Mother, Snowpiercer, Memories of Murder).

Parasite focuses on the fortunes of the down-at-heel Kim family. They struggle to make ends meet, living in a cramped basement flat and scraping by with a series of dead-end jobs. So when son Ki-woo’s (Choi Woo-shik, Train to Busan) rich graduate friend Min-Hyuk suggests Ki-woo takes over his job as an English tutor for the daughter of the rich Park family, Ki-woo is sceptical. He’s smart enough for sure, but has no qualifications. But in the world of the rich, qualifications matter less than who you know. Despite providing some carefully forged papers to bolster his chances of being hired, Ki-woo is taken on by the ditzy and naive Mrs Park (Cho Yeo-jeong, The Servant) on the spot.

It’s clear the Park family are easy marks and the Kim family embark on an ambitious and audacious long con to extract as much money from the Parks as they can. For a family which relies almost entirely on its wits, the rich Parks appear completely witness. Daughter Ki-jeong (Park So-dam) lands a job as “Jessica,” an art teacher/therapist for the Park’s unruly young son Da-song on a recommendation from Ki-woo. “Jessica” in turn gets the family chauffeur fired and recommends her dad Ki-taek (Song Kang-ho, The Foul King, Sympathy for Mr. Vengeance, The Host) for the job, who arrives incognito. It takes a while but they eventually oust the housekeeper, Gook Moon-gwang (Lee Jung-eun), whose presence in the house predates even the Park family. Like the eponymous creature of the title, the Kims gradually infest the Park home: Ki-woo’s mother Chung-sook (Chang Hyae-jin) completes the setup by joining as the new housekeeper and the money rolls in, peeled off thick rolls of cash by the grateful Parks.

Until this point the action rattles along like a lighthearted heist but then it takes a sudden, darker turn. The Kim family settle in for a weekend of luxury boozing and eating at the Park’s house while the bosses are away on a camping trip. However they are interrupted by the surprise return of the Park’s former housekeeper, who is desperate to get back into the house to collect some of her belongings. Without giving too much away, the Kim family discover that the old housekeeper is even more dependent on the Park’s generous ignorance, setting the new and old home help against each other, with disastrous and tragic consequences.

This final confrontation is exacerbated by the Park family’s sense of superiority and the way they – in this case literally – turn their noses up at the less fortunate, even when it’s a matter of life and death. It’s hard to say much more without spoilers, but the wheel of fortune comes full circle for the Kims and they end up back where they were – or at least some of them do.

Both families’ homes were purpose-built for the film and the spaces are used to great effect to drive the action, with the Park home almost a character in its own right. It certainly has hidden depths.

Parasite is an incredibly well-constructed story which packs a real punch. Its Hitchcockian in pace and tone: funny, horrifying and bittersweet in turn. There are lots of lovely little plot details which take on greater significance as the film progresses: a child’s artwork, a series of lights on a set of stairs, family meals that become more lavish as fortunes improve. It also has a fantastic ensemble cast, but Choi Woo-shik stands out for his portrayal of the thin-skinned student so desperate to be accepted into the world of the haves. Song Kang-ho, who’d be fantastic in anything (and is), also gives a beautifully nuanced performance as a man who manages to (nearly) always force a smile and dust himself off despite enduring a barrage of tiny humiliations and setbacks.

It may not be Bong’s most nuanced work – Memories of Murder and Mother are both arguably stronger because they are more open-ended and less neatly resolved.  But this neatly constructed tale of social polarisation is one that will resonate with many audiences.

Parasite is released by Artificial Eye on 1 June on DVD, Blu-ray and a Limited Edition Steelbook which will include both colour and black & white versions.