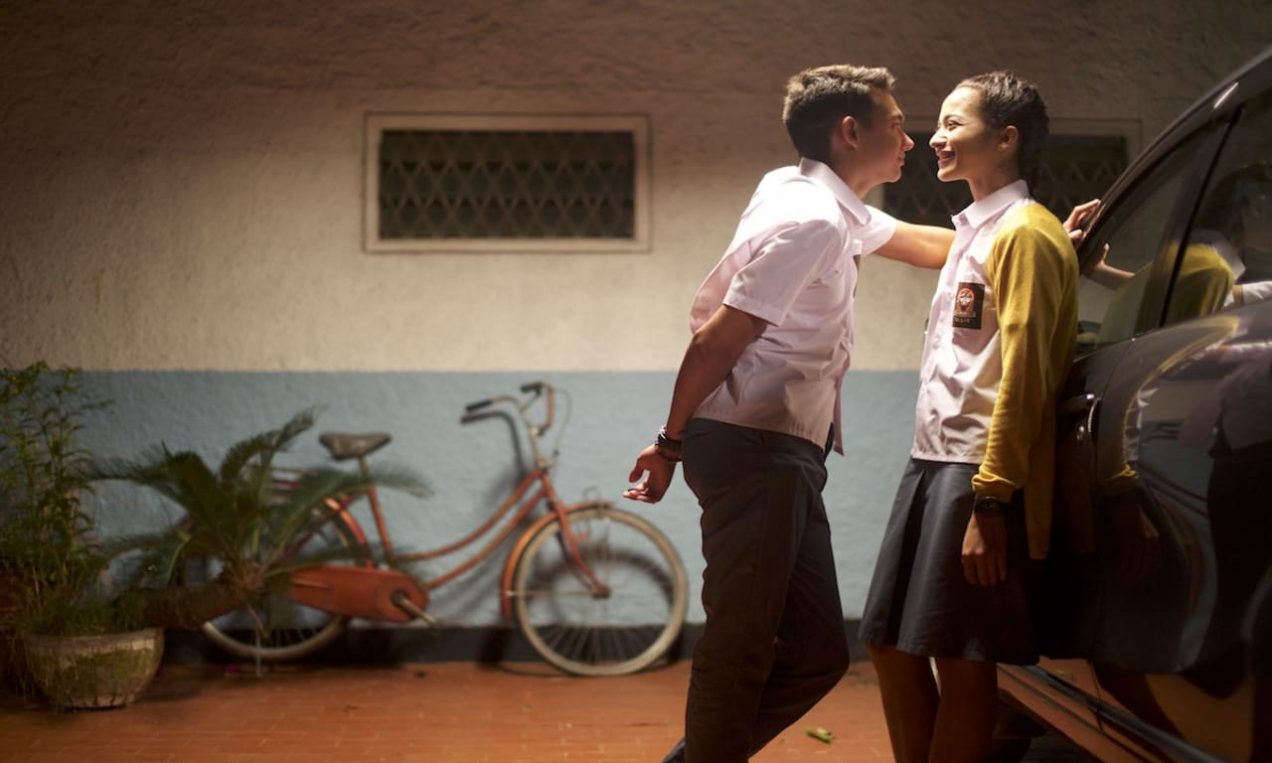 Remember the first time your heart fluttered when your crush passed by the school hallways? Or when you and your first love would take turns to steal sneaky glances at each other from across the classroom? We’ve all been through the throes of high school puppy love, filtered memories tinged with rosy retrospection and romanticism. But Indonesian film Posesif takes the oh-so-predictable teen romance genre a step further by turning its eye to the darker side of early adolescent romance: addressing the often-overlooked issue of relationship abuse, and portraying how it can occur from young, during a seemingly harmless courtship among pubescent teenagers.

When national diving athlete Lala (Putri Marino) meets Yudhis (Adipati Dolken), a new transfer student at her school, the two are immediately smitten with each other. They dive headfast into a romance, but things turn complicated when Yudhis begins exhibiting controlling, possessive and even sociopathic tendencies. Think 33 missed calls to Lala when she is out with her friends, checking her phone messages and causing casual harm to anyone around his girlfriend who may be a threat to her success and their relationship.

Posesif is the first commercial feature by leading Indonesian arthouse director Edwin, who is better known for his independent films Blind Pig Who Wants to Fly (2008) and Postcards from the Zoo (2012), which premiered at the International Film Festival Rotterdam and the Berlinale respectively. Tackling the socially relevant issue of abuse, Posesif is spot-on in its illustration of the dynamics of an unhealthy, codependent romantic relationship and the vicious cycle Lala finds herself mired in.

A creeping sense of unease permeates the film, thanks to Indonesian heartthrob Dolken’s portrayal of the emotionally manipulative, smooth talker Yudhis, who switches from violence to sweeping gestures of apology and contrition at an alarming normalcy. He begins by guilt-tripping Lala when she wants to leave their date early to go for training (“Am I your driver or boyfriend?” “You’re first place in my heart, doesn’t matter if you are 10 minutes late”) and tries to brainwash her into thinking her father and friends do not understand her (“You and I are the same. They’re asking us to be like them.”), before gravitating towards more extreme exertions of dominance. Dolken’s menacing performance induces several tension-filled moments in the film, which could have very well slipped into full-blown pyscho-thriller territory without Edwin’s restraint.

Meanwhile, newcomer Marino plays Lala with enough earnest innocence to remain sympathetic onscreen despite her naivety, for she sees her boyfriend’s destructive jealousy as merely a measure of his love. Identifying the early warning signs of abuse is a tall task for the romantically-inexperienced Lala who believes she is the only one who can fix the broken Yudhis, and Posesif demonstrates the continuous push-pull volatility both leads subject themselves to, and are unable to escape.

A jarring tonal shift in the third act, however, trivialises the film’s original intention to serve as a meaningful social commentary on relationship abuse. The later overdramatised behaviour of Lala and Yudhis could be a deliberate attempt to pander to mainstream audiences’ expectations and lighten the grimness of the subject matter, but the comedic turnaround makes it difficult for the viewer to take the film seriously after. And while one appreciates Edwin’s attempt to give Yudhis more dimension by providing insight into the origins of his abusive nature, the revelation of his backstory appears so late into the film that it ends up feeling contrived.

There is a tastefulness to the high production values of Posesif, with the film offering a stellar soundtrack of catchy, indie music, as well as captivating cinematic visuals when Lala dives, the only time in the film she seems to be unencumbered by the expectations of those around her. Aerial shots of her fluid airborne tumbles as she leaps off the springboard, or aquatic imagery of her laying still underwater amid the vast expanse of the pool, lend the film an air of calm and serenity, symbolically belying its darker undertones.

Posesif screened as a part of the 28th Singapore International Film Festival, which ran from 23 November – 3 December 2017.