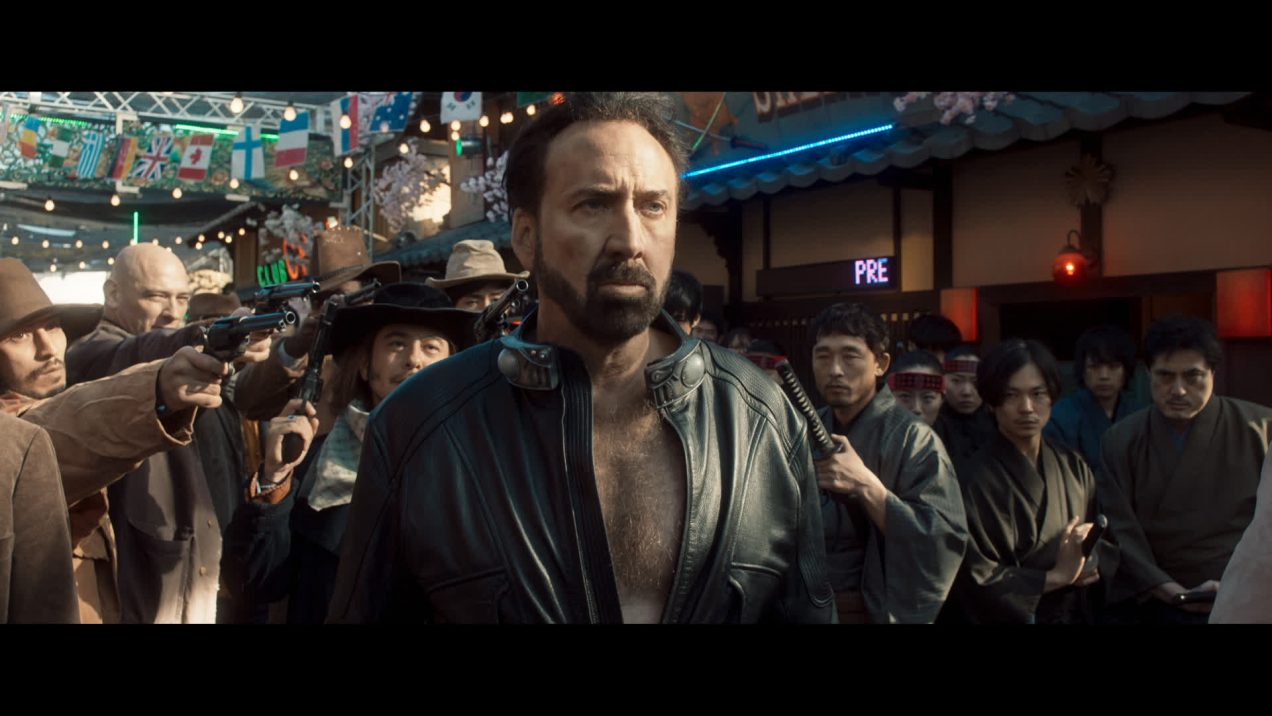 The story is simple enough – Nicholas Cage is Hero, a bank robber, who is sprung from jail to rescue Bernice (Sophia Bouteller) the adopted “granddaughter” of the town’s Governor (Bill Mosely) who has run away. Suited up in a leather overall that is wired to explode if he fails, he sets off to the Ghostland to retrieve her and earn his freedom. However, when the credits rolled and the lights went up, my friend James turned to me and asked “What the f*ck did I just watch?!” Days later and it’s taken me until now to be able to verbalise how the experience of this Sion Sono makes me feel. Experience is the right word as well for this expertly blended, technicolour bright and dark samurai western.

The script, written by Aaron Hendry and Reza Sixo Safai is a mix of Japanese and English dialogue, and so perfectly suited to Sono’s style of directing. Initially, an action script that was brought to Sono 3 years ago there was enough room for his own creativity to be inserted as he realised his dream of directing an English Language film. How much Sono adjusted the story to suit his own sense of humour and vision is unclear, but with a director like Sono who always has a strong idea of what he wants, combined with a leading man who has an equally strong vision of what he wants to be in and you have a final result that is distinctive and surprising. It’s clear the cast enjoyed the whole process and I can’t help but feel a little envious they got to film this in Japan for the full Sono/Cage experience.

The sets from production designer Toshihiro Isomi (Battle Royale 2, After Life) are wonderfully diverse. Samurai town is technicolour bold with traditional architecture and a sense of false fronts that echo the nature of the town. Ghostland is drab in colour and enmeshed in detritus and scrap, a giant clock, people trapped in mannequins, mad max style trucks and head gear. Combining this with the costume design from Chieko Matsumoto (Tokyo Tribe) who uses everything from exquisite finery for the girls of Samurai Town to barbed wire and detritus for the denizens of the Ghostland and you have a wonderful texture to the visuals that keep your eyeballs engaged at all times. The cinematography of Sôhei Tanikawa who worked on three other of Sono’s films suits this style of film-making – especially when Hero transitions between the locations and his vivid memory of the bank robbery that went wrong.

It has far more layers and depth than its gonzo facade might impress, with time being one of the key themes through its narrative. Hero has limited time to succeed in his mission, the Ghostland people are trapped in time, even the clock in the Ghostland that the denizens are attempting to keep still is set to 8.14am, one minute before the detonation of the atomic bomb in Hiroshima. The characters are held hostage by the ticking clock, memory traps them in trauma and the trauma has consequences. One can even wonder if Samurai Town is even a real place with its mix of cowboys and geishas. Everyone is trapped one way or another, be it a pretty locale or a wasteland. A reflection on modern times and its relationship with history or just an apocalyptic fuelled nightmare – It’s up to you to decide, Sono leads the way, but he won’t make that conclusion for you.

Prisoners of the Ghostland screened as part of Terror-Fi 2021 in Wellington, New Zealand and comes to Shudder from 19th November.