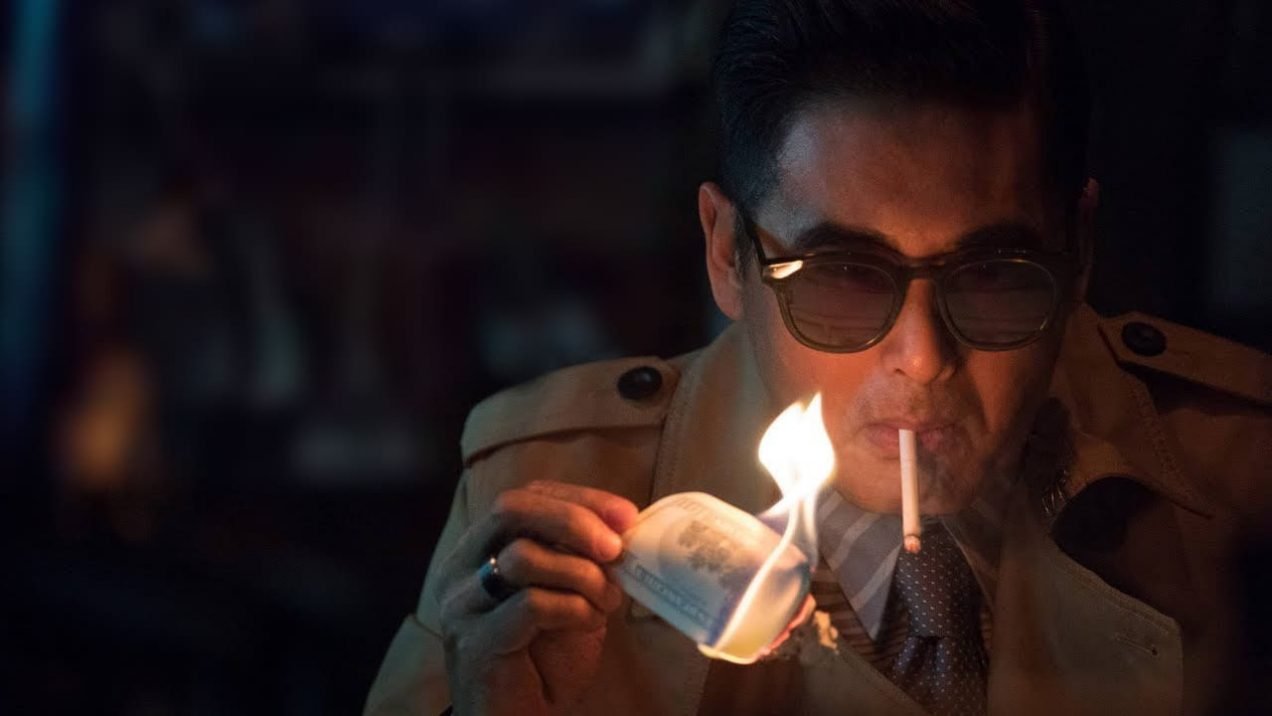 Still looking like he’s in his 30’s at the age of 63, and still one of Asia’s biggest actors, Chow Yun-fat has achieved God-like status among fans. Slowing down his workload due to advancing age and health, Chow has only made a few films in the last few years, a far cry from his peak in the late 80’s wherein he made at least four films a year. Teaming with Aaron Kwok for the second time in so many years after the potboiler Cold War 2, Project Gutenberg has all the ingredients to be an entertaining ride, which is the case a lot of the time. However, an at times dodgy first half lets the film down.

Lee Man (Aaron Kwok) is taken out of a Thai prison and interrogated about his involvement with a master criminal only known as Painter (Chow Yun-fat). In flashback, we see how the two came to carry out an incredible criminal plan. Lee was a struggling painter living with his girlfriend Yuen Man (Zhang Jingchu, Beast Stalker), until one day Painter turned up at her art exhibition, criticising Lee Man’s only painting in the exhibit as derivative. The two meet and Painter offers Lee Man the opportunity to take part in his counterfeiting operation, as he can see Lee Man is a master at illustrative copying. So begins a wild ride as the cops close in on the gang and Lee Man and Painters relationship is strained to breaking point.

A very interesting plot develops and becomes more cohesive with real tension come the second half of the film. Unfortunately, the first half takes too long to get going despite an initially good set up, and there are pacing problems due to a lot of exposition and not enough action. In fact, after the first action sequence, I was deflated. There is little bite in the shot selection, editing and conviction. However, the fallout from the scene is well-developed as it is revealed the extent of Painters ruthlessness, to the point of derangement.

One of the films best aspects is Chow’s character; a complete subversion of his classic criminal character we saw in countless 80’s and 90’s flicks, especially of course John Woo’s masterpieces A Better Tomorrow and The Killer. It is a wonderful surprise, and you can see why he chose the role. Painter is a heartless bastard, ready to kill anyone who gets in his way, with no regard for anyone but himself. Anyone who has seen those earlier films knows while his characters were killers, they had an internal morality and spirituality, with a love for their friends and lovers. The most moral thing Painter does in the narrative is constantly telling Lee Man that he must win back his old girlfriend Yuen Man.

In recent years we have seen quite a few films which are throwbacks and reference classic Hong Kong cinema, with a kind of longing but reverence for that time. Among them are Wong Jing’s From Vegas To Macau trilogy, the first two of which are great fun, the third of which had me reaching for the razor blades. They featured an extension of Chow’s character in the 1989 movie God Of Gamblers. What Project Gutenberg does which is so interesting, alongside the aforementioned character subversion, is give us setups that have happened before in famous movies such as Full Contact and The Killer. Especially a subplot that involves Lee Man saving a girl who becomes injured in a fire and pays for her surgery, an amalgam of subplots in both previously mentioned films. Painter treats her like a piece of shit on his shoe. These references and subversions at first seem like a novelty, but come the end twist this becomes intelligently written and actually a great idea. To go into more detail about this ending would be to give too much away, suffice to say it is a superb surprise, and those who love trying to guess twists will have a field day.

The film is more of a crime thriller than an action one, and after the first action set piece, I wasn’t expecting much. However, I was pleasantly surprised with the centrepiece action sequence, and with a choreographer like Nicky Li (SPL 2) you would expect some good stuff. Taking place in a military camp, the pyrotechnics, choreography and long takes are all of a very high standard, and it’s exhilarating to see Chow taking down baddies with first his patented two handguns then two assault rifles, then a shotgun. One shot wherein Chow flies through the air in slo-mo with the shotgun, fires, cut away to tire bursting in normal motion, cut back to Chow still diving, reloading and firing again, had me reaching for the rewind button.

Unfortunately, the action scenes are nearly ruined by an aspect that is killing the Hong Kong aesthetic; lamentably bad CGI. Explosions look like they could be in a PlayStation 2 game. It’s such a letdown, one that degrades the film. Fortunately, writer/director Felix Chong (Overheard and Infernal Affairs series) has good enough pedigree and taste to present a consistent aesthetic, with strong filmmaking across the board. Aaron Kwok proves his range with a multi-layered performance that makes you feel for Lee Man, and he handles the development of his character well.

Project Gutenberg has a lot of elements that bring it into the higher echelons of recent Hong Kong crime movies, and succeeds on a lot of levels, it’s just a shame about the problems with the opening hour and the CGI. There’s plenty to recommend it for, especially for those fans of classic Hong Kong movies and the ageless Chow Yun-fat.

Project Gutenberg is currently on release in Hong Kong, and will screen as part of London East Asia Film Festival 2018.