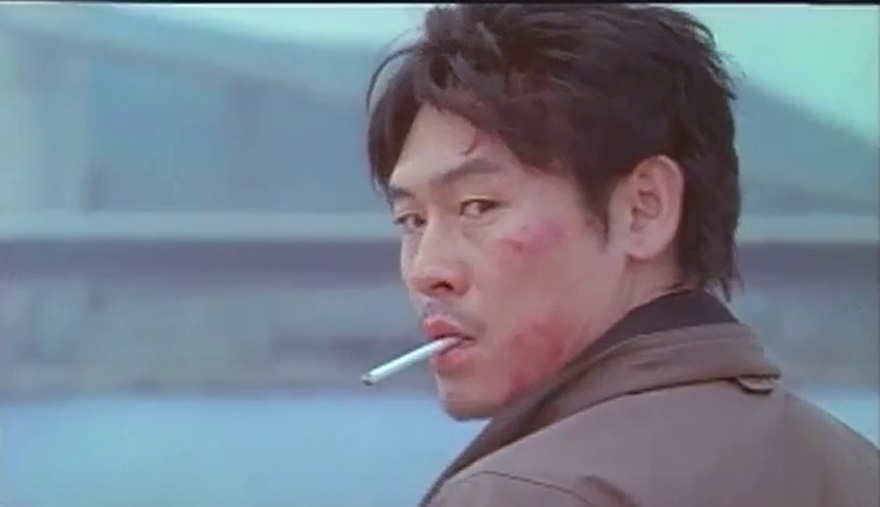 Part slapstick humour and part neo-noir, Kang’s Public Enemy is a schizophrenic and in the end unsatisfying box office hit of the early 2000s…

Back in 2002, the South Korean film industry was on the verge of conquering every cinephile’s heart around the globe. Park Chan-wook’s Joint Security Area (JSA) (2000) already placed the Korean cinema on the map, but directors like Bong Joon-ho were still perfecting their craft (although Barking Dogs Never Bite (2000) is an underestimated piece of work) to accommodate themselves to the new capital-intensive film industry and the leading role South Korea would play on a cultural level in Asia and beyond. One of the highlights during this exciting time in the film industry is, according to the box office, Kang Woo-suk’s Public Enemy (2002), seen by nearly 3 million Koreans.

The plot is your typical police procedural, but with a twist: the antagonist and killer accidently stumbles upon our hero (a corrupt cop named Chul-joong) on a rainy night just after he brutally murdered his own mother and father. When Chul-joong is assigned to solve the double murder, he connects the dots and is certain that the strange figure on that very same night is the actual killer. When he meets the parents’ son, he suspects him immediately and sets out on a quest to prove he’s guilty. Because of his poor reputation, nobody accepts his improbable hypothesis and when Chul’s investigation becomes more and more aggressive, his position as investigator becomes untenable. Of course, we, the audience, already know the son is guilty just like the main protagonist does. What’s even more, it’s not like something is at stake, as in the (superior) Korean police procedural Na Hong-jin’s The Chaser (2008). In Na’s film, an innocent woman will come to her end if the killer is not captured soon enough. Here, on the other hand, there’s no clock ticking: it’s a cat and mouse game, and a mildly entertaining one for sure, but the film lacks conflict. The dramatic tension all revolves around the protagonist proving his environment that, although he’s a crooked cop, he’s right this time. All the elements for a suspenseful thriller are there nonetheless. Especially the prime suspect and killer, a high class manager with a passion for killing on the side, promises to introduce us into a bleak but interesting world. The antagonist seems to be heavily inspired by the character from Mary Harron’s American Psycho (2000). The film’s premise is, with this comparison in mind, the following: what would happen if Christian Bale’s character would not live in a dark, estranged universe that’s reflective for his psychopathic mindset as in Harron’s picture, but in an ordinary world where a good-for-nothing cop is after him? Promising as it sounds, however, the film fails in delivering a message to its audience, like a stand-up comedian telling a dull joke without a punch line.

At the same time and strange enough, Public Enemy is competently made. The cinematography is, although not mind-boggling or impressive, effective in its simplicity. Especially the intro is compelling, as a well-edited montage sequence is accompanied with Chul-joong’s monotone voice-over. As time passes by and the plot takes over, the camera just serves to register the action as clear as possible; a minor setback in comparison with the promising visual feast in the beginning, but certainly not a deal-breaker. The same downward trend is applicable to the acting. The cast seems not particularly gifted with a sense of subtlety, but this has undoubtedly something to do with the film itself. The men – there’s no room for any significant roles for women in this film – often shout out loud and insult each other, slapping one another with whatever they seem to get a hold on. Their overacting is intentionally (?) comical, suggesting a strange blend of slapstick humour in a film about a killer on the loose. This seems to be at the heart of what’s wrong with Kang’s film.

To be fair, the film succeeds in entertaining but falls short in transporting us in a fascinating world. Sure, Public Enemy is – as movies were marketed in the Golden Era of Hollywood – not only capable of shocking us, but also manages to make us laugh (a tad too often), to excite on a sensorial level with well choreographed fights and – only very briefly – to make us care. It has something to offer ‘for everyone’. A family movie, if it were not for a few gory scenes, worth seeing by everyone but at the same time by no one. If Public Enemy proves one thing, it is that some genres just beg for a certain mood and guts. Guts to form a certain coherent universe: a comical, dangerous, strange or careless world. Public Enemy, on the other hand, is a mere mash-up. Sometimes this leads to unintended comedic moments. One instance the images suggest a world inhabited by darkness, corruption, greed and amorality, hinting at a true neo-noir. Not much later, however, a cheerful pop song accompanies an evenly corny montage sequence. Suddenly, we’re right in the middle of a mediocre action flick from the eighties; as if we were taken from Se7en (1995) to The Karate Kid (1984) in the blink of an eye! But more often than not, the comedic moments are intentionally written in the script. Kang (Moss, Fists Of Legend, Two Cops) clearly makes fun of its own material. Because of this, the film feels incredibly underwhelming considering the potential and the set-up. The tone and atmosphere is much like a buddy-cop movie (without the buddy cop, that is), but the tone is not in line with the story it tries to tell.

Maybe this has something to do with the specific context of the Korean film industry as it was in 2002. Kang’s film was released just when the Korean film industry became immensely popular and at this point, directors were still searching for a magic formula to capture the attention of as many moviegoers as possible. As it turns out, the identity of the Korean film in this new age would be characterised by irony, the blending of genres and a new sort of auterism. Some Korean directors, like Bong Joong-ho, manage to blend the tragic with the comedic quite well, and Kang’s film should be perhaps considered an experiment: the ludicrous comedic elements are perhaps the result of a certain fear to tackle such a brutal and dark story in an evenly brutal, dark and serious way and style.

This has serious consequences. There are not much emotional peaks in Public Enemy’s narrative and there’s not much suspense in any scene, which is a deal-breaker in a film marketed as a thriller. The police procedural work is evenly, well, obvious: there’s no ingenious twist or any interesting procedural investigation going on (contrary to Johnnie To’s iconic film PTU (2003)) and the film decides early on to settle for a plot anyone who saw a crime film in the past 40 years could easily figure out.

In connection with its comedic undertone, Kang refuses to take the film’s subject matter seriously. Although Chul-joong is a dirty cop, takes no responsibility for his duties and is an immoral person, the film lacks any ambition to explore this thematic undercurrent. There’s a certain tendency with such anti-heroes, especially in Korean films, to acknowledge a moral ambiguity and explore the fine line between hero and villain. Here, on the other hand, Chul-joong is the unquestioned hero and the bringer of justice. Especially the climax and the message it tries to convey is extremely disturbing and simply reactionary. It is unquestionable that this movie wants to be seen, by as many moviegoers as possible. It intentionally manages to be not provocative and to be a comedy and a thriller at the same time. This does not imply, however, that it’s a movie worth seeing.

Kristof Boghe
Kristof Boghe just finished his master in communication sciences at the Catholic University of Leuven, Belgium. As his main interest lies in the political and ideological significance of the medium, he pursues a PhD in film studies. Read reviews/articles »
Read all posts by Kristof Boghe