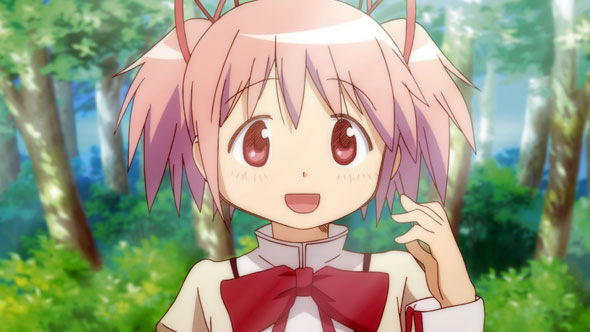 A great leap in quality for the Magical Girl genre…

“Magical Girl” is one of the main genre of Japanese animation, alongside “giant robots”, “sports”, “fighting”, and the like.

This genre has a long history: it probably started in 1962 with ひみつ のアッコちゃん (Secret Akko-chan, animated by Toei Animation), and got most of its defining characteristics from 魔法使いサリー (Sally the witch, Toei Animation) and, later, 魔法のプリンセス ミンキーモモ (Magical Princess Minky Momo, Ashi Production).

Magical girls were sometimes non-human, coming from magical places to Earth as a rite of passage (yes, Kiki counts as a magical girl anime); more often and more recently, they’re normal girls who receive magical powers through an object donated by aliens, or magical / divine (in the Shinto sense) beings.

In deference to these tropes, Madoka Magica opens with the cute-looking alien Kyuubee offering to make Madoka, a normal shy schoolgirl, into a magical girl to save people from evil witches. In a significant departure from the standards of the genre, though, this does not happen in a common and tranquil setting: it happens inside a nightmare scene where another girl is fighting for her life and clearly losing. The psychological pressure that Kyuubee brings to bear on Madoka is nearly overwhelming, and the scene sets the tone for the entire series.

I have to say that I hate Kyuubee, so much so that I bought a life-size stuffed doll of it, to punch, as a stress-relief aid. Even if you ignore the opening scene, and pretend that Kyuubee starts out very much like any other magical girl companion, you’ll feel pretty soon that something is not right, that its promises are a little too vague, its empathy a little too forced. And while the series progresses, the feelings of wrongness and alien-ness keep growing. Sure, it gives magical powers to young girls, makes one of their wishes come true, allows them to help people by fighting witches… but the cost is too high, the fighting too hard, the reality of the wish always disappointing. Only Homura and Madoka manage to turn their wish into something fully positive, but it’s more thanks to their stubbornness and determination, than to Kyuubee and its ilk.

In addition to a deep and gripping story, and to characters that provoke strong emotional responses, the technical aspects of the series are also well above average: from the music (written and performed by ClariS and Kalafina) that perfectly sets the mood, to the animation, flawless both in the slow, contemplative scenes and in the fast action of combat. A special mention must be made of the depiction of magic: raw, barely controlled near-omnipotent magic, distorting the structure of the universe at every level, it’s shown as psychedelic collages that follow their own crazy internal logic (and those wings of raw power at the end of the last episode still send chills down my spine!).

I’ve watched this series twice from beginning to end, and the last three episodes at least twice more. This happens rarely to me, but Madoka Magica is just worth it.

With almost fifty years of history, you’d think that the Magical Girl genre had been thoroughly explored and very little new could be written in it, and if you looked at most recent offerings you’d be justified in confirming your opinions. And in this lays a good part of the importance of Madoka Magica: I think, and hope, that just like Neon Genesis Evangelion infused new life into the “giant robots” genre, echoes of Madoka Magica will rapidly be seen in other Magical Girl series. Eva took the well-known elements of the robot story (alien invaders, reluctant pilot, collateral damage) and re-framed them more-or-less explicitly as a psychological analysis of social interactions. Madoka takes the Magical Girl tropes (wish-fulfilment, friendship, responsibility, helping people) and re-frames them in cosmic terms, making the protagonists directly relevant to the world at large.

If you hadn’t noticed, I consider Madoka Magica one of the best series of the last few years, and I’m trying to convince all my friends to watch it: all of those who’ve seen it has only good things to say about it. I can only hope that this review will convince you, and that you’ll see how an old genre and overused devices can be given a glorious new life.

Puella Magi Madoka Magica: The Complete Series is released on UK Blu-Ray and DVD on 29 October by Manga Entertainment.