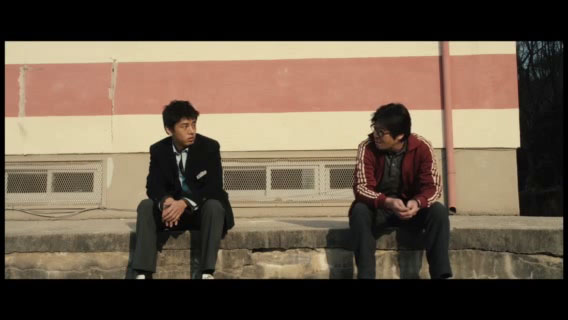 “Hey you, Wan-deuk!” screams Dong-jo, Wan-deuk’s teacher and neighbour. He yells those words so many times that the boy perceives it as its nickname, a nickname for what he will remembered in the days to come. His father was an hunchback working for a cabaret club as a dancer together with the childlike Min-goo, and as you can imagine, they had never lived bathing in moneys, but now for them the bad days are beginnings and things are getting worse when the club closes and his father loses his job.

Wan-deuk lives in a poor district with annoying neighbours, without a mother and with him, Dong-joo, for whose death the boy prays every time he goes to church. Since he has no friend, his enemy is the closest thing to a friend Wan-deuk could have, and it’s not just a case that their friendship will grow when Dong-joo declares to have discovered who’s the boy’s mother.

The movie is introduced like a sort of sport drama because of the presence of several kick-boxing scenes, a sport to which Wan-deuk will fall in love with, but Punch is far from being the story of a boy who’ll find redemption by reaching fame and glory as an athlete. South Korean director Lee Han hasn’t done anything like this.

Adapted from Kim Lyeo-ryung’s novel, Punch is a tale of growth based on the contrasts given by the same old movie clichés: the relation between a student and his teacher, who’s a rude, strange guy used to beat his pupils with a stick, but at the same time he’s the most comprehensive person his students could ever find. Everything is built on the character’s power to absorb the audience with their well written story that help us to really think they could be real thanks to some warm and unforgettable scenes.

Punch is filled with the absence of the search for the audience’s tears. It misses the attempt to move the viewers with sadness, but it does it with some simple and easy camera movements which are cut to the bones so that the directing won’t stole the scene from the great cast composed by Kim Yun-Seok (The Chaser, The Yellow Sea), exceptional in the role of Dong-joo, and Ah In Yoo in the original title role, Wan-deuk. The actor’s skills are Lee Han’s supporting beam, everything exists just because of their gestures, their expressions in order to stay on their genuine acting, which creates a rare alchemy together with the perfect dialogues written by Kim Dong-woo.

Inside the poor areas portrayed in the movie, between the narrow and large streets badly lit during the night, this is where the story of a boy who meet his Filipino mother in tiny flats where loads of people live in. The small apartments where Han Lee brings us are places in which everyone could feel at home. Those characters who live on the screen become our neighbors, they call us like Dong-joo does by screaming continuously “Hey you, Wan-deuk!” making us feel like one of their friends, entertaining us like few movies do in these days.

Punch is avalable on Region A Blu-Ray and Region 3 DVD from YesAsia.