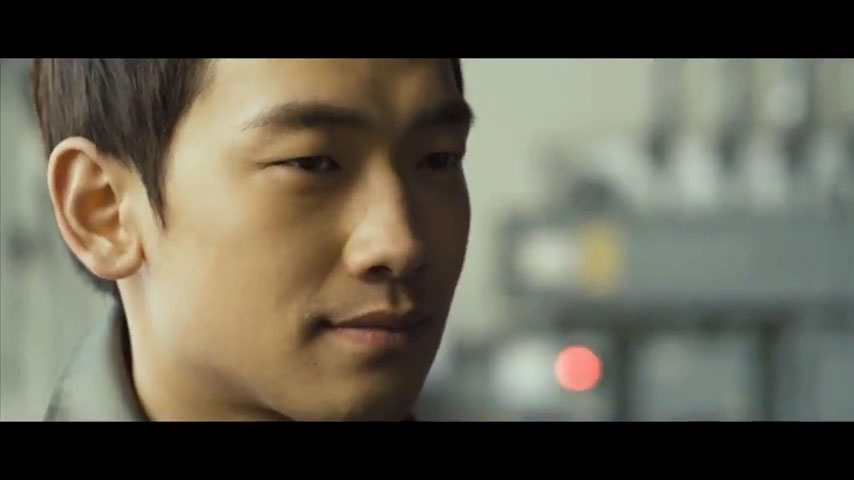 Right from the outset director Kim Dong-Won let’s you know what to expect. Rain (I’m A Cyborg But That’s Okay, Ninja Assassin, Speed Racer) plays the arrogant Jung Tae-Yoon, drummed out of elite Black Eagles flying squad for pulling a stunt so stupid in the real world he’d have been court-martialled.

But hey, he made a girls skirt fly up! How cool is that? And we’re not even into the opening credits yet. Time for our cocky jock to mount a motorcycle and race a glider to his next destination, the 21st Fighter Wing, where Jung will learn some discipline. At least you’d think so, wouldn’t you? Instead there’s just as much messing around in the real armed forces. (Shockingly, the Republic of Korea Air Force is alleged to have been heavily involved in supporting the filming – do they really see this as recruitment material?)

Jung soon starts ingratiating himself with his new colleagues, including squad leader and single father Park Dae-seo (Kim Sung-soo, The Red Shoes, Hellcats, The Sweet Sex and Love), who might as well have ‘dead meat’ tattooed on his forehead, and Yu-jin (Lee Ha-na, Dance of Time, Le Grand Chef) who has a crush on Park. Then there’s former top gun Major Yi Cheoul-Hee (Yoo Jun-sang, Tell Me Something, Moss, The Day He Arrives, Ha Ha Ha), who for some reason thinks Jung is a waste of space. But we know better, right? (Hello, real world? Anyone?)

Much of the first half is played like a romantic comedy, with Jung wooing love interest Technical Sergeant Yoo Se-Young (Shin Se-kyung, Hindsight, Acoustic). Yes, she’s the glider pilot from the start, how weird is that? But hang on, wasn’t there something about returning to a base in the title? (At least in the original title, that is…)

Cut to North Korea, and a menacing looking general mercilessly blowing some guys brains out. Whoah, we’re back to the cold war! But just to play it on the safe side, he’s planning a military coup to take over a nuclear missile. Yeah, we’re not saying all commies are like this, but they do all seem to work in underground bunkers. Mind you, they probably can’t afford the electric bill, so maybe that’s an accurate depiction?

Then a North Korean fighter pilot with an ominous skull painted on the side of his plane enters South Korean airspace. (The Red Baron, perhaps? Quick, somebody sing ‘Snoopy’s Christmas’ and bring a little peace to this land!)

Well, at least it looks like we’re finally going to move on to a bit of action… At last!

Allegedly this is loosely based on the popular classic 1964 film called The Red Muffler (aka The Red Scarf) by Shin Sang-ok, but if anything we seem to have been returned to the 80s. And a vision so full of clichés that for much the film I was convinced I was watching a spoof, expecting to see Charlie Sheen and his tiger blood, not even Tom Cruise. The first half is so messy in tone and plotting to be almost entirely disastrous. There are more tragic backstories than an X-Factor final, and as such a pretty good ensemble cast, including Jo Seong-ha (Helpless, Always, The Yellow Sea) and Oh Dal-soo (The Thieves, Oldboy, Thirst) is almost entirely wasted.

To be fair, the aerial action is fantastically shot, with the CGI hardly noticeable and the scenes nicely edited – though often it’s a little too brisk. I found it quite hard to follow what was going on, and just who was who under the goggles and oxygen mask with distorted voices on the radio. It’s interesting to note that the closing montage, which appeared to be stock footage of real planes (a requirement of the Republic of Korea Air Force’s cooperation perhaps?), looks dull and pretty lame by comparison. It’s even pretty highly pixelated!

Occasionally the aerial acrobatics seem in poor taste. As one fighter plane heads straight towards a skyscraper in a business district, it’s hard not to recall the twin towers. I’m pretty sure the filmmakers were referencing James Cameron’s True Lies, but are we still a bit close to that devastating event? It seems a little in poor taste, or is that just me?

For me the one redeeming moment was when, having found little during the film to elevate it’s female cast and pilots to be the equal of their male counterparts, still cooking and cleaning for undomesticated menfolk (which, I’m sorry to state this again, you don’t really get away in the armed forces!), the film finally gives one of it’s female leads the upper hand. Yu-jin is given the chance to get her own revenge on the mysterious enemy pilot, rather than cheer from the sidelines.

And yet, by doing so director Kim Dong-Won jettisons the thrilling dual that should have happened between the ‘Red Baron and our hotshot Jung Tae-Yoon, just as the film goes all Star Wars as he tries to blow up the Deathstar, sorry, I mean nuclear missile.

I can’t help thinking some of the international variations on the name, including Black Eagle and the US Soar Into The Sun, are little more than an attempt to make the film a moving target, so potential audiences aren’t sure if it *is* Return To Base or not.

For Rain fans there’s an inclusion of a ridiculous scene where he and his main rival Yoo Jun-sang wrestle with tops off in a changing room, all covered baby oil, but even that isn’t enough to save this film! It’s not even ‘so bad it’s good’. Perhaps only for true Rain devotees…

R2B: Return To Base aka Black Eagle screened as part of the 7th London Korean Film Festival 2012 and is available on UK DVD from eOne.

Special Features include Making Of, Introducing The Characters, Filming and Gravity Testing.