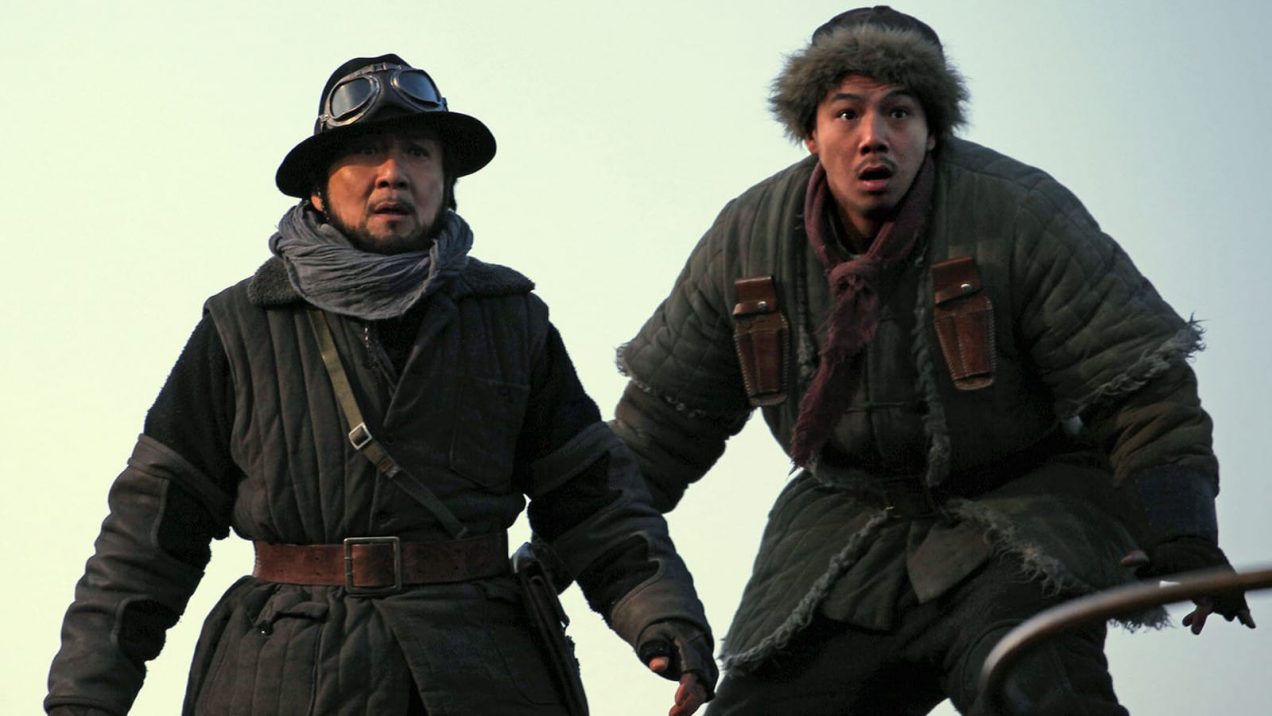 This year Jackie Chan has no signs of letting up, despite his age. The first of his output comes in the form of Railroad Tigers, another collaboration with director Ding Sheng. Their first collaboration Little Big Soldier many count as one of the best Chan films of the last ten years, this writer included. However Police Story: Lockdown in my opinion was a misstep. Railroad Tigers came with a press release stating it is a return to the glory days of movies such as the masterful Project A. Certainly misleading, but the spirit and entertaining vision is there.

The plot revolves around Jackie leading a gang of miscreants who are full time railroad workers and freedom fighters. Set in 1941, when Japan had extended its occupation of countries in Southeast Asia, Jackie is a kind of Robin Hood figure who robs the trains of food to give to the starving Chinese. The gang get involved in a plot to blow up a bridge that is important to the Japanese, thanks to the involvement of a patriotic Chinese soldier.

One of the most notable things about this film is the casting of Jackie’s son, Jaycee Chan in a supporting role as one of the tigers. As we may all remember, Jaycee was busted for Marijuana possession 2 years ago, for which he served 6 months in jail (thanks to Jackie’s status). After the jail term, the two reconciled. Jaycee does well in his role in the film, and there is a great father and son comedic scene. Jackie himself, while not playing against type, puts in a performance that is more than diverting despite his characters lack of depth.

Most of the comedy hits the mark, and there are some good ideas that don’t smack of overuse. This is both in terms of physical comedy and wordplay, while the former takes presidence. One scene with a rope and explosives used as weights is especially ingenious. However, those expecting the usual Chan Martial Arts will be disappointed, like I was. There is not a single fight scene of note in the entire movie, just little scraps here and there. The film would have gone up in my estimation if there was one satisfying Jackie-style fight scene. It’s unfortunate, but the film makes up for this with spectacle, stuntwork and good pacing.

With a budget of US 50 million, you would expect some good action, and it is delivered. The climax of the film is wonderfully staged and delivered, with some above-average (for a Chinese film) CGI. There is never a dull moment despite its running time, and you are never far away from a good set piece. The cast all aquit themselves well, especially Hiroyuki Ikeuchi as the villainous Japanese commander. He really gets his teeth in to the role, and provides some amusing moments, despite the sometimes laboured Chinese vs Japanese plot device. It’s interesting to compare his role in the film and Ip Man, with Railroad Tigers providing him with a three dimensional and developed character, not just there to pin the blame on.

Problems with the film arise with the amount of peripheral characters who serve little purpose to the plot being introduced, and the film can be hard to follow due to this. Director Sheng handles the action well, but there are parts that fall flat. The lack of hand to hand combat is a big let down, and reminds me of Sammo Hung’s The Bodyguard, which despite being a drama had some great fight scenes. Surely Jackie’s not so old that he can’t engage in some decent fisticuffs? His last film Skiptrace, not as bad as some said, contained some of his least adrenalin-pumping fight scenes. Let’s wait to see if Kung Fu Yoga reinstates his mastery of onscreen fighting.

Railroad Tigers for me is one of the best Jackie films of the last ten years. Although not up there with his earlier work or the superb Shinjuku Incident, if you’re a fan definitely check it out.

Railroad Tigers was released in China on 23 December 2016.